A look at what went into creating the Cadillac Lyriq—and what it's like to drive this important new electric vehicle. 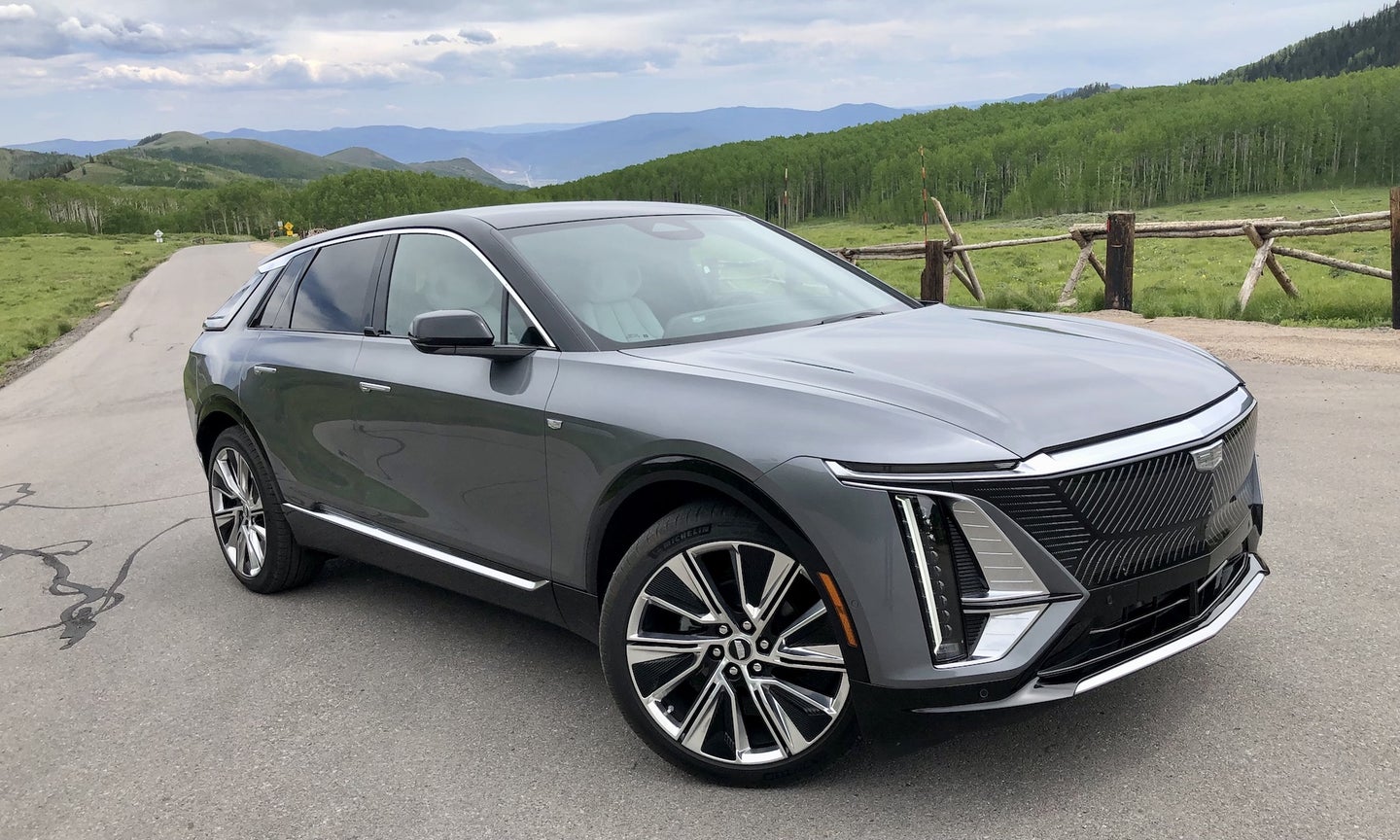 The balance between form and function is always a delicate one when carmakers introduce new models, as the fantastic shapes conceived by creative designers meet the harsh realities of government regulations, manufacturing requirements, and everyday useability.

But the team behind Cadillac’s new Lyriq battery-electric crossover insists that this time, the good guys won. That means that the designers got to keep most of the flavor of the Lyriq concept car. Meanwhile, the engineering team got to flex its own creative muscles by noodling out ways to let the designers’ dreams live within the real-world constricts that usually cause production models to be disappointingly dull in comparison to the concept car.

Here’s how it all came together—and what it’s like to drive.

Computer-aided engineering (CAE) was a crucial tool in this achievement, reports Cadillac Lyriq executive chief engineer Jamie Brewer. The team burned through $200-million worth of cycle time on GM’s computers to model every aspect of the Lyriq, she says. “By the time we got our first prototype vehicle built, we were 80 percent of the way there and could go right into tuning,” Brewer explains.

This was important, because as the first in the line of Cadillac’s all-electric models (the company says it will only introduce battery-powered new models from now on), the Lyriq serves to illustrate everything Cadillac aims to be going forward. So that means challenges like working out noise management, now that the combustion engine is no longer there providing background white noise to drown out other, more unpleasant sounds.

“The engine is a significant masking factor for annoying high-pitched noises and pumping noises,” says Brewer. Cadillac’s solution, which was heavily reliant on that CAE modeling, is to eliminate as much noise as possible at its source. As an example, the Lyriq rolls on wheels that have been specifically designed for maximum rigidity to help quell road noise, and they are wrapped in tires that are filled with self-sealing goo that also quiets noise at the source.

When that fails, the solution is to apply sound deadening to block the noise from getting to the driver. And the last line of defense is active noise cancellation through the car’s AKG stereo system, which directly attacks any remaining unwanted sound waves that enter the Lyriq’s cabin.

CAE also contributed to the Lyriq’s absence of a rear window wiper. The company modeled airflow to help keep the rear window clear as an alternative. Even the welds that hold the Lyriq’s sheet-metal chassis together were modeled on the computer. “We were able to use CAE to very quickly iterate different welding types and different materials to optimize the structure,” Brewer says.

Hop in the car, kids

These measures combine to provide the hushed, posh experience that Cadillac hopes will attract—finally—a new generation of customers. So far it is working. Seventy-eight percent of the people who’ve bought the 2023 model year of the Lyriq completely out are new to Cadillac. If you want a Lyriq now, it will be a 2024 model, delivered sometime next spring. Two-thirds of these customers are Generation X or Y rather than the geriatrics who’ve been Cadillac’s mainstay customers for decades.

To catch and keep more such buyers, the Lyriq needs to break Cadillac’s history of nearly-there efforts. These have been cars that Cadillac enthusiasts, if there were any, could accept as a reasonable facsimile of the BMW the cars were trying to be. But there were still shortcomings. Plastics that looked out of place. Wonky infotainment interfaces whose processors were inadequate for their task.

So, the stakes are high: As the bellwether for Cadillac’s new generation of electric models that will attract its new generations of customers, the Lyriq cannot afford to fumble these things. And mostly, it doesn’t.

The car is as placid to drive as you’d hope, sailing effortlessly down the road on the power of its 340-horsepower, 325-lb.-ft. rear drive motor. It is powered by a 102-kilowatt-hour lithium-ion Ultium battery pack that the EPA says will last 312 miles. This is the configuration for our $62,155 rear-drive test car.

Starting at the end of the year, the company will also ship all-wheel-drive models that add a front motor for a total of 500 hp. Torque values haven’t been determined yet.

As is the norm for such vehicles, the Lyriq has fake engine noise in the cabin that provides aural cues to the car’s power state. It also has multiple drive modes, so drivers can choose from Touring, Sport, Snow/Ice, and a personalized “My” mode. These settings tweak the power delivery, brake response, and fake sound levels.

The suspension is unchanged, as the initial Lyriq models will not employ the magnetoresistive active shock absorbers that Cadillac pioneered in the ‘90s under the Magneride brand. (That system employs hydraulic fluid containing iron particles whose alignment is controlled by a magnetic field to change the fluid’s viscosity and therefore the stiffness of the shock absorbers.) The Lyriq’s steering is well-weighted and provides decent feedback for a luxury car, but it is slow, requiring many turns on the wheel to negotiate the switchbacks of the roads through the mountains outside Park City, Utah, where I tested the car.

Slow steering is no particular shortcoming in a luxury car with no racetrack pretensions, and the Lyriq’s handling easily surpasses the disappointing understeer of the BMW iX electric crossover. In this instance, Cadillac is showing BMW the way.

The Lyriq has driver-selectable one-pedal drive. This is the feature in most EVs that causes the car to slow when the driver lifts off the accelerator pedal, the way a golf cart does. Most companies choose a corporate philosophy on how much or how little their EVs will slow when the driver lifts off the pedal. Cadillac wisely exploits the fact that this is a matter of software, and as such, should be driver-selectable.

So in the Lyriq, drivers can switch the function off, or they can choose low or high levels of deceleration. This means that just by lifting off the accelerator pedal, the Lyriq will slow at 0.23 g of force in the low setting or 0.30 g in the high setting. Additionally, the driver can squeeze a paddle on the back of the steering wheel that provides proportional braking that varies by how much they squeeze the paddle to produce 0.35 g of deceleration—all without ever touching the Lyriq’s brake pedal.

The brake force when the brake pedal is used is something that was developed entirely in-house by GM. Previously brake response was the province of the brake system supplier. But now that braking must be metered between regenerative braking from the car’s electric drivetrain and friction braking using the conventional brakes, GM has taken the responsibility of integrating these systems itself.

The car is spacious and comfortable inside, with a light, airy cabin that is illuminated through the standard panoramic skylight. The rear seat feels roomy, with abundant leg and headroom. But some of this is a trick, bought by using a too-low rear seat cushion that would leave adult passengers squirming uncomfortably before long.

As pleasant and capable as the Lyriq is, the car is undermined by some head-scratching decisions. The navigation system does not display the speed limit, which is valuable information in a tourist area with surprisingly low speed limits like Park City.

Those cool driver-selectable drive modes and one-pedal drive modes? Don’t look for a button to conveniently set these. Instead, you’ll navigate through a couple menu layers on the Lyriq’s infotainment display.

A Cadillac engineer acknowledged these oversights, and indicated that the one-pedal drive setting could get a dedicated virtual button at the bottom of the display screen soon. Speaking of the touch screen, steadying your hand by grasping the top as you press on-screen buttons reveals that the top of the display gets hot in the sun. Really hot.

So there are details that leave us puzzled and disappointed. They aren’t deal breakers, and many of them could be addressed with updates in the future. But when new customers are being introduced to the brand for the first time, they may not be in a mood to forgive such quirks. Cadillac just needs to unleash a tiny bit more of its engineers’ capabilities to iron out these fixable details, because they’ve done exemplary work on the Lyriq’s fundamentals.