The GL-5 active protection system uses shrapnel filled grenades to destroy missiles, rockets and artillery shells before they can hit the tank. It's one of the most high profile Chinese ground equipment to debut at NORINCO's Second Armor Day, a major expo for foreign buyers looking to get increasingly sophisticated Chinese tanks. NORINCO
SHARE 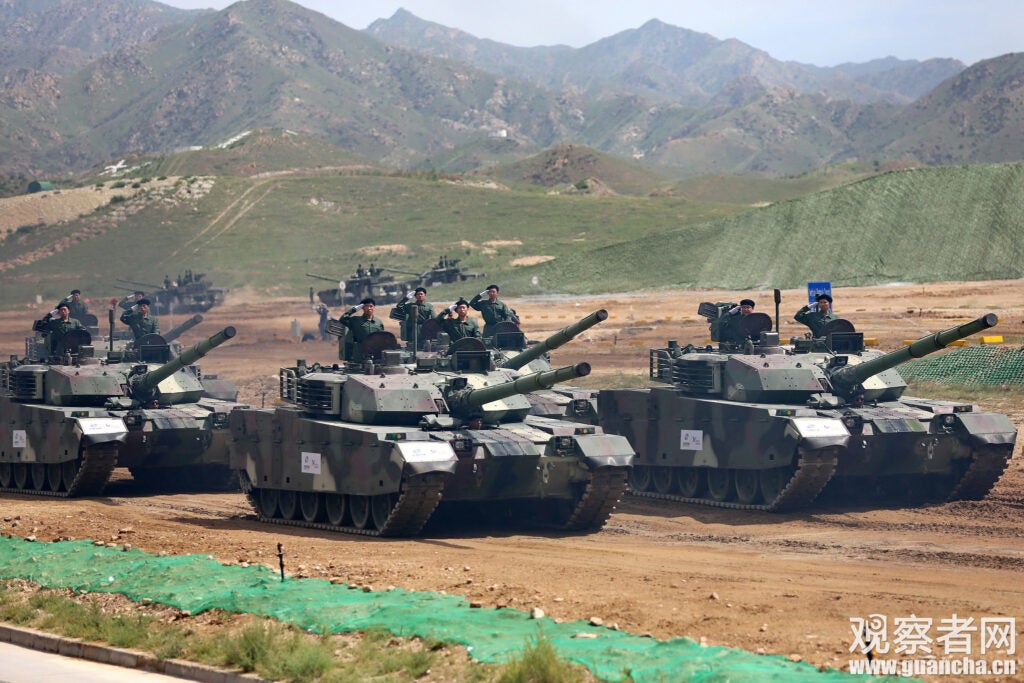 It’s not like every defense contractor in the world can boast of its own fleet of tanks. Here, a platoon of VT-4 main battle tanks leads the parade for Norinco’s annual 2nd Armor Day.

Last week, China’s dominant fighting vehicle manufacturer, China North Industries Corporation (Norinco), displayed a bevy of export armored vehicles as part of its Armor Day celebrations. These festivities, now in their second year, laud the power of Chinese military and offer an occasion to show off to senior foreign military officers, who were likely there as potential buyers. 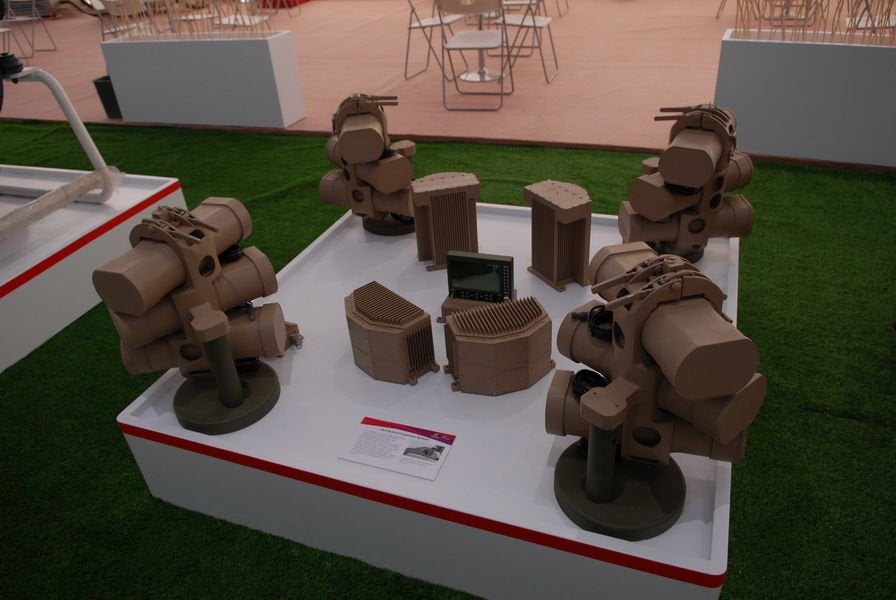 The star attraction was the GL-5 hard-kill active protection system (APS), which destroyed a guided missile attacking a tank in a live fire exercise. The GL-5 system consists of four radars and fixed projectile launchers, which are attached to a tank turret for 360 degree coverage (each launcher covers a quadrant).

The radars pick up incoming enemy rockets, missiles, and shells, causing the computer to select a munition and fire it. Each munition is capable of destroying incoming munitions at a range of 33-39 feet. The use of fixed-launcher, radar-guided munitions in an APS mirrors the hard-kill portion of the Afghanit APS on the Russian T-14 Armata tank. As the GL-5 is an export-only version, the Chinese military is likely to field a more advanced version to protect its tanks, which could be comparable to the U.S. Quick Kill and Israeli Iron Fist and Trophy systems in terms of coverage, range, and fire volume. 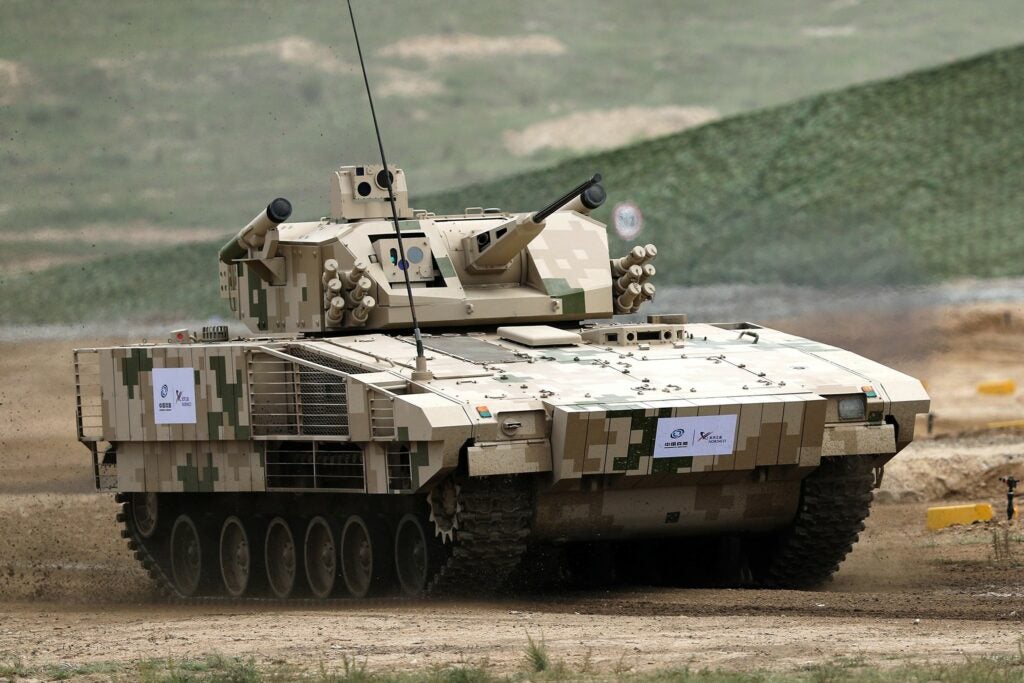 The VN-17 is China’s latest export infantry-fighting vehicle. It weighs about 30 tons, with heavy all-around armor, a 35mm autocannon, and twin HJ-12 anti-tank guided missiles. It also boasts next-generation imaging sensors for the commander and gunner—as well as room for seven passengers.

The new VN-17 infantry-fighting vehicle (IFV) uses a heavily modified version of the 33-ton VT-5 light tank’s chassis. It has an unmanned (read: remotely controlled) turret with two large, multi-lens electro-optical and infrared sensors (one each for the gunner and commander). Those sensors come in handy when the system needs to use its 35mm cannon, 7.62mm machine gun, or medium-range HJ-12 anti-tank missiles. The VN-17 is also well protected, with reactive armor on the lower front hull, and significant side-skirt armor alongside its tracks. All this, plus its capacity to carry seven infantry, makes it likely in the 30-35 ton weight class.

It shares some similarity with the People’s Liberation Army’s mysterious new infantry-fighting vehicle, which will reportedly have an unmanned turret, augmented displays for crew helmets, and a hybrid-electrical engine for fuel efficiency and stealth. In terms of armament, protection, and sensors, both the VN-17 and the unnamed PLA IFV compare quite favorably to the U.S. Army’s M2A3 Bradley IFV. But unlike the 35-year-old Bradley, China’s brand new battle taxis have plenty of margin to grow into future upgrades like more advanced armor, better weapons, APS, sensors, and deploying unmanned partners. 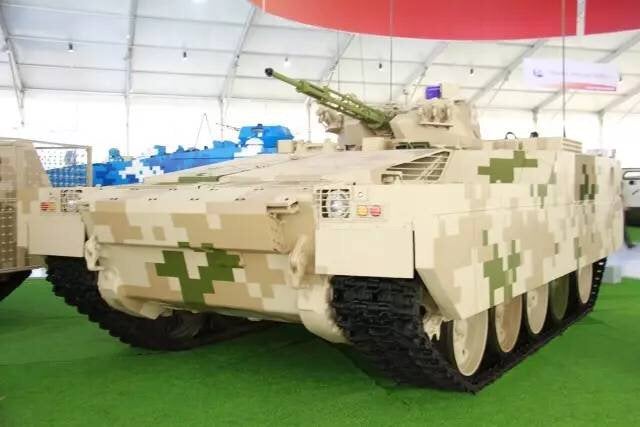 The ZTZ-59 tank, a 60-year workhorse copied off the Soviet T-54 tank, got a new lease of life in the form of a heavy IFV (or HIFV). The HIFV mod weighs about 40 tons and can carry up to seven passengers. So what new tricks has the old dog learned? Modifications include moving the engine to the front of the vehicle chassis, increasing tank armor on all sides, and installing a rear door for dismounting infantry.

Its 105mm cannon and the entire turret have been replaced with a much smaller turret consisting of a 30mm autocannon, a searchlight, and electro-optical sensors. The HIFV’s bulky, all-aspect armor would make it well suited for either urban combat or high-end warfare in open environments. Likely customers could be existing T-54/T-55 buyers in the Middle East, particularly those looking for armored vehicles to fight insurgents in urban environments. Its likely that Norinco could develop HIFV versions of heavier, modern tanks like the VT-2 and VT-4 to offer more high-end mechanized infantry solutions for future customers, including the People’s Liberation Army. 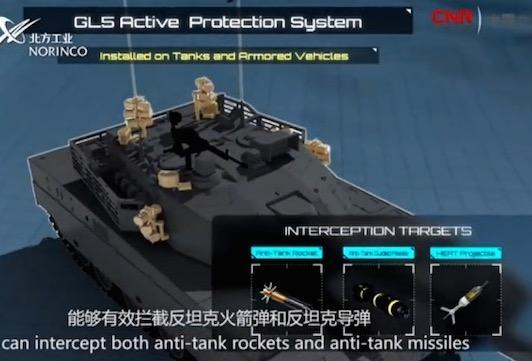 The GL-5, installed on the VT-4 export main battle tank, provides 360-degree protection by installing four munitions launchers on each quadrant of the turret, along with accompanying radars.

These competitive NORINCO offerings add credence to the U.S. Defense Department’s 2016 report on the Chinese military, which stated that Chinese military industry was offering “world-class” ground systems. Notably, the increase in quality of Chinese weapons also means a corresponding increase in price; the RTA purchased 10 VT-4 main battle tanks for $58 million in 2017.

While Norinco’s Armor Day showcased impressive fighting vehicles aimed at the export market, the PLA will likely take delivery of even more advanced versions in the years to come.