The most exciting electric motorcycles of 2019 The Cake Kalk uses Öhlins suspension and has 31 pound-feet of torque. It also has three riding modes that provide between roughly one and two hours of riding time. Cake
SHARE

This article was originally published on Motorcyclist

I’m not sure when we’re going to stop referring to electric motorcycles as the future of motorcycling because it seems to me that 2019’s crop of electric bikes suggests we’re already there.

I’ll be the first to admit that I love internal combustion. I’m all for electric bikes as an alternative, but the thought that one day that’s all we’ll have to ride really bums me out. I mean, will a Yamaha electric powertrain feel any different than a Ducati’s or a Harley’s? If not, what the heck will I even write about? Or daydream about, for that matter?

But when I look at the variety of electric bikes that are (or will very shortly be) available in 2019, there are some things worth getting excited about. I may not ever be ready to put down the gas pump, but there’s some serious right-thinking happening in the electric space right now.

From implementing new materials and new technologies‚ like AI and 3-D printing, to pursuing the electric path for the sake of speed and torque, electric bikes give designers the ideal platform to rethink what makes a motorcycle. No wonder some of the most exciting bikes in 2019 are from new names looking to etch their names in motorcycling history.

Here are our picks for 2019’s most exciting electric motorcycles. 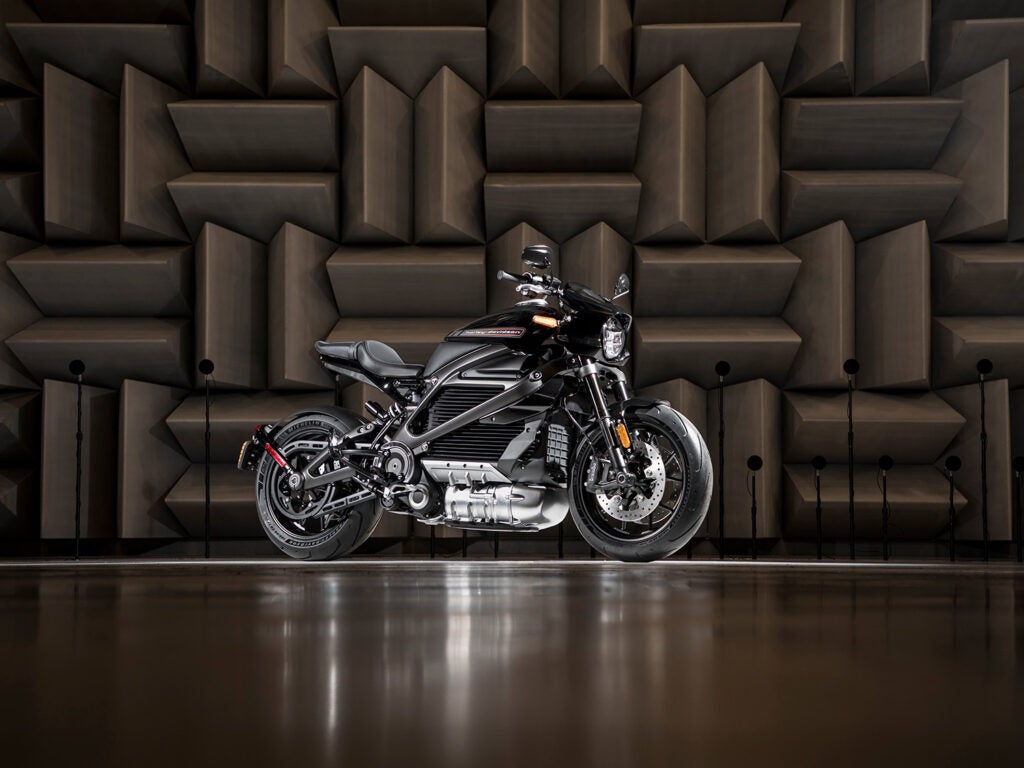 The American Vision Of The Future: H-D LiveWire

The much discussed Harley-Davidson LiveWire.

The LiveWire is Harley-Davidson’s $30,000 answer to the electric question. It’s the first of Milwaukee’s comprehensive electric plan. We hope they’re great. After all, if H-D left Alta high and dry for nothing, we’d be bummed (because Alta made some killer bikes). Although H-D’s market-share is dwindling, don’t believe it’s about to abandon 115 years of 45-degree pushrod glory for batteries and copper wire. 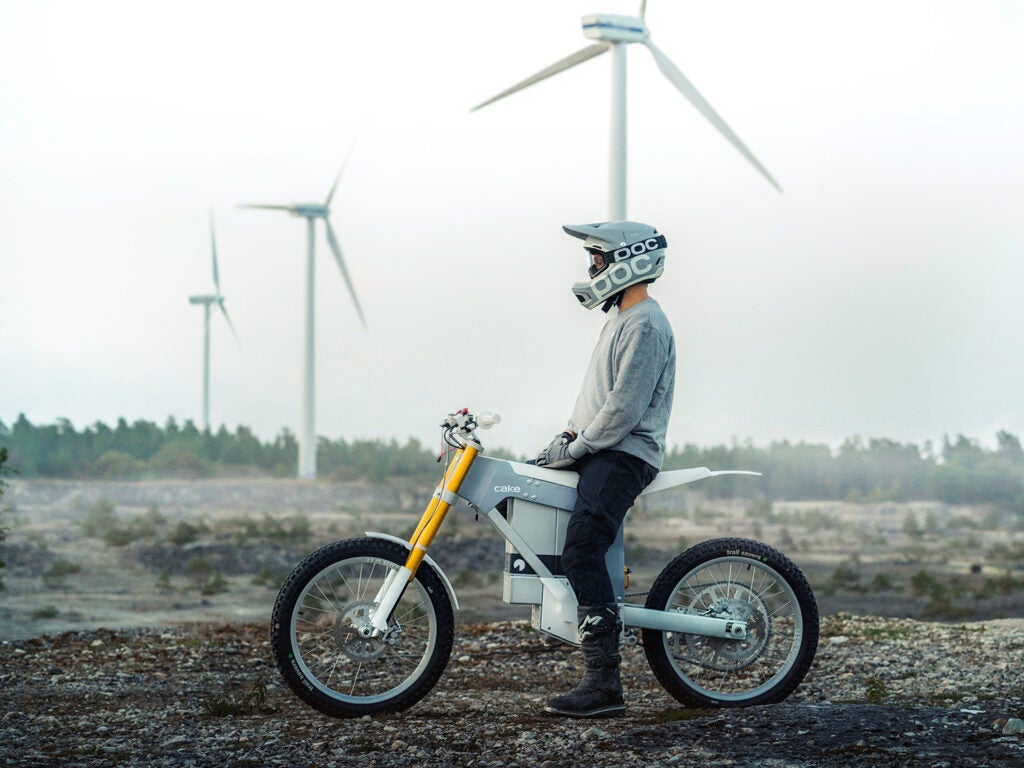 The Cake Kalk uses Öhlins suspension and has 31 pound-feet of torque. It also has three riding modes that provide between roughly one and two hours of riding time.

Sure, $13,000 is a lot for an off-road-only toy, but the Swedish bike has a lot to offer in its 152-pound package. Think of it as a gateway drug. Because it straddles the bicycle and motorcycle worlds, it seems like just the thing to convert the unwashed masses to two-wheeled motorized fun. And with typical Swedish minimalism, it conveys just how much it isn’t your dad’s gas-guzzling, needs-regular-maintenance machine. The Kalk’s price tag makes it more blogosphere darling than legitimate contender, but as a model of things to come, it’s intriguing. Cake also unveiled a street-legal version at the Outdoor Retailer Snow Show in Denver. 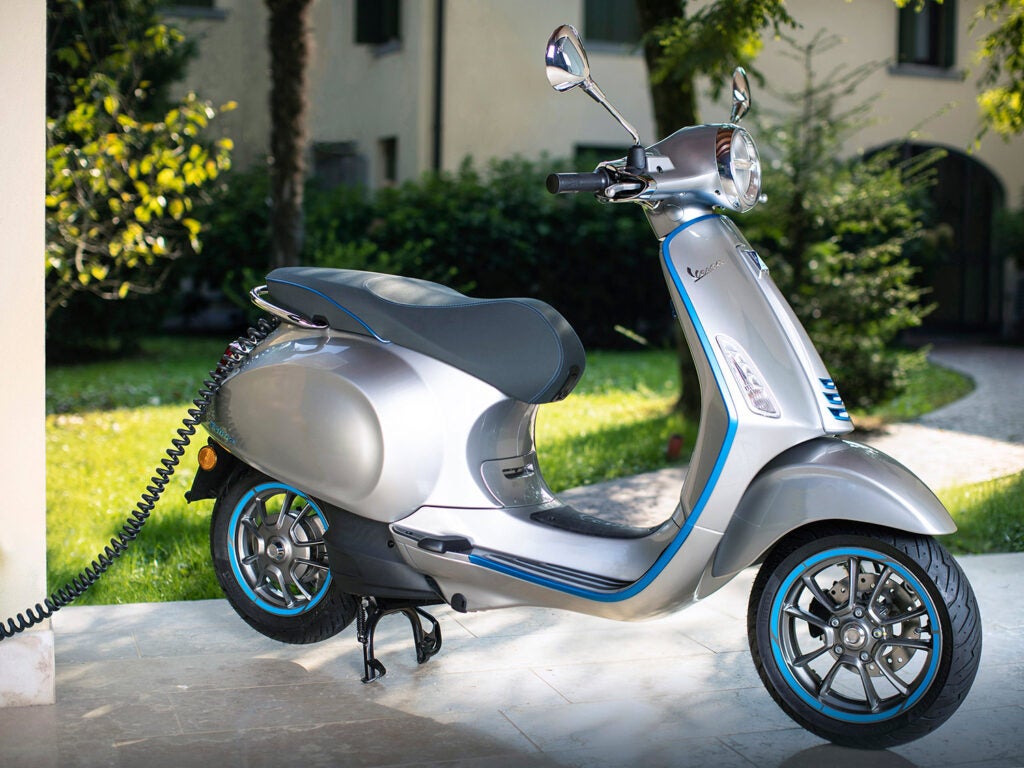 For urban mobility, electric powertrains make a lot of sense. Throw one in a scooter and there’s a chance the city soundscape will be forever changed.

While Cake, Tarform, and other e-bike builders are distinguishing their machines from archetypal motorcycle forms, Vespa is going the opposite direction. The Elettrica scooter has the same charm and casualness that made the world fall in love with the original gas-powered style/motoring icon. Scooters are convenient. Makes perfect sense to put an electric motor in one if you ask us. 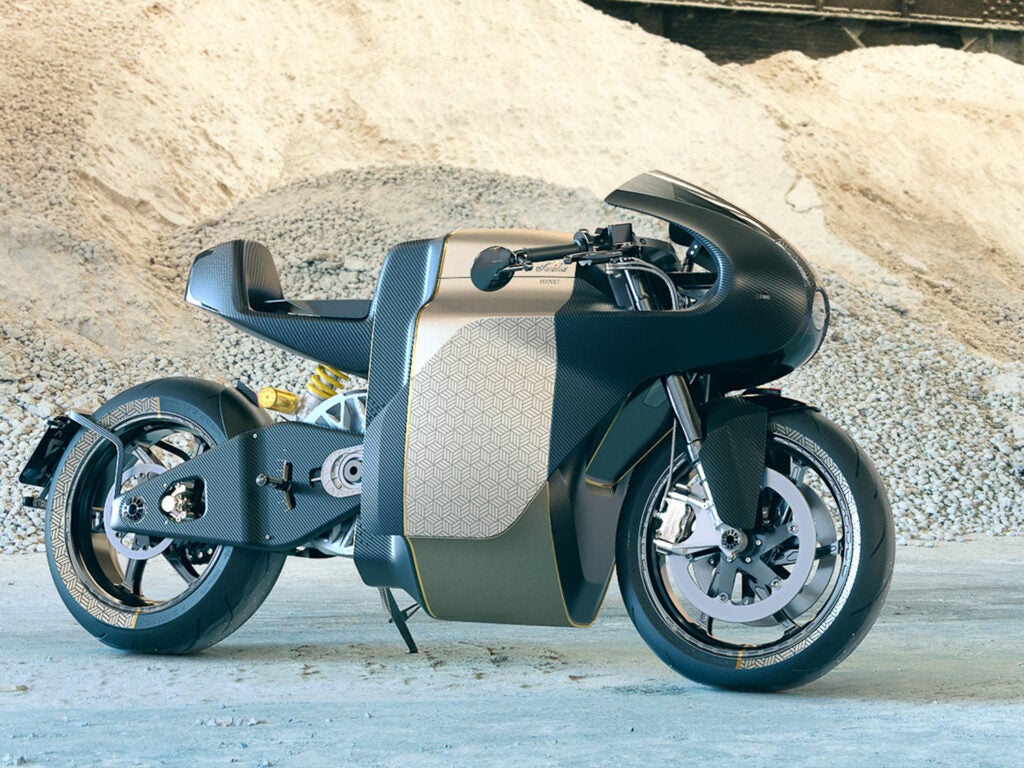 Appropriating the Manx name is a cheap shot to appeal to the emotions of motorcyclists. This is my favorite bike on the list, but I’d still prefer a Norton Manx. What about you?

The Saroléa name is one of the oldest in motorcycling. In 2010, twin brothers Torsten and Bjorn Robbens revived the Belgian marque and have been making electric racing motorcycles ever since. The Manx7 is based on the SP7 which Dean Harrison campaigned in the 2017 TT Zero race, finishing in a respectable fourth place. The Manx7 features a carbon-fiber monocoque chassis and swingarm and other high-end components. It produces 163 hp, 332 pound-feet of torque, and has a 205-mile range. Saroléa is building only 49 examples, so act fast. 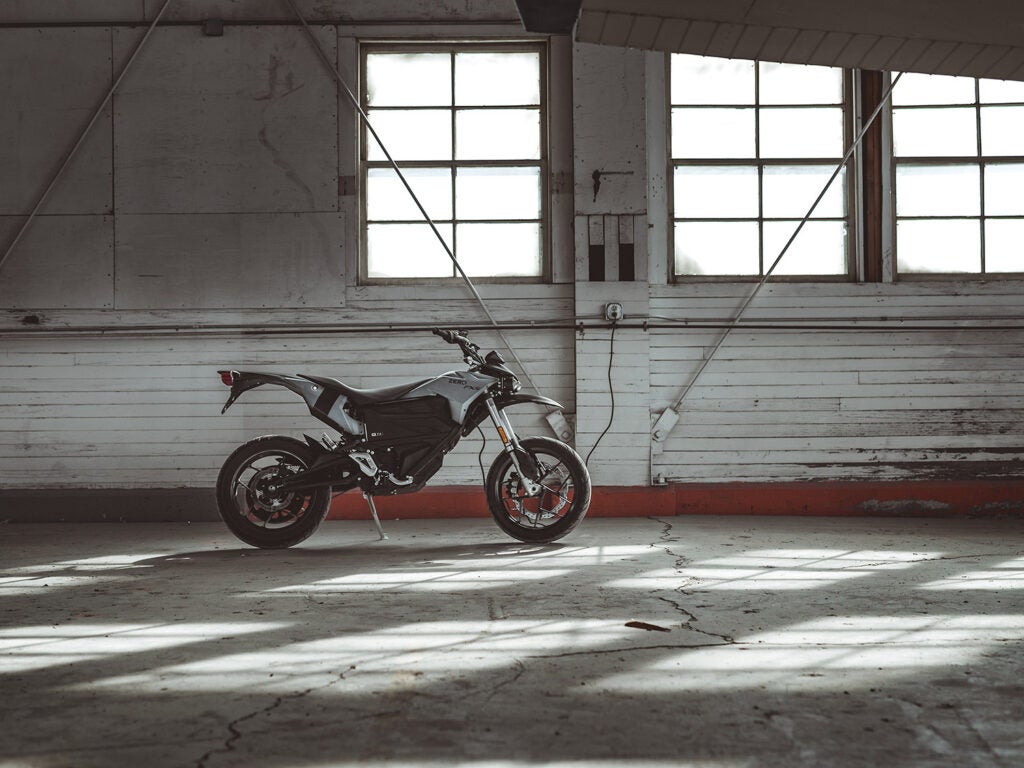 Like other Zeros, the FXS is available with multiple battery capacities.

While many of the bikes here represent what’s possible with electric motorcycles, the Zero FXS represents what’s financially attainable. Zero’s FXS supermoto starts at $8,495. With baked-in modularity, riders can tailor the machine to their needs and pocketbooks. You’ve got to hand it to Zero for having its feet on solid ground. In a space where designers and builders can get carried away with the hypothetical and the idealistic, Zero’s been churning out competent, affordable motorcycles at its home in California for the past decade. 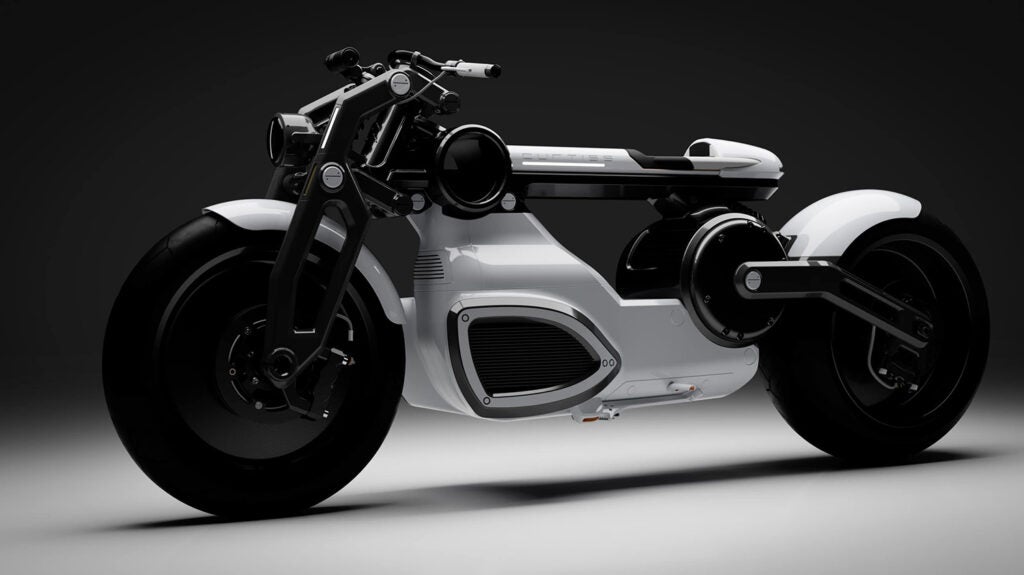 Curtiss lives. Glenn Curtiss was one of the most innovative men in motoring and aviation history. Do you like seeing his name on a new machine?

In case you missed it, Confederate Motorcycles ditched its connotative name, revived the famous Curtiss moniker, and prioritized building new high-end electric bikes. As with machines built under the Confederate banner, the new Curtiss machines stand out for their thought-provoking aesthetics and robust motors. While the ICE-powered Confederates emphasize the mechanical members of the machine, the Curtiss de-emphasizes the same, for a design that takes as many cues from McIntosh audio components and utopian futurism as it does from conventional motorcycle design. The Zeus, Curtiss’s first e-offering, is available as a bobber or as a café “not-racer,” and has a claimed 190 hp and 145 pound-feet of torque. 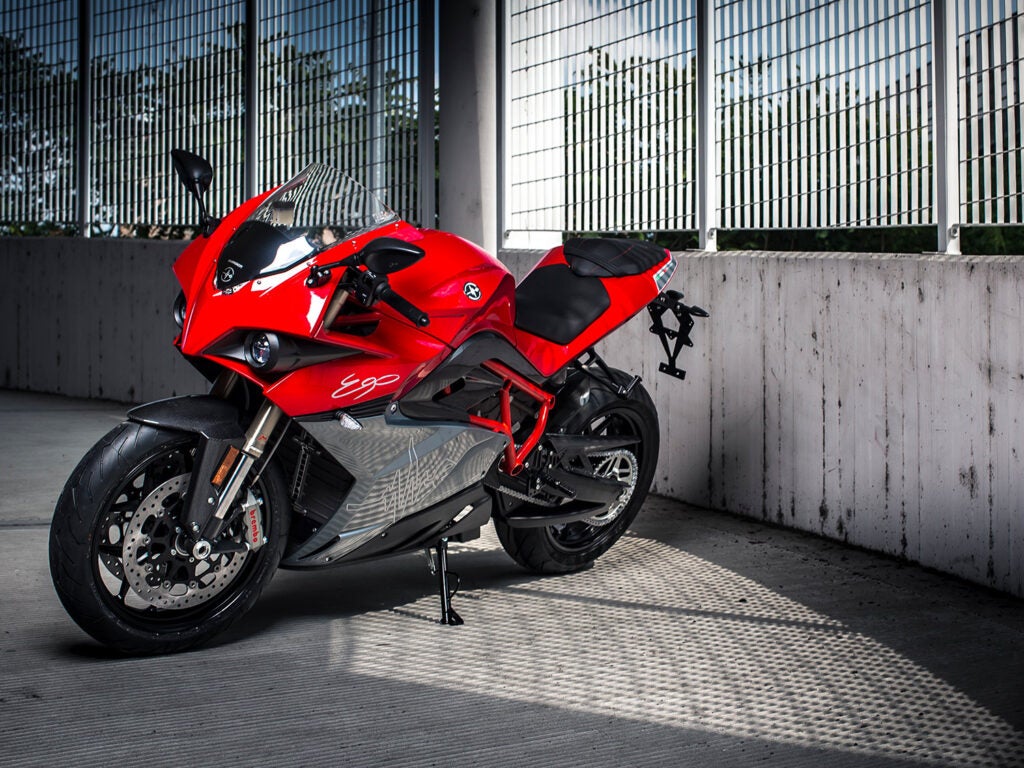 The Energica Ego. Coming to a MotoGP circuit (in Corse form) near you—if you live in Europe.

2019 is a big year for electric bikes. The FIM is sanctioning the first all-electric world championship series: MotoE. The sole manufacturer is the Italian firm Energica and teams will campaign bikes derived from the Ego sportbike, a machine that produces 145 hp and 144 pound-feet of torque in standard trim. Should be fun. The series will be cooler when it’s open to other manufacturers, but it’s a great place to start. And the rider lineup has some real talent. Ex-Rossi rival Sete Gibernau is even lining up on the grid to add some real star power. It makes the Energica Ego an enticing prospect. 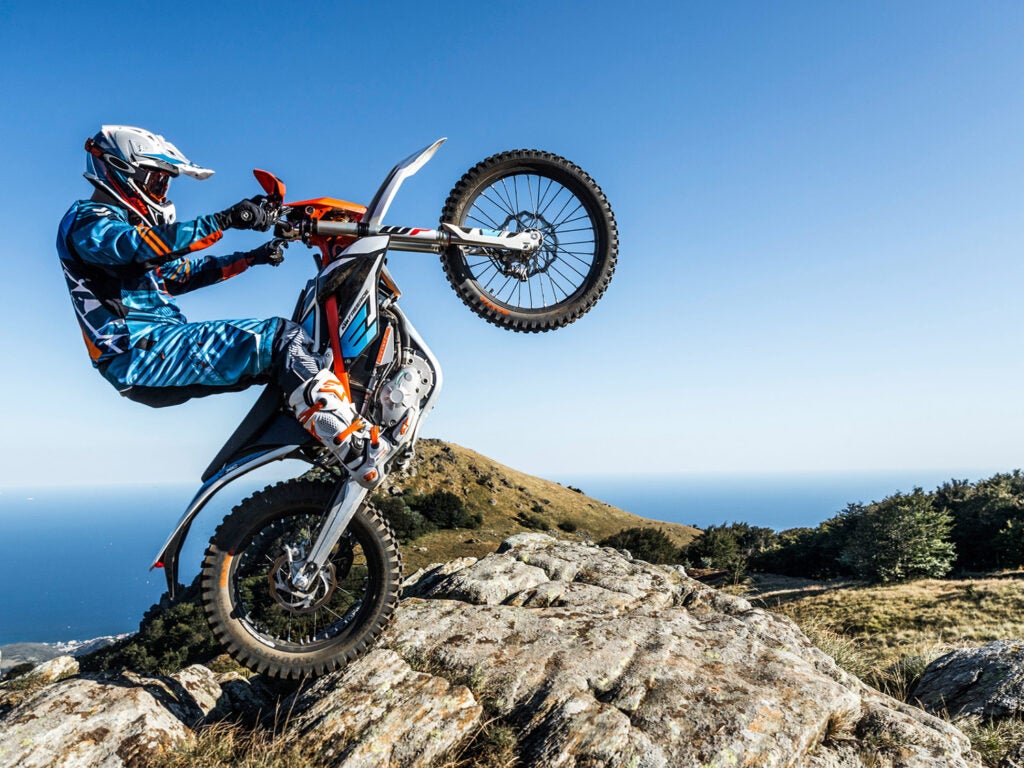 An electric KTM. Doing what KTMs do.

KTM’s ICE-powered Freeride was always a tempting and beautiful machine (that cast aluminum subframe!), and the electric version promises to be pretty awesome too. KTM is smart to make its first electric bike in a form-factor that’s all about fun. Somewhere between an enduro bike and a trials bike, the Freeride makes pulling wheelies, bouncing off rocks, and other feats of tomfoolery seem irresistible. 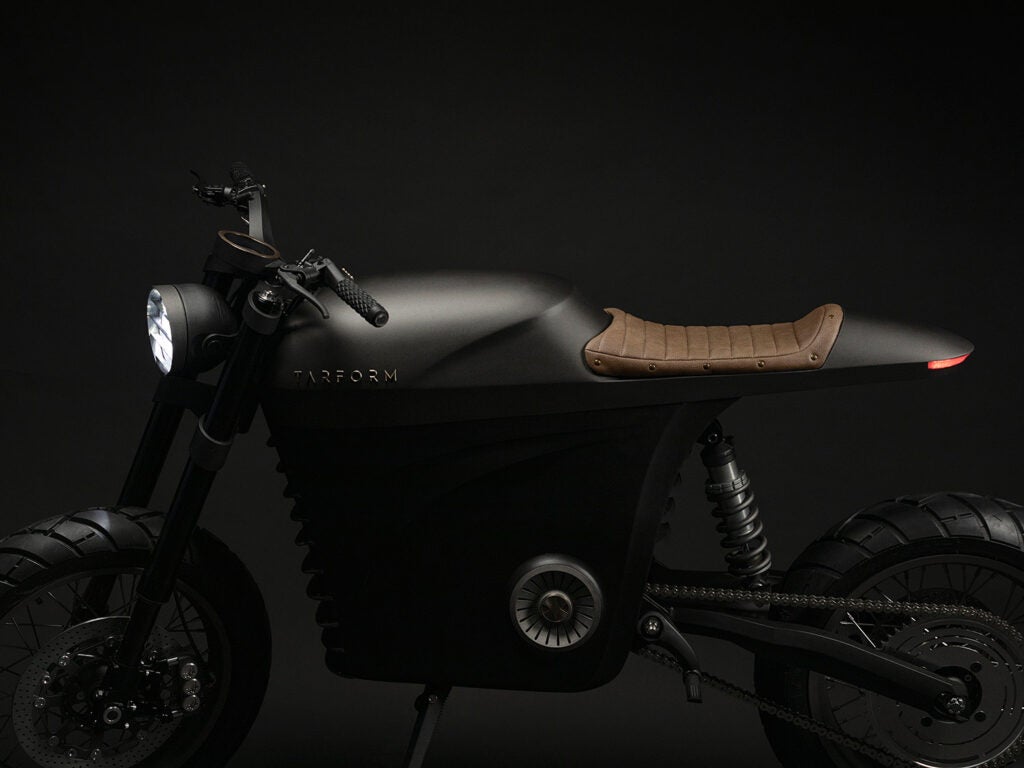 Tarform says to expect a 110-mile range out of its machine. A company representative did not provide horsepower, torque, or weight specs.

Manufactured in Brooklyn and designed in Stockholm, Tarform is currently taking preorders for its first motorcycle: a machine that marries cutting-edge tech like artificial intelligence with small-batch craftsmanship. Tarform’s commitment to sustainability means it’s using 3-D printing and biomaterials to build its bikes. Eco-trendiness has made “sustainability” a bit of an eye-rolly word these days, but if it’s the impetus for developing a unique vision of motorcycling, so be it. The Collector Edition machine will cost $30,000; no word yet on pricing for production-run machines. 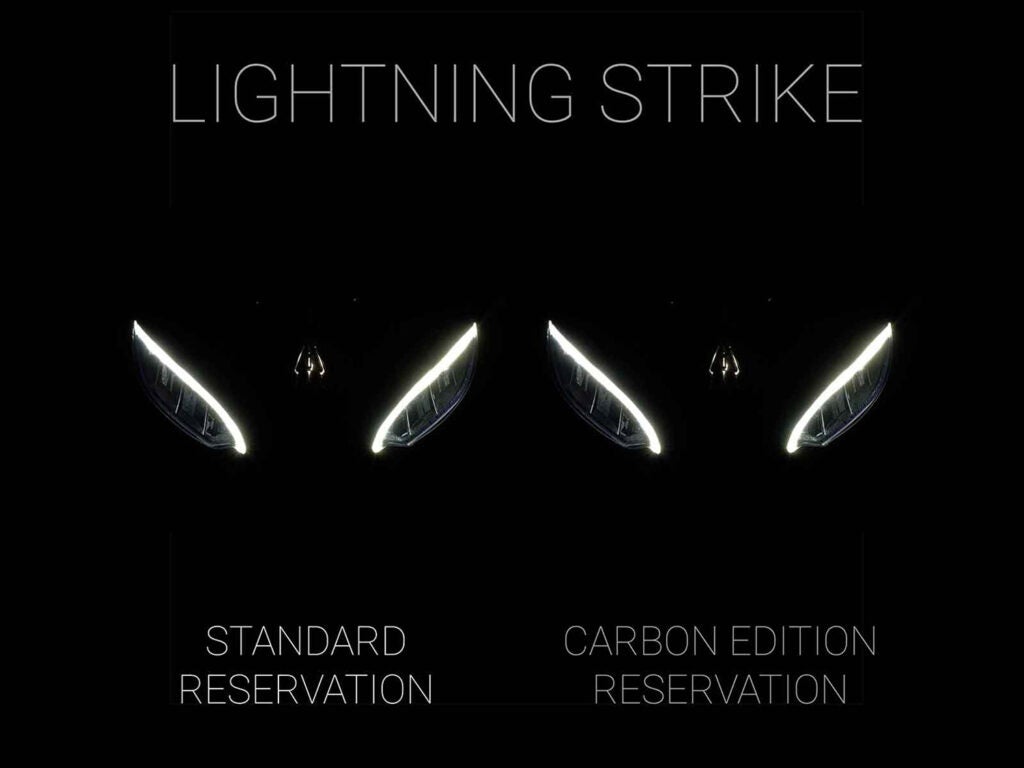 Lightning is best known for its LS-218 sportbike, the 200-hp beast that made performance lovers take notice when it was introduced in 2014. Starting at just under $40,000, the LS-218 is as premium as premium gets. For 2019, Lightning is unveiling the Strike, a $13,000 machine capable of reaching 150 mph and with a 150-mile range. The Strike also boasts a 35-minute DC charge time. At the moment, that’s all we know. Sounds promising though.

What’s the most intriguing bike to you? Anything tempt you to trade in your ICE bike?