Honda brings high-tech efficiency down to Earth—and back to the U.S. 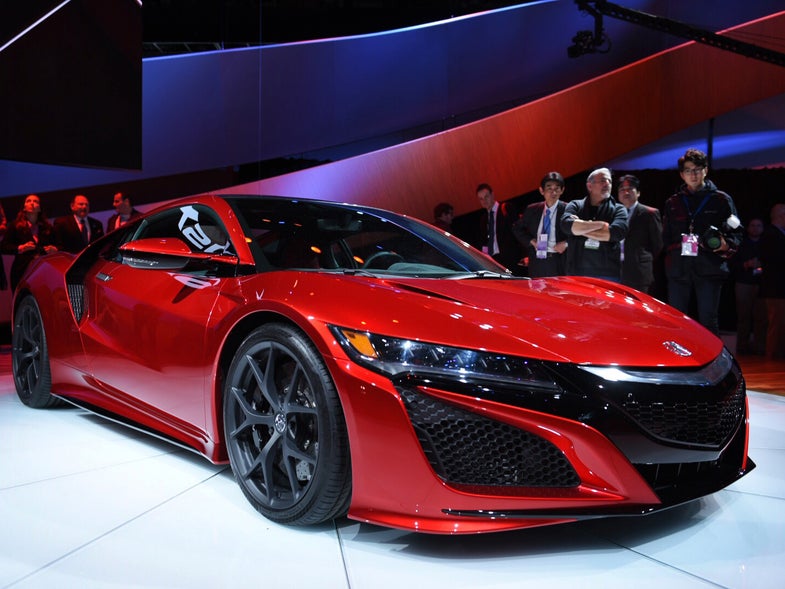 Honda’s Acura division finally unveiled the long-awaited production version of its new NSX supercar this afternoon in Detroit. The sleek hybrid machine—designed and to be built in the United States—is easily the most significant reveal thus far at the North American International Auto Show.

The wait certainly seems worthwhile: The car is a beauty, and for the most part faithful to the NSX heritage that enthusiasts crave. (The original NSX, which is renowned for its mid-engine balance and crisp cornering, came out in 1990 and lasted until 2005.) The new model’s twin-turbocharged V6 engine will produce over 500 horsepower, and it packs a nine-speed dual-clutch transmission for instantaneous response and improved fuel efficiency. The car also has a three-motor hybrid system to generate stability, control, and power distribution that’s currently available only in the trio of $1-million-plus hybrid supercars from McLaren, Porsche, and Ferrari. (Acura estimates the car will cost about $150,000.)

Acura’s Michelle Christensen gave the car its dramatic design, which is edgy and complex yet absent of unnecessary flourishes. The low, wide stance is driven by performance and aerodynamic advantage, with shaping that directs airflow through the front of the car to cool the electric motors and the brakes. The air emerges from side vents, and then back into the rear to cool the V6 engine. It’s hard to draw direct lines to NSX’s predecessor by looking at the car, but philosophically the link is there, from the general mid-engine configuration to the smart, efficient V6, plus the car’s finely tuned balance.

Acura told a crowd today that its NSX designers and engineers were intently focused on the driver experience. “The emotional connection with the driver is intense, immediate, and personal,” says Mike Accavitti, a senior vice president at Acura. “Every part of the vehicle is respectful of the smartest part of the system—the driver.”

It’s difficult to quantify an emotional connection to a car, but we know when it’s there (we’ll report back once we drive the car later this year). As for being respectful to the driver, Accavitti was referring to everything from ergonomic, unobtrusive driver interfaces to the designers’ efforts to enhance feel, visibility, and intuitive control.

But the big story here is the hybrid motor integration. Two electric motors drive the front wheels, while the gasoline engine has its own embedded electric motor to power the rear wheels. The result is an all-wheel-drive system allows for precision-directed power distribution and, of course, improved fuel efficiency (we’ll note, however, that Honda has yet to disclose fuel economy or battery capacity numbers). The NSX will also come with a launch-control function for “zero delay” acceleration and four drive modes: “quiet” (all-electric), “sport,” “sport+,” and “track.”

Honda should begin accepting orders in the summer, and then commence production in the fall from a new high-tech assembly line in Marysville, Ohio. 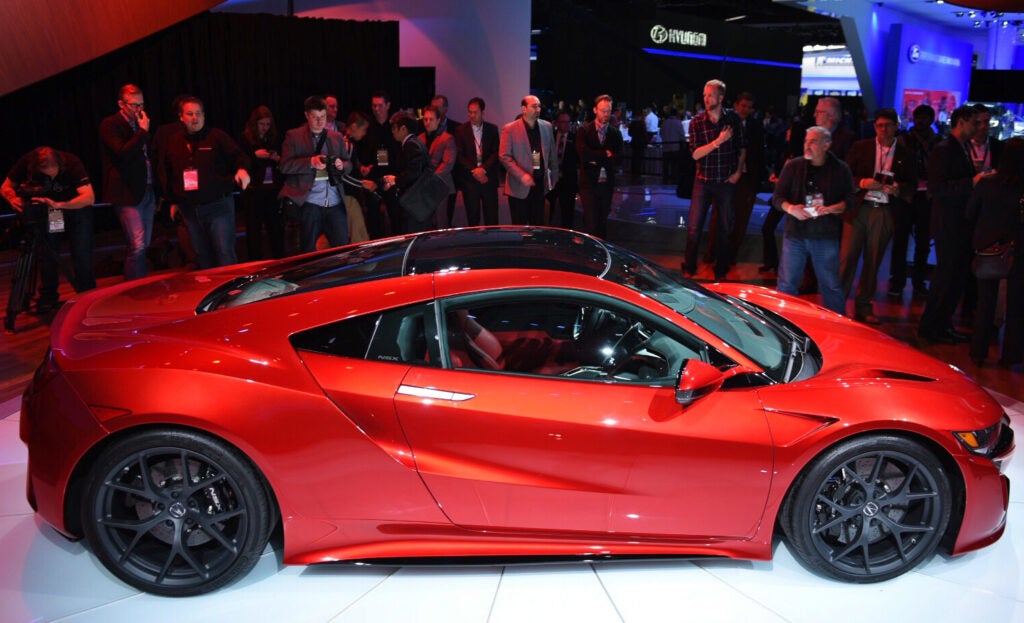 A side view of Acura’s newest supercar.