Suddenly, hydrogen fuel-cell cars are back in the news. Headlines have proclaimed a coming battle between plug-in electric cars and... 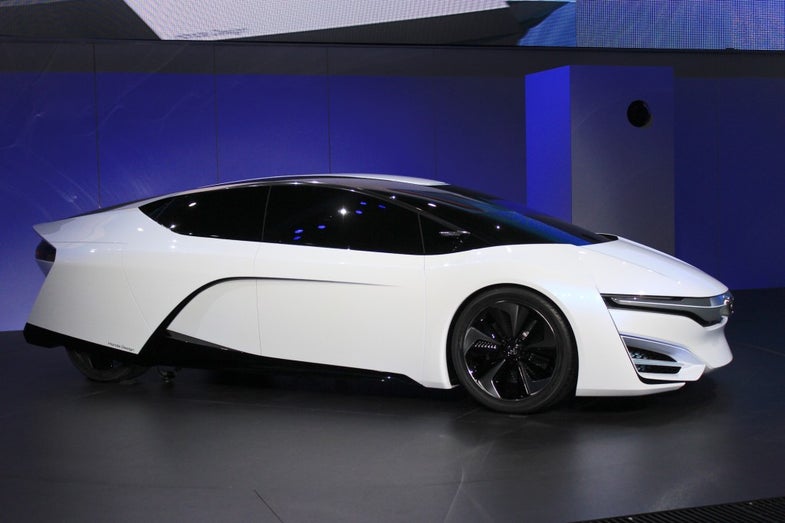 Suddenly, hydrogen fuel-cell cars are back in the news. Headlines have proclaimed a coming battle between plug-in electric cars and the new shining hope, hydrogen-powered vehicles.

Three automakers–Honda, Hyundai, and Toyota–will offer fuel-cell cars to consumers by the end of 2015, albeit in small numbers and limited areas. Today, the only such car is the Honda FCX Clarity, and Honda has leased only 40 of them since 2008, solely in Southern California.

Most automakers are pursuing both hydrogen and plug-in electric cars, to a greater or lesser extent, but clearly a few have chosen sides.

BMW, General Motors, Nissan, and Tesla believe most strongly in battery-electric cars powered off the grid, though the first two are hedging their bets to some extent with a variety of range extenders and gasoline-engine assistance.

Honda and Toyota, on the other hand, clearly still believe in hydrogen as the primary zero-emission fuel of the future. Each has said repeatedly that battery-electric cars are suitable only for the smallest vehicles, used over short distances only in crowded urban environments.

Somewhere in the middle are two of the members of the Daimler-Ford-Nissan-Renault fuel-cell partnership.

GM and Honda have a similar partnership; so do Toyota and BMW.

Then there’s Hyundai-Kia, which is going it alone. The company is launching both the 2015 Hyundai Tucson Fuel Cell crossover and the 2015 Kia Soul EV battery-electric compact hatchback. 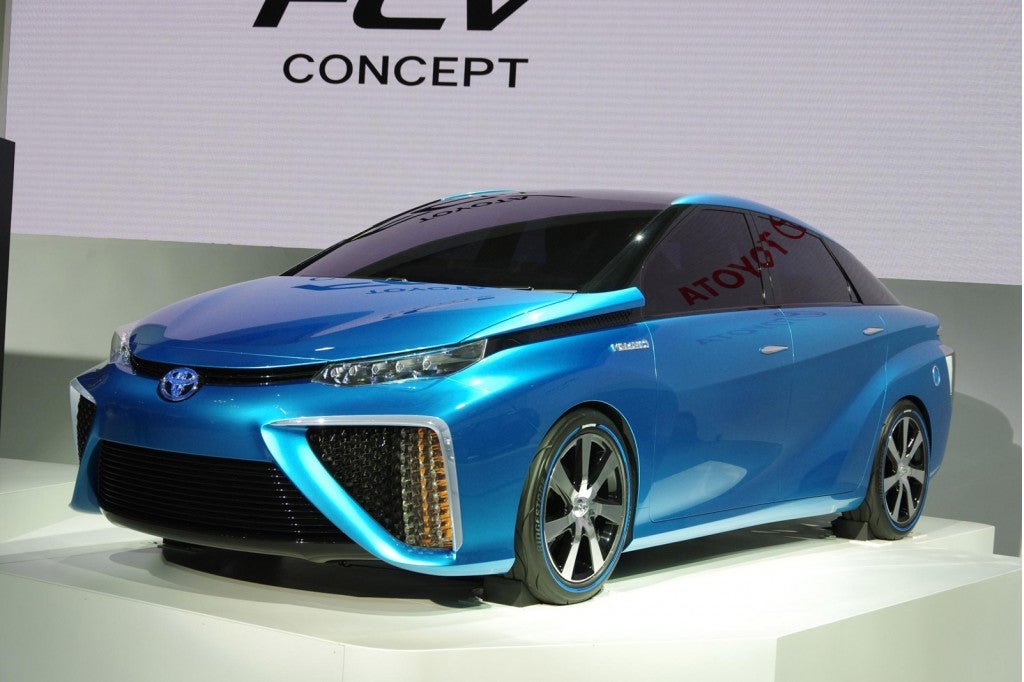 Numbers nowhere near the same

But by the time the keys to the first hydrogen Hyundai are handed over sometime next spring, there are likely to be about 200,000 plug-in electric cars on U.S. roads–and perhaps double that number globally. Meanwhile, Hyundai plans about 500 Tucson Fuel Cells a year, and Toyota has said that it envisions a market for “thousands” of its own hydrogen vehicles by 2020.

By 2020, it’s possible that 1 million plug-in cars a year will be coming off the world’s assembly lines, or two orders of magnitude more.

Then there’s the 800-pound gorilla in the room: infrastructure.

During our Tucson Fuel Cell drive last Saturday, we asked two top Hyundai executives this question: “What’s the long-term business model for providing hydrogen as a fuel once state support winds down, and who will be those providers?”

Hydrogen is hardly alone in having infrastructure challenges. It remains very unclear if public electric-car charging has a business model, especially for the 240-Volt Level 2 charging that takes 3 to 6 hours to recharge most plug-in cars fully.

But electricity is all over the U.S., and it’s far cheaper to wire that last 50 feet than it is spend $1 million-plus to construct a hydrogen fueling station. And that’s assuming a municipality has a zoning code under which hydrogen stations are covered; many don’t, meaning zoning has to be altered before a station can be permitted.

Further, unlike natural gas–which now reaches about half of all U.S. homes–there’s no existing hydrogen supply base beyond limited industrial use.

There’s an outside possibility that home refueling of natural-gas vehicles could become practical if large appliance makers–think GE or Westinghouse or Amana–can produce and sell a natural-gas fueling compressor in volume for $1,000 or less.

That’s still down the road, but North America has lots of natural gas, and the price is historically very low. Many policymakers are willing to reduce emissions in the short and medium term rather than wait for universal zero-emission vehicles.

Finally, if the goal is not only to eliminate vehicle emissions but to reduce the energy footprint (or carbon emissions) of covering miles in a vehicle, it remains to be debated whether and how much hydrogen helps.

Hyundai points to a study from the University of California-Irvine that suggests that carbon footprint is equivalent to that of a battery-electric vehicle on a wells-to-wheels basis. Other studies have disagreed with that position.

We’ll have more on that topic later. 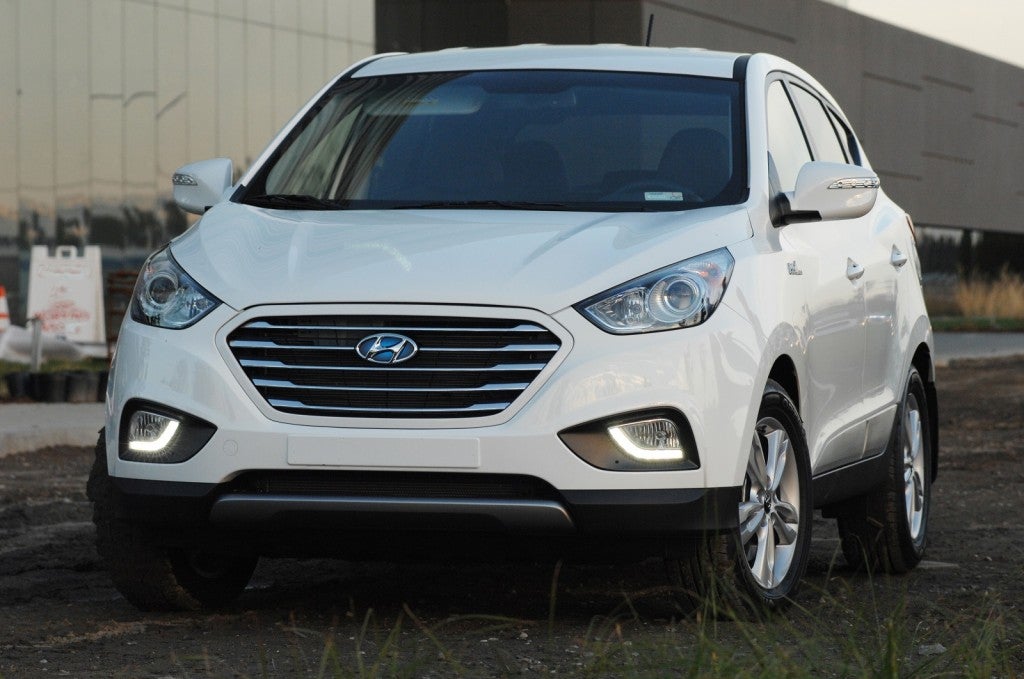 But for the moment, this much is clear: Global automakers will start to build and offer very acceptable hydrogen-fueled vehicles, in numbers from dozens to thousands a year, between now and 2020.

Those vehicles will only be usable in areas where a sustained effort to cover the region with hydrogen fueling stations is already underway. Today, in the U.S., that means Southern California and nowhere else.

Meanwhile, U.S. plug-in car sales are likely to come in around 90,000 this year–of which more than 15,000 will be Tesla Model S electric luxury sedans with more than 200 miles of range.

We expect there to be multiple fuels in the decades going forward; the hegemony of gasoline and diesel will slowly erode as more ethanol, more natural gas, and probably a lot more electricity makes its way from the grid into more vehicles.

Will hydrogen have a place in the mix?

Perhaps not surprisingly, electric-car advocate Chelsea Sexton, to whom we often turn for perspective, thinks not.

But in responding to our question, she raised an interesting point.

“There’s never been a pent-up market for hydrogen vehicles,” Sexton said, “even a small one.”

And that contrasts with the thousands of drivers who’d already experienced electric cars in one form or another by the time the first Nissan Leaf and first Chevy Volt were sold in December 2010.

“I don’t see either the market or the infrastructure materializing” in any way that will put meaningful numbers of hydrogen fuel-cell vehicles on the road over the next decade, she said.

And she suggested that a double standard exists: “The same carmakers who claim that no market exists for electric vehicles” still expect “to have to build one for hydrogen vehicles.”

In other words: What’s the constituency for a hydrogen-powered vehicle? Who’s the market?

None of these are simple questions, and the answers promise to be a complex mix of consumer desires, government policy, energy politics, and automaker jockeying.

Which is why we think it’ll be hellacious fun to cover over the next decade.

This article, written by John Voelcker, was originally published on Green Car Reports, a publishing partner of Popular Science. Follow GreenCarReports on Facebook, Twitter, and Google+.