The coolest concept cars from the 2018 Paris Motor Show 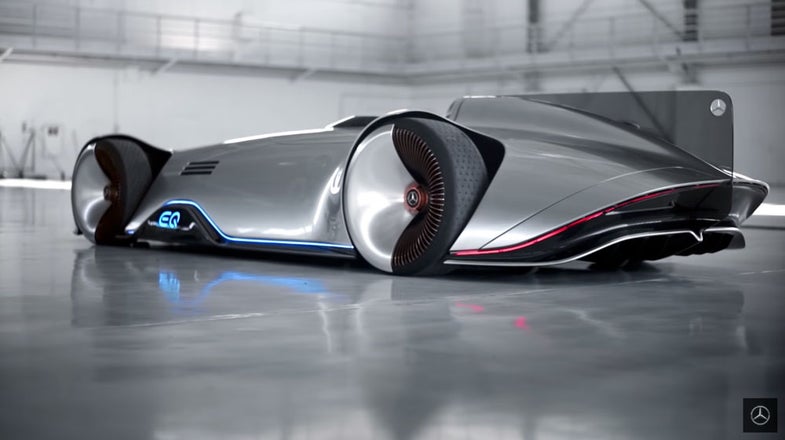 The 2018 Paris Motor Show is a chance for automakers to show off recent models, but it’s also an opportunity to debut outlandish concept cars that could eventually hit the roads. Here’s a look at some of the most innovative rides to show up in France.

This electric muscle car (pictured above) stole the show, acting as a design showcase for the future of Peugeot (which, may or may not be coming back to the US someday) and also showing what a future fully autonomous car could look like on the inside. A throwback to the long-running Peugeot 504 coupe, the exterior design is breathtaking — while the interior is crazy enough to remind you that the E-Legend is a concept and won’t be hitting showrooms tomorrow. “Wood-look” panels, a massive 49-inch curved screen and a small, retractable (for autonomous driving) steering wheel mix and match the past and future.

Technically this premiered in August at Pebble Beach, but this was the Silver Arrow‘s first appearance at an autoshow. More a “show car” than something that Merc actually plans to build, it’s a modern take on the W 125 grand prix championship car from 1937. A lot of current electric cars (Tesla sort of excluded) like the Nissan Leaf and the Chevy Bolt are rather boring. With a single center seat, sensual lines, and an outrageous wooden interior, Mercedes has built a stunning EV that is anything but.

Mercedes’ Smart brand just turned 20, and to celebrate, Smart showed off the ForEase. It’s a concept that plays off the brand’s iconic ForTwo, but strips off the roof and makes it way more… playful. It looks like something out of the movie Cars — a kind of squished sports car, with alluring lines and roll-cage humps behind the occupants, but with the cartoonish proportions Smart is famous for. We actually like it a lot, though we can’t really explain why. Maybe because it shows the normally staid Germans at Daimler can be a bit playful when they want to be.

Renault calls the EZ Ultimo a “mobile lounge” and says it could be what ride hailing cars look like someday. Autonomous, electric, and available on-demand, the pod-on-wheels could whisk travelers from city to city or out for a night on the town. Outfitted in leather, wood, and marble (!?), the interior is a luxurious cocoon of luxury, protecting the occupants from the outside world. Renault envisions the car being a sort of last-mile extension of the luxury experience from a hotel or airline. If the Ritz–Carlton wants to send one of these to pick me up for my spa weekend, I’d be down.

If the EZ Ultimo is about absurd luxury, the EZ-Pro is about absurd practicality. It’s an autonomous, electric delivery vehicle, able to carry everything from parcels to furniture. Renault envisions fleets of these things carrying packages out to every corner of the city, with room for a delivery… well, not driver, but perhaps facilitator, to actually hand out the goods at their destination. The company even sees the potential for things like a rolling farmers market, with the EZ-Pro pulling up and showcasing fresh fruits and veggies. But how does it look in UPS Brown?