The Porsche Mission E Might Be A Concept Car, But Its 800-Volt EV Technology Is Real 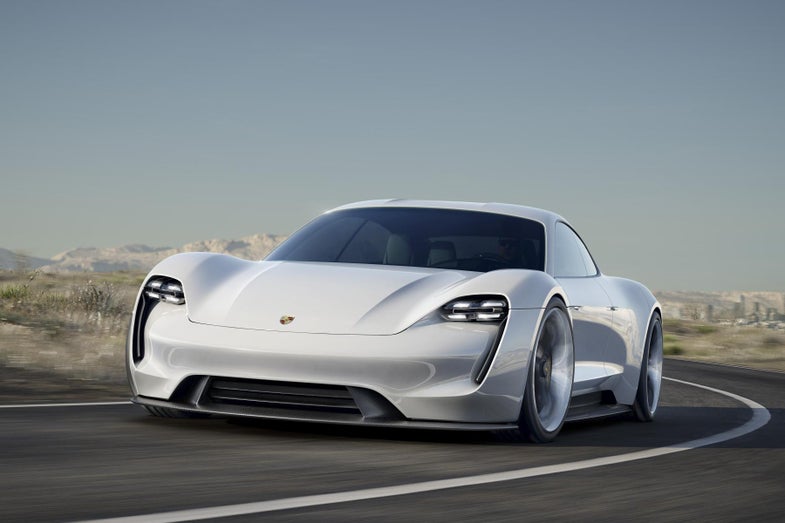 The Mission E electric sports car that Porsche unveiled at the Frankfurt auto show is a concept, but the technology that it showcases is not just conceptual.

Powering the Mission E is a unique 800-volt electric drive system that operates at twice the voltage of current electric vehicles.

Doubling the voltage allows for faster charge times and also reduces weight by allowing the use of thinner-gauge copper cables, Porsche says.

The Mission E’s battery can be charged to 80 percent capacity in about 15 minutes, which would allow 250 miles of driving. That’s assuming the use of a fast-charging system that operates at 800 volts.

Total range for the Porsche Mission E on a full battery is more than 300 miles.

Porsche says its 800-volt system is the first of its kind. It uses two “permanent magnet synchronous motors”—one for the front wheels and the other for the rear wheels. Together the two electric motors develop more than 600 horsepower.

They are similar to motors used in Porsche’s 919 Hybrid race cars, which took first and second place in the grueling 24 Hours of Le Mans endurance race in France this summer—a remarkable feat for any car, but especially ones with nascent hybrid technology.

The electric motors in the Porsche Mission E have the unique ability to deliver full power even after multiple accelerations at short intervals. This benefit no doubt trickles down from Porsche’s elite and costly motorsports engineering and development. By comparison, most current electric vehicles usually require a period of time to recuperate before they can operate at full power again after one or two bursts of full acceleration.

The lithium-ion battery pack is mounted under the Mission E and extends the full length of the vehicle between the front and rear axels, much like on a Tesla Model S. This layout allows for optimum weight distribution, which greatly benefits the driving dynamics.

Currently Porsche does not sell any EVs. But it has two plug-in hybrids on the market, the Cayenne S E-Hybrid and the Panamera S E-Hybrid.

The German sports car maker has not said whether it will create a production version of the Mission E, which has been getting a lot of attention at the Frankfurt auto show. But Porsche is a conservative company that is not in the habit of making concept vehicles just for fun. So chances are good that it might.

The odds are even more favorable given that Porsche is using EV technology in its racing fleet.

The Mission E also would give Porsche a competitor for the Tesla Model S. The Model S is available in various versions, which can drive from 240 to 270 miles on a full battery, and with electric motors that range from 315 horsepower to a whopping 762 horsepower in the hot-rodded P85D variant (that’s a 162-horsepower advantage over the Porsche Mission E).

But even with the Mission E in concept form, Porsche can boast of an advance in EV technology. The quicker charge time and the estimated range compare favorably to other EVs currently on the market.

For example, Tesla’s website says its 400-volt “Supercharger” stations can “provide 170 miles of range in as little as 30 minutes.” That’s 80 fewer miles with nearly triple the charge time when compared to Porsche’s claims for the 800-volt Mission E.

Admittedly, using conventional 120- or 240-volt household outlets would increase the charge time for the Mission E. But having the ability to use an 800-volt charger at all gives the Mission E an edge.

Though Porsche appears to be working toward solving some of the major concerns with EVs—namely, slow charges time and so-called range anxiety—the lack of ubiquitous charging infrastructure remains an impediment, particularly considering that there are currently no 800-volt charging stations anywhere.

The auto show in Frankfurt, Germany, runs through September 27. Other vehicles that debuted there include the Audi e-tron quattro, an electric SUV concept with a range of 310 miles, the Benltey Bentaya and the Jaguar F-Pace, among many more.