A brief history of menstruating in space

Before women started flying in space, NASA was a little worried they might die having their periods. 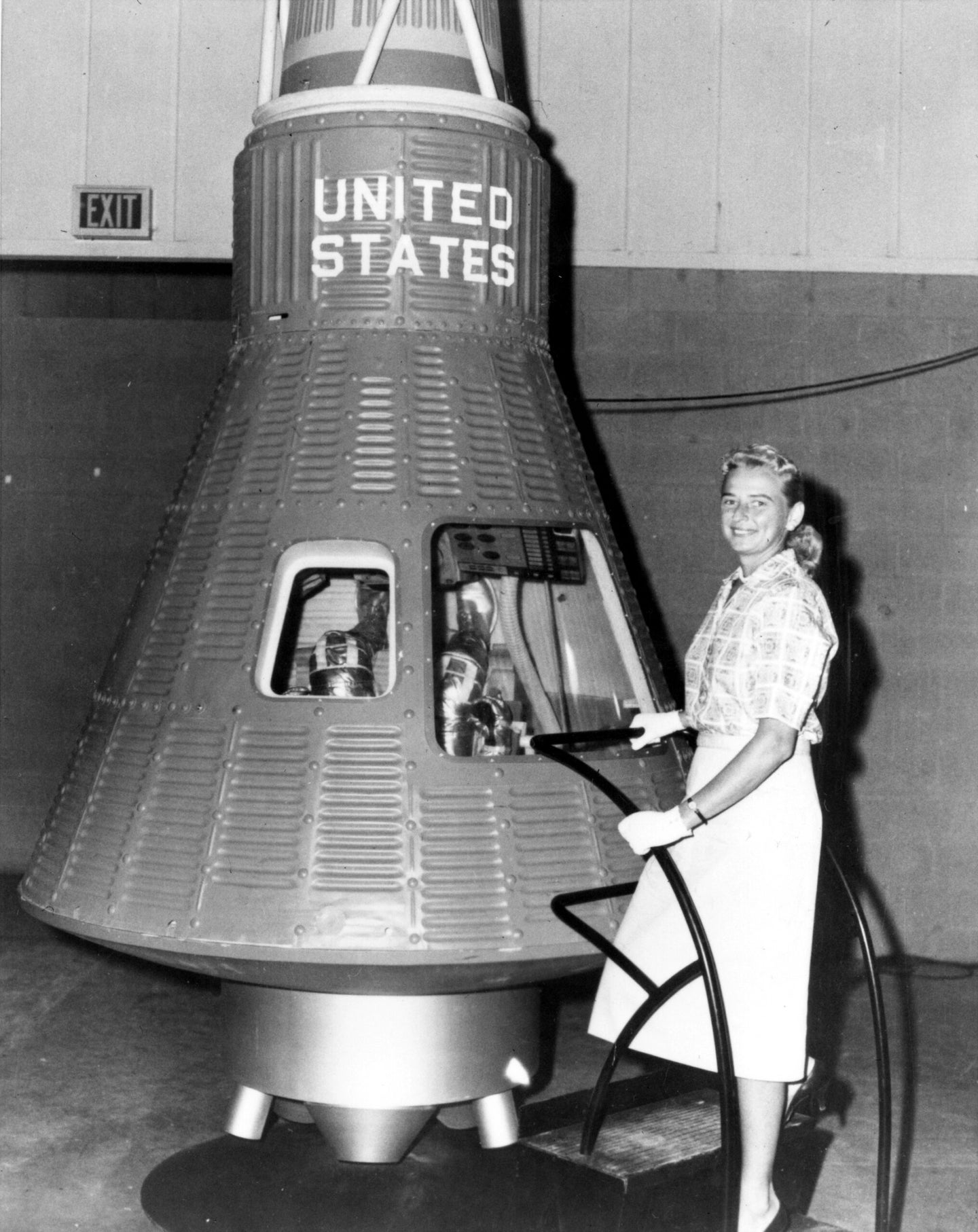 In honor of Sally Ride’s birthday and the historic Falcon 9 rocket launch this week, we’re reliving one of the age-old questions that kept female astronauts out of space for decades.

When NASA was preparing for Sally Ride’s first spaceflight in 1983, there was some question about what should go in her personal kit. Namely, engineers needed to figure out how many tampons she would need for a one-week mission. “Is 100 the right number?” they asked her. “No. That would not be the right number,” she replied. The engineers explained they wanted to be safe, and she assured them that they could cut that number in half without a problem.

After first allowing women into the astronaut corps in 1978, NASA really didn’t know what to do with them. Funny as questions over tampons and possible makeup kits in space seem in hindsight, it’s an interesting look at an agency’s rude awakening when faced with a whole new suite of astronauts.

Women not in space

In 1959, 32 military test pilots went through some of the most rigorous physical testing ever devised at the Lovelace clinic in Albuquerque, New Mexico. The men were probed, prodded, inspected inside and out until not a body single secret was kept from the physicians. Seven of the men went on to pass similarly rigorous psychological screening and emerged as NASA’s first class of astronauts.

The following year, the clinic’s founder, Dr. Randy Lovelace, along with USAF Brigadier General Donald Flickinger invited pilot Geraldine “Jerrie” Cobb to go through the same testing. The men were curious to see how women would fare. On average, women are smaller, lighter, and consume fewer resources than men, making them potentially better suited to flying in the cramped spacecraft of the 1960s. Cobb passed the tests, and by the end of the summer of 1961, another 18 female pilots had submitted to the same rigorous testing as the Mercury astronauts. The only difference was the addition of a gynecological exam.

Thirteen women ultimately passed, proving themselves as ready for spaceflight as any of the Mercury astronauts. They actually had a higher success rate than the men; only 18 of the 32 male candidates passed the physical testing, a 56 percent success rate compared to 68 percent for the women.

But however physically fit, there was some question over women’s suitability to spaceflight. In a 1964 report published after the short-lived women’s program was terminated, the question was raised whether a menstrual cycle would affect a woman’s ability to work in space. The authors point specifically to the “intricacies of matching a temperamental psychophysiologic [read: PMS-ing] human and the complicated machine [i.e. spacecraft].” The difficulties, they said, “are many and, obviously, both need to be ready at the same time [read: the woman would have to time a flight to her cycle].” The implication is clear: a menstruating or hormonal woman just wouldn’t be able to handle herself in the challenging environment of spaceflight.

But it was probably fine, the report concluded, because “it seems doubtful that women will be in demand for space roles in the very near future.” Besides, for the moment in the mid-1960s, NASA wasn’t open to women. The requirements for astronauts stipulated that they be military test pilots, and this excluded women across the board. No amount of campaigning would change the agency’s ruling during the Space Race.

The rules governing astronaut candidacy changed in the post-Apollo era. The agency began breaking its astronauts into two categories: pilots and mission specialists. At the same time it also opened applications to a wider swath of the population. The astronaut class of 1978 brought 35 new members into the fold. Three were African American men, one was an Asian American man, and six were women.

With female astronauts training for spaceflight, NASA finally had to address the issue of merging a “temperamental psychophysiologic human” with a “complicated machine.” And specifically, what would happen when that “temperamental psychophysiologic human” went through a menstrual cycle in said “complicated machine” in microgravity.

By the 1970s, NASA knew that the cardiovascular system was greatly affected by spaceflight. Because humans evolved in Earth’s gravity, our bodies got really good at fighting gravity to pump blood from the lower extremities to the chest, where that blood can be reoxygenated and recirculated through the body. But when there’s no gravity to fight, the system gets sort of “lazy.” The heart doesn’t need to work as hard, and blood and fluids pool in the upper body and head, giving astronauts the characteristic puffy face/chicken legs look.

Knowing this, engineers and flight surgeons weren’t sure if something similar might happen to a menstruating woman in space. If blood in the body pools in the torso and head, could menstrual blood float upwards and pool in the abdomen? Retrograde menstrual flow was a real worry because the consequences could be significant. Worst case, this could cause a condition known as peritonitis, an inflammation of the membrane lining the abdominal wall and organ inside the abdomen. Left untreated, peritonitis can be a life-threatening condition. No one wanted to send a woman into space only to have her die because of her body’s natural cycle.

But there’s a pretty big difference between blood circulation and menstruation (lots of differences, really, to be clear): the former is controlled by a network of arteries and veins that work all the time while the latter is controlled by hormones. The flow of menstrual blood isn’t guided the way circulating blood is. So while male engineers were worried about retrograde bleeding, the female astronauts weren’t worried at all; they expected a period in space to be the same as a period on Earth and wanted to treat it as a non-issue until it became an issue. The problem was, there was no way to prove the women right. Someone would have to menstruate in space to close the issue.

To bleed or not to bleed

It’s not clear who was the first woman to menstruate in space, but someone did it and the answer came back just as the female astronauts expected it would: a period is the same in space as on Earth.

The challenge then became for NASA to deal with its menstruating astronauts. No two women menstruate exactly alike or have the same preferences, so the agency had to make provisions for women to carry the right number of their favored implements on board, be they pads or tampons. But when you’re dealing with spaceflight and rocket science, this is a pretty easy problem to solve.

There is, however, another option for female astronauts and that’s not having periods at all. Properly called medically induced amenorrhea, it’s possible to suppress menstruation by messing with the body’s natural hormones, which is what some birth control methods do. The combined oral contraceptive pill is taken daily. For 21 days the pills contain an active ingredient that suppresses ovulation and thins the uterine lining. The fourth week is seven days of a placebo pill that allows the body to go through withdrawal bleeding, which is different than menstruation. Taking the active pill for a full month, or many months, completely stops any bleeding (though there might be light spotting).

Another option is an hormonal intrauterine device (IUD) that achieves the same result through a localized release of low dose hormones. In some cases, like spaceflight, this could be a better option. Not only does an IUD negate the risk of missing a pill and getting a period, it’s small and inside the body. An astronaut could be in space for years—say, on a mission to Mars—and not have to think twice about menstruating. It would just be a non-issue. And she could resume a natural cycle once the IUD is removed.

Even in the immediate future there are some advantages to astronauts suppressing menstruation. The toilets on the American side of the International Space Station are deigned to recycle water from urine, but they aren’t designed to handle menstrual blood, so minimizing bleeding means more reclaimed water on board. There’s also the practical side of having limited hygiene products and clean clothes in space. Not having to change a pad or tampon could make a trip more comfortable.

But at the end of the day, NASA does have provisions on board the ISS for astronauts to menstruate in space should they choose to go with a natural body cycle or not use hormonal birth control. Which is a good thing. Not only are women not dying having periods in space, they have the same Earthly right to make their own choices about their reproductive health.