Anatomy of a wildfire

The 2011 Las Conchas wildfire was big even before it blew up on June 27. 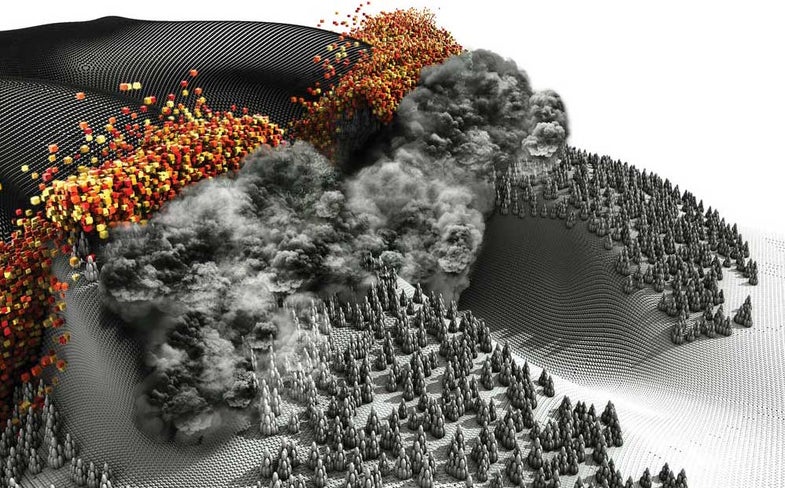 As the wind ignites the blaze, it drives the fire forward in 35-foot flames that look like rolling barrels of fire. Fire Explodes
SHARE

In 2011, a New Mexico wildfire went from normal to nuclear, kicking up a 45,000-foot column of tornadic winds and burning debris. Three local scientists set out to learn why. Below, a breakdown of how a the 2011 Las Conchas wildfire blew up on June 27. This way for the full story. 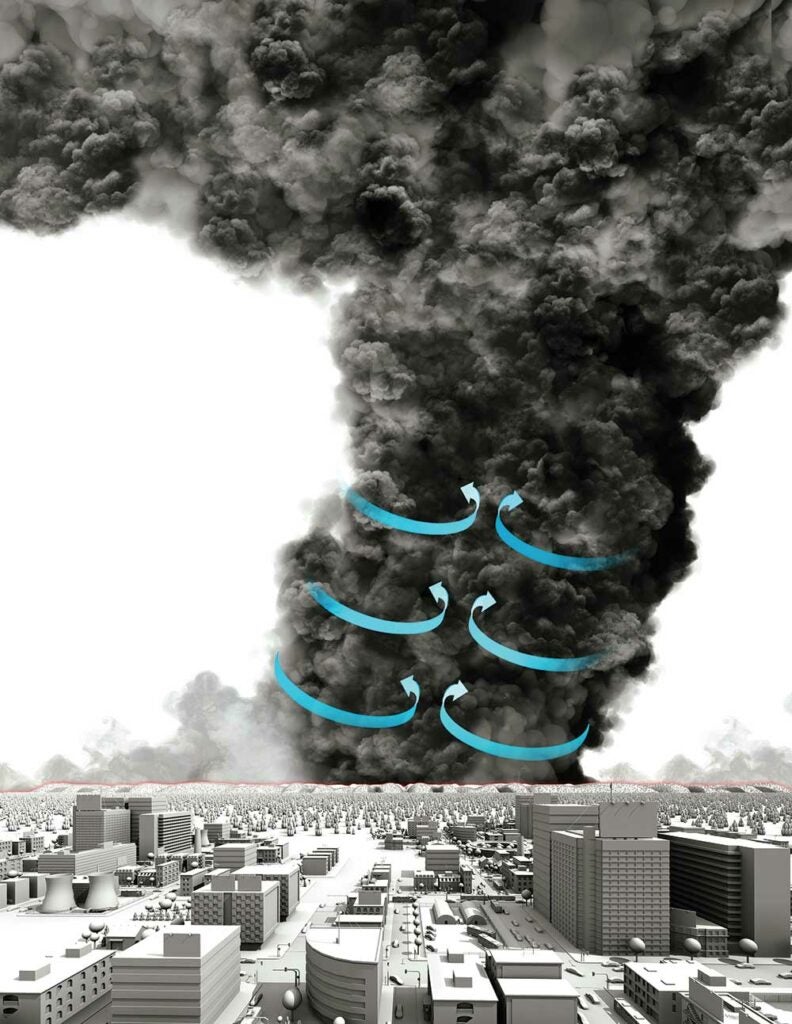 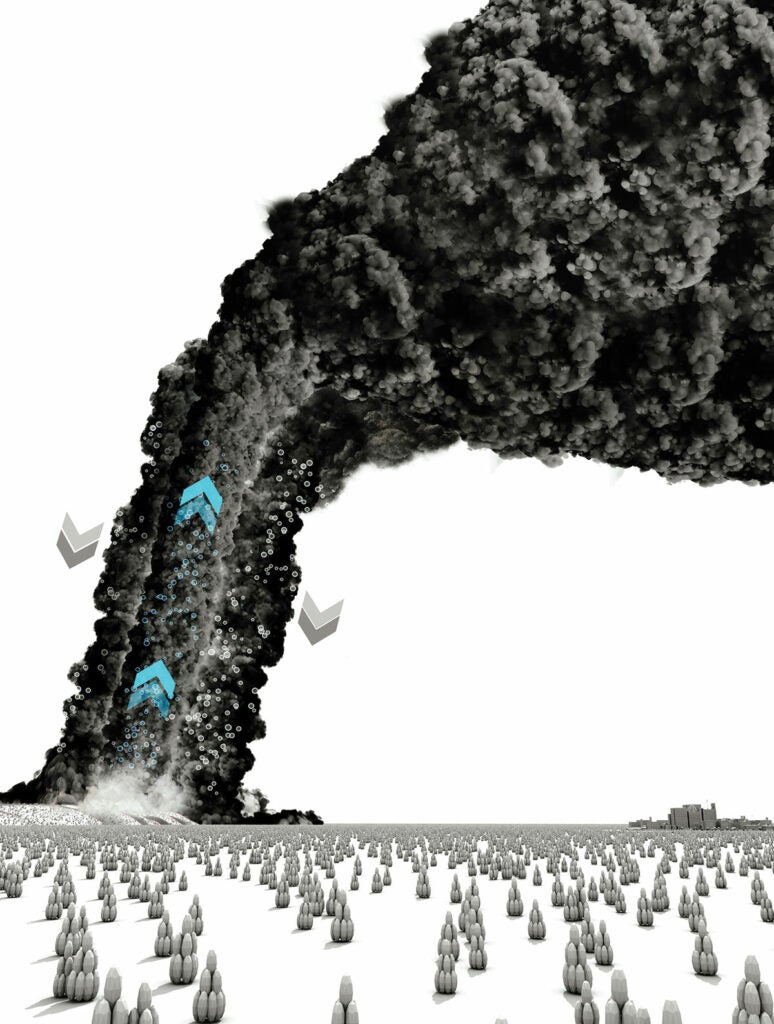 Burning vegetation releases moisture, which the fire’s heat drives up the plume. It condenses into a pyrocumulus cloud, which in turn can create extreme downdrafting winds that can further stoke the ground fire. 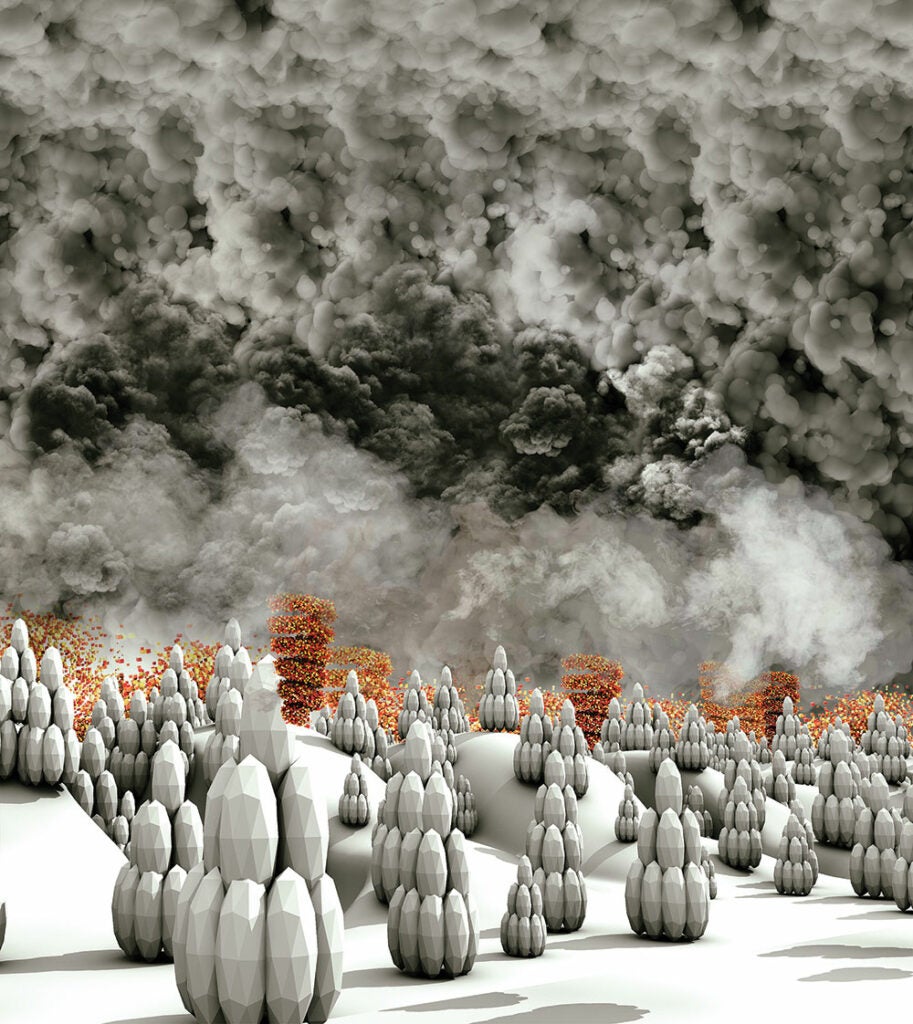 As vegetation combusts, it releases fuel-rich hydrocarbons. Driven by updrafts, they rise and can ignite into towers of swirling flame. 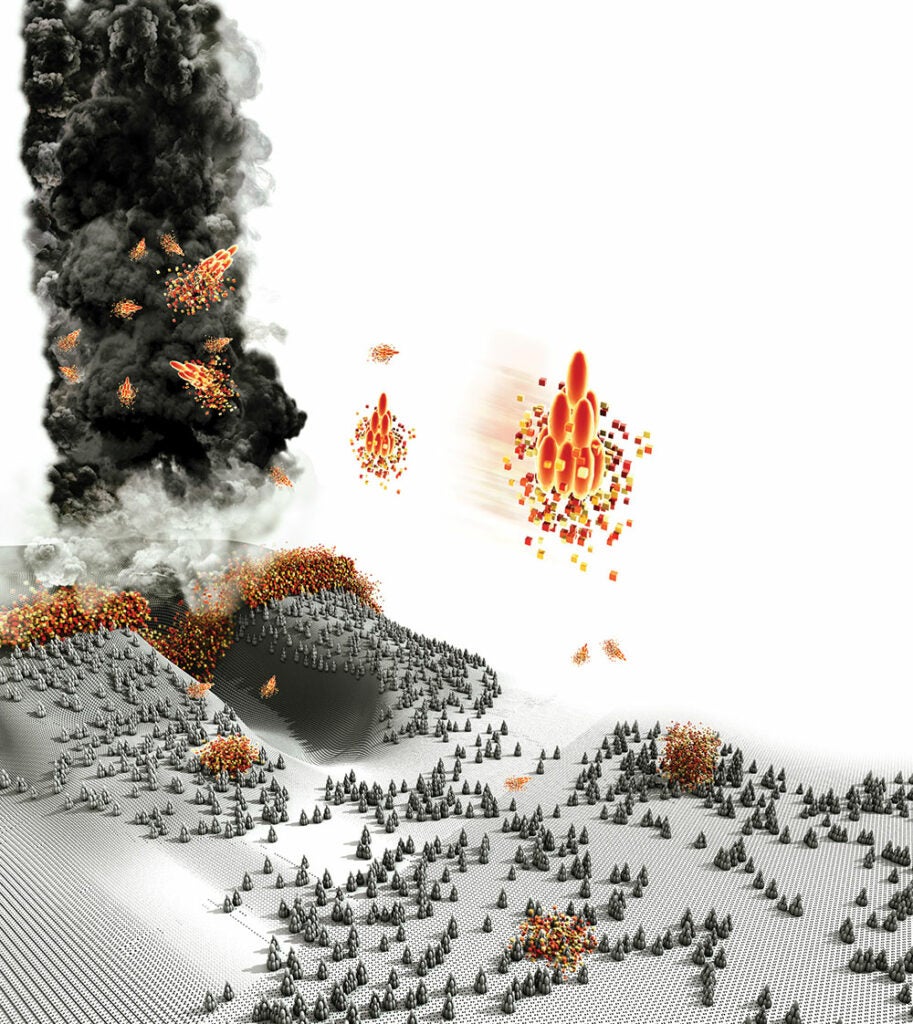 The massive vertical winds inside the column can rip a pine cone off a branch, set it on fire, shoot it a few hundred feet into the air, then spit it as far as 2 miles away, where it can start a new fire.

Experts expected the fire to die down with the cool night air. Instead, it flared into an inferno. Here’s the likely culprit. 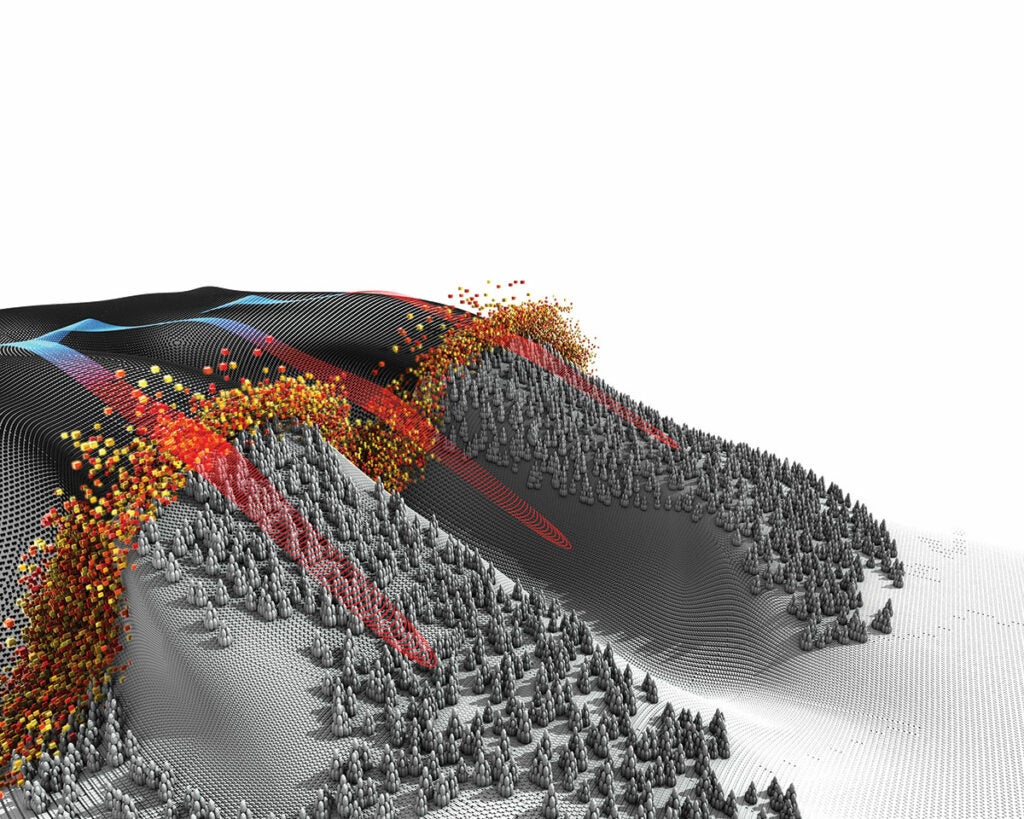 At night, cool dense air pools in the Valles Grande caldera like water filling a 13-mile bathtub. When it sloshes over, it creates 26-foot-per-second winds that fly downcanyon and strike the wildfire’s southern flank. 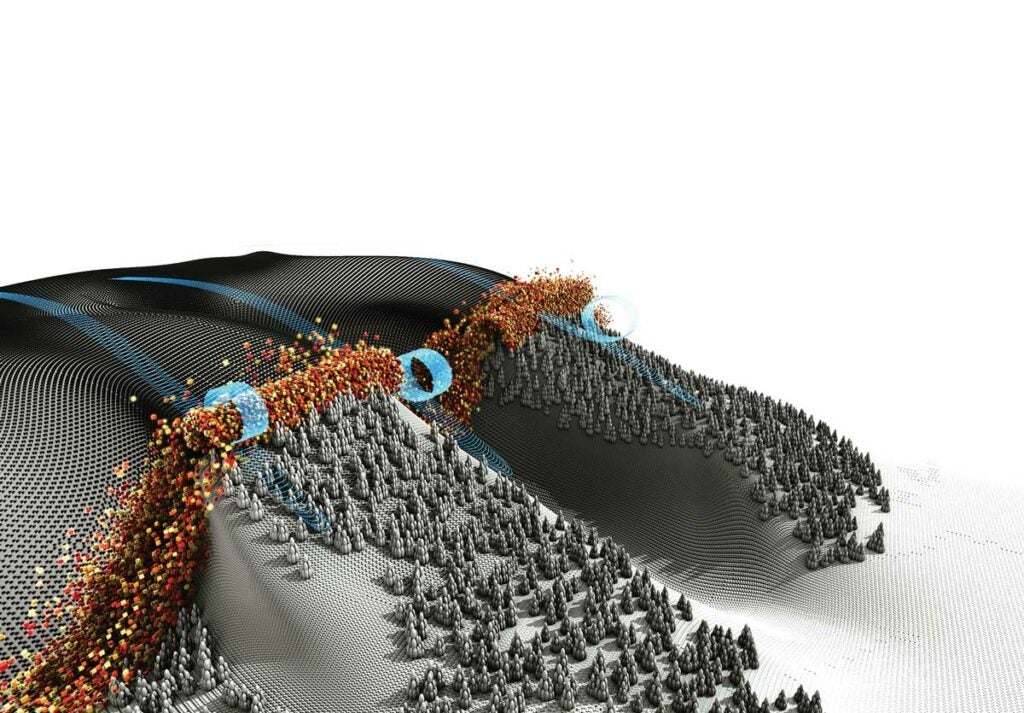 As they squeeze through the canyons radiating from the caldera, the winds gain speed, then rise above the ground and come crashing back like churning ocean waves. 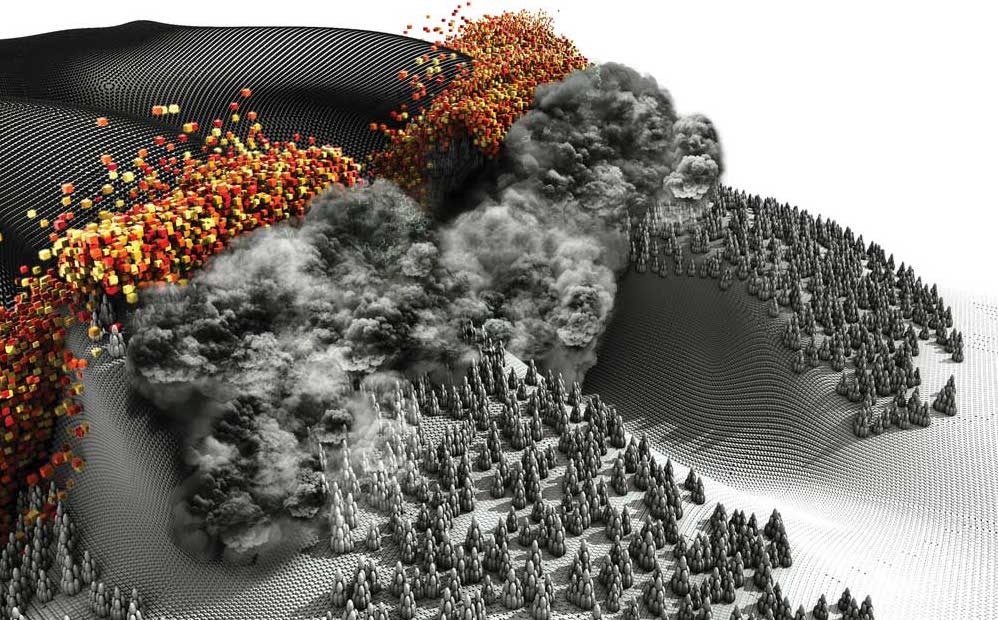 As the wind ignites the blaze, it drives the fire forward in 35-foot flames that look like rolling barrels of fire.