Wingmen of the future could be flying robots that cost just $3 million a pop. 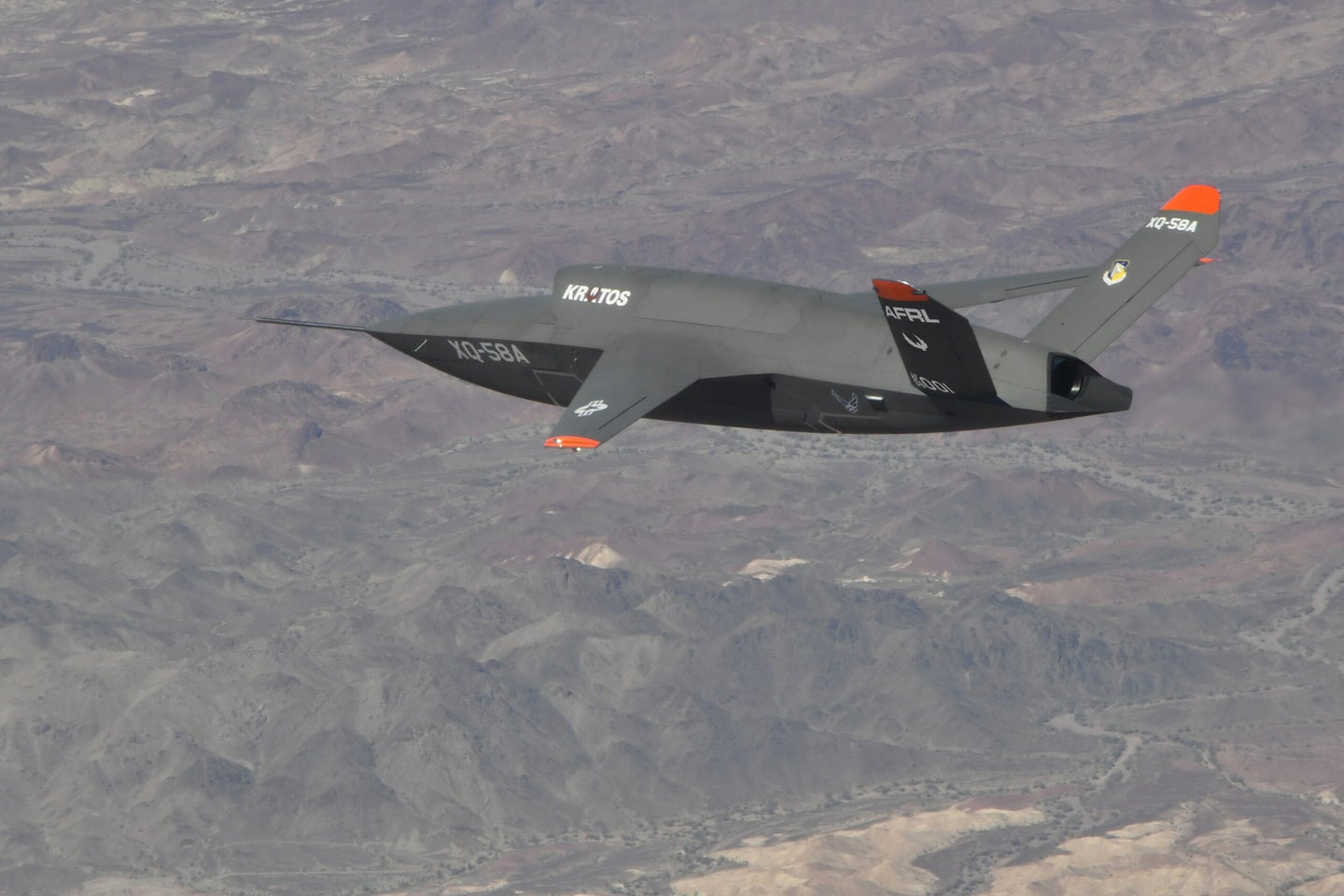 The Valkyrie, the cutest flying companion ever. US Air Force
SHARE

Back in October 2019, the Navy carried out an experiment with three fighter jets—it involved one aircraft remotely controlling two others. While the two remotely controlled craft actually had human pilots in them—for the takeoff and landings—those fighters represented uncrewed airplanes during the exercise. Presumably, the actual flesh-and-blood aviators in those two jets became glorified passengers while the main aircraft controlled them. And eventually, fighter-jet-style craft designed to be remote-controlled might not need a human on board at all, or even have a traditional cockpit.

Details are scant about the experiment, but the Navy completed four flights and multiple “demonstration missions” with the setup, according to Boeing, which makes the planes. The exercises, the Navy said in a statement, saw the two aircraft fly in “multiple preset formations” and send “air-to-air sensor data back to the manned fighter.”

It’s a compelling instance of the military thinking about using aircraft in a new and different way—something between a high-flying drone like a Global Hawk and a traditional fighter jet with a pilot on board. “This technology allows the Navy to extend the reach of sensors while keeping manned aircraft out of harm’s way,” Tom Brandt, who leads what Boeing calls Manned-UnManned Teaming, said in a statement last month. In other words, think of it as a way for a fighter jet with a person onboard to fly on a mission along with pilotless planes that could help it out in some way, such as flying ahead and sending back information.

“This is an example of the Navy experimenting with man-machine technology,” says Todd Harrison, who directs the Aerospace Security Project at the Center for Strategic and International Studies. In this case, the machines in question were Growlers, jets that are similar to the F/A-18 Super Hornets commonly flown on and off aircraft carriers. But, Harrison adds, he doubts the Navy would use a fighter jet with no people on board in the future—instead, the uncrewed, remote-controlled aircraft would be a different kind of craft built just for that job to accompany a regular, piloted plane. These new kinds of aircraft could “go out and operate as scouts ahead of it, for example,” he says.

That’s very similar to an aircraft right that the Air Force has been working on with a company called Kratos. That uncrewed plane is the XQ-58A, or the Valkyrie, and it doesn’t need a runway: It takes off from a rail, lacks traditional landing gear, and “can pretty much land anywhere,” says Michael Wipperman, the aircraft’s program manager at Wright-Patterson Air Force Base. (Although last year, the Valkyrie actually had trouble in that return-to-the-ground department; it “experienced a mishap upon landing,” according to the Air Force.)

The little jet, which has flown four times so far, has a range of some 3,400 miles, and cruises at about 70 percent the speed of sound—but can go faster as needed. It’s that speed that means that it would be able to fly with “aircraft that might want something like that next to it,” says Wipperman. In other words, it could be more of a robotic wingman than a high-altitude drone. It also has a weapons bay.

The Valkyrie is what the Air Force calls “attritable,” which essentially means it’s relatively less expensive than a full-fledged fighter jet and less of a big deal if they lose it. It might cost about $3 million a pop, Wipperman says, as opposed to a new F-35, which cost the Air Force in the ballpark of $80 million per aircraft. A weapon like a rocket or bomb is destroyed when you use it, a regular military jet is hopefully never lost, and the Valkyrie is somewhere in between. It should also cost less than a traditional drone like a Reaper.

The Valkyrie is similar in idea to an Air Force program with a vaguely foreboding-sounding name: Skyborg, which is a type of fusion between autonomous systems, AI, and uncrewed aircraft. (Defense News has more.) Craft in the Skyborg program would be something like a “shell” that could carry different elements like sensors, General Arnold Bunch, of Wright-Patterson Air Force Base, said during a visit to Popular Science in January. Aircraft like that could “serve as a platform that can go out and interact with F-35s, or F-22s, or whatever else,” he said.

The pilot in the F-35, Bunch said, would be like a “quarterback.” The other Valkyrie-style players, in hypothetical scenarios like this, are perhaps flying with the quarterback or forward of it, and are both uncrewed and less expensive than Tom Brady in the F-35.