An F-18 cannot do everything an F-35 can do, unless stealth doesn't matter. 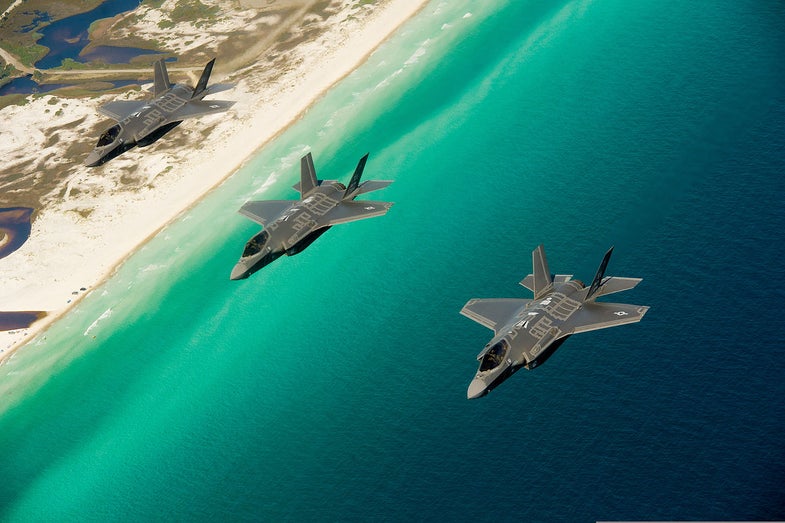 Picture above: three airplanes with a combined worth of at least $324 million. John Nimmo Sr, Department of Defense, via Wikimedia Commons
SHARE

Stealth planes are complex machines. The science of stealth is really two sciences carefully put together: materials and shape, forming an outer casing of an airplane that hides the sensitive guts inside from hostile RADAR. Only a handful of countries have ever developed stealth fighters. Only the United States has ever deployed them in war.

Based on the tremendous cost and cost overruns of the Lockheed Martin F-35, I have asked Boeing to price-out a comparable F-18 Super Hornet!

Stealth is integral to the design of the F-35. A low radar signature means the plane is harder for enemies to see, and so can get closer to targets before it’s in danger. Keeping that stealth body while developing three version: the F-35A for the Air Force, the F-35B with short takeoff and vertical landing capability for the Marine Corps, and the F-35C for the Navy (rugged enough to land on aircraft carriers) meant the planes had to make some compromises in design, like small internal bomb bays for stealth missions. In the 20 years from the start of the development of the F-35, stealth remained a consistent part of the program, one deemed essential by the Air Force and a shared bonus for the Navy and Marines, as well as the foreign allies who are buying the F-35.

Those limitations, and the cost overruns, have left the F-35 both unpopular and without a real, obvious alternative. Trump’s proposal is simple: “I have asked Boeing to price-out a comparable F-18 Super Hornet!” It also ignores the stealth at the heart of the much-maligned fighter. An F-18 is many things, but it is not a stealth jet and the systems built around the F-35 are all built to take advantage of the stealth.

It is as absurd as suggesting that a standard 747 airliner can perform the same role as the expensive, highly specialized Air Force One variants built from the 747 airframe. Or, more plainly, it’s like suggesting a cruise ship can do the job of an aircraft carrier: the body is essential for the role, and whatever else the flaws of the F-35, it has a stealthy body and the F-18 doesn’t.