Bell Made A Tiltrotor Drone With Missiles For Marines 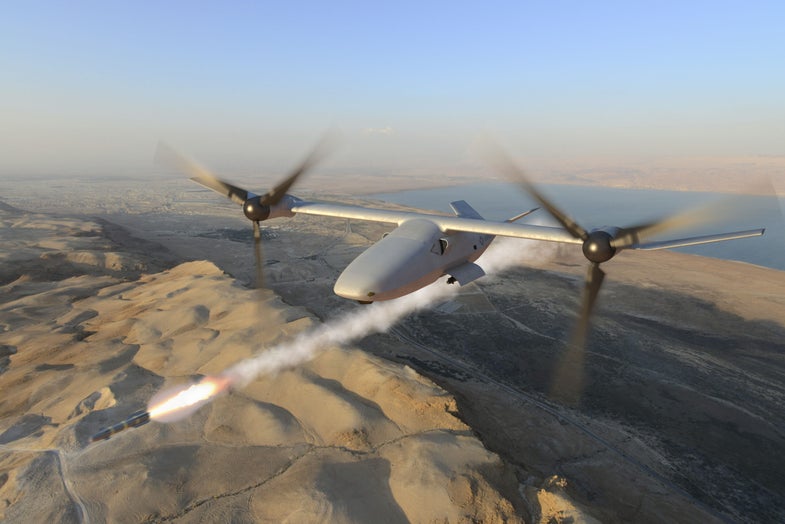 Runways are a hassle. Long, flat strips of unobstructed land are work to defend at the best of times, and can’t always be found in rugged terrain or on small islands. Yet having a fixed-wing plane fly air support is useful, because plane bodies are faster and much more efficient than helicopters. What’s the Marine Corps to do?

If you ask Bell Helicopter, the answer is obvious: a brand-new tiltrotor drone, unveiled today before a crowd of media and experts at that National Press Club in Washington, DC.

This is the V-247 Vigilant. The drone has a maximum speed of 345 mph, though it cruises most efficiently at 205 mph. It can fly at an altitude of up to 25,000 feet, can carry up to 2,000 pounds internally, and has a maximum flight time of 17 hours or a maximum range of 1,600 statute miles (though it can’t do all of this simultaneously). Bell provides an example mission of one where it carries a 600-pound payload to a target 500 miles away, hangs around for several hours, and then returns. And “target” here is key: the Vigilant isn’t just a scout. As designed, it can fire missiles, including Hellfires and its expected replacement, the Joint Air Ground Missile. It can also carry Mk50 torpedoes, making it deadly to enemies in the sea, as well as on land.

The Vigilant weighs 16,000 pounds empty, 29,500 pounds filled to the brim with something slung beneath it, and it has a wingspan of 65 feet with a 30-foot rotor diameter. Two V-247 Vigilants can fit inside a C-17 Globemaster transport, helping them get to where they’re needed. That makes the Vigilant about half the size of the troop-carrying V-22 Osprey tiltrotor, which is small for a plane but still a Group 5 drone for the military, which includes the heaviest and fastest drones.

Bell says it can start producing the V-247 as early 2023, and designed it to meet the needs of the Marine Corps. If the Corps bites, and if the Vigilant works as promised, by the end of the next decade Marines could fly into battle inside tiltrotor V-22s and request air support from tiltrotor V-247 drones, while at the same time soldiers from the Army arrive in Bell’s planned V-280 Valor transport.