What are frankincense and myrrh, anyway?

The history and mystery of these botanicals go way beyond the Magi. 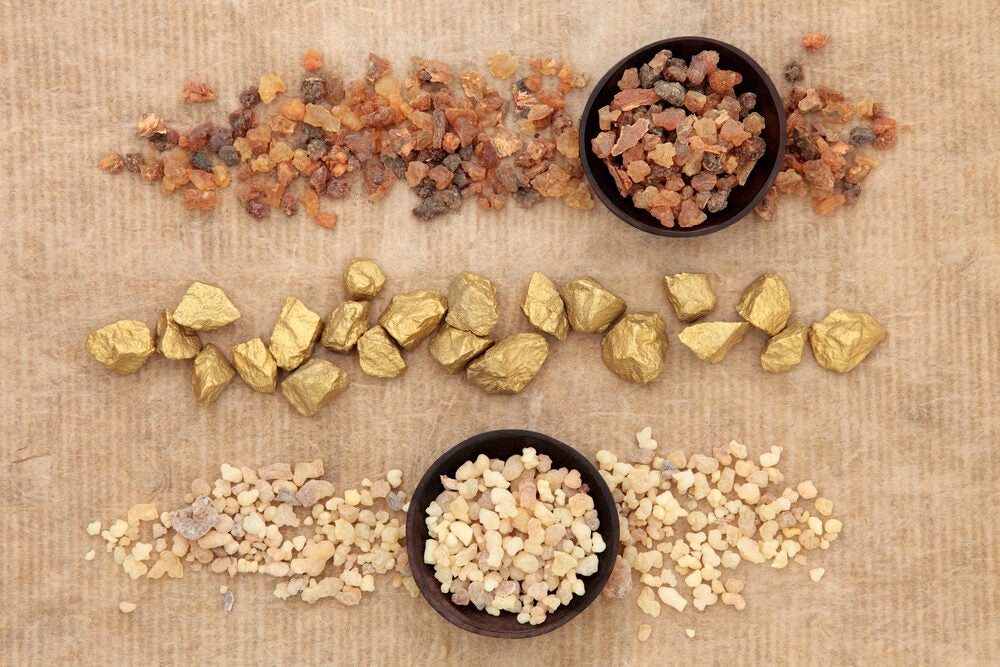 What is frankincense? Let's dive into its origins, as well as its value, next to myrrh and gold. Deposit Photos
SHARE

This post has been updated. It was originally published on December 23, 2020.

The pharaoh Hatshepsut accomplished many feats in her reign over Egypt some 3,500 years ago. One of few women rulers then or now, she concentrated power against incredible odds. She built temples and obelisks of unprecedented size, technical skill, and number. And, the story goes, her explorers, skilled in botanical espionage, secured the empire its first myrrh tree.

Myrrh and its cousin frankincense are known to Americans today, if at all, through the Biblical account of the wise men. In the Book of Matthew, it’s said that three Magi followed the Star of Bethlehem to the birth of Jesus, and gave to him three gifts: gold, frankincense, and myrrh. But Douglas Daly, a curator at the New York Botanical Garden and an expert in the frankincense and myrrh family, says the substances have a rich history far outside the boundaries of a single Bible passage. And, despite millennia of use and study, they’re still yielding new insights to this day.

[Related: 4 plants that are scientifically proven to be therapeutic]

If you held the finished product in your hand, frankincense would look like golden raisins, or fossilized popcorn. It’s a small, dried, and slightly shiny yellow globule. “I liken it to grading diamonds,” Daly says. “It’s about color, it’s about clarity, it’s about shape.” Myrrh, meanwhile, is rougher, brown, perhaps more scatological, though fundamentally similar in size and sheen. But getting the botanicals to this stage takes a lot of work.

Frankincense and myrrh are both resins extracted from trees in the Burseraceae family, also known as the torchwood or incense family. Frankincense comes from the dried sap of Boswellia trees, while myrrh comes from the lifeblood of the Commiphora. Extracting the sap is a tenuous dance—you must injure the tree without killing it. If done properly, the wound will stimulate a process called “gummosis,” which is exactly what it sounds like: the tree tries to gum up the damage, and you can carve off the resulting ooze for your own uses. “Over millennia, people have learned just how far you can go,” Daly says.

Burseraceae may be associated with the ancient world, but it’s still found in tropical regions from Africa and Asia to Central and South America. “Wherever I go,” Daly says, “they’re all used for the same thing… by people who never had any contact.” Everything from the bark of the tree to the sap inside is fragrant, so both frankincense and myrrh are used as incense and perfume. Historically, myrrh was also an embalming fluid—hence Hapshetsut’s dogged interest in the plant. Both have religious value; they were melted to honor the gods and ward off evil spirits. But, Daly says, they also have deeply practical uses, even today.”You find that people use the frankincense and myrrh plant for dozens if not hundreds of purposes, from helping you get pregnant to helping your cows produce milk,” he says. Mixed with other compounds, the resin can even seal the broken hull of a boat. “It’s bewildering the number of uses they have,” Daly says.

Today, gold, frankincense, and myrrh seem like unequal gifts. But in ancient times, the botanical extracts were worth the same, or even more. In the 1st century A.D., the Roman Empire was in deficit spending, Daly says, as it imported hundreds of tons of the smelly stuff each year. Daly likens frankincense fever to the oil wars fought in modern times. Hapshetsut’s spies, who ventured to the “Land of Punt,” or modern Eritrea, weren’t innocently looking for pretty plants. They were trying to secure their own homegrown sources of frankincense and myrrh, “because they were tired of paying through the nose for it,” Daly says. If cultivation didn’t work, conquering the land these plants naturally grew on would not have been above any of these ancient rulers.

Despite thousands of years of documented use, the plants still keep a fair share of secrets from botanists. “The frankincense and myrrh family were really a mess, in the sense that members of the species were either unidentified or misidentified,” Daly recalls from his early days researching specimens. Genetic testing has allowed for more precise taxonomy, but new members of the Burseraceae still pop up all the time, even in territories thought to be well-explored.

Though the price has dropped from the days of Rome, it hasn’t totally plummeted. Frankincense and myrrh are staple essential oils, and have been swept up in recent aromatherapy fads. While more research is needed to show if and how these odors act on the brain to alleviate stress or anxiety, a 0.34 ounce bottle of frankincense oil costs upwards of $8 on Amazon, as does myrrh oil. And the price of an gold, you ask? You’d ring up a bill of about $604 for a nugget of the same weight.