A new analysis highlights how human activity and weather could make certain times of year more perilous than others for wolves. 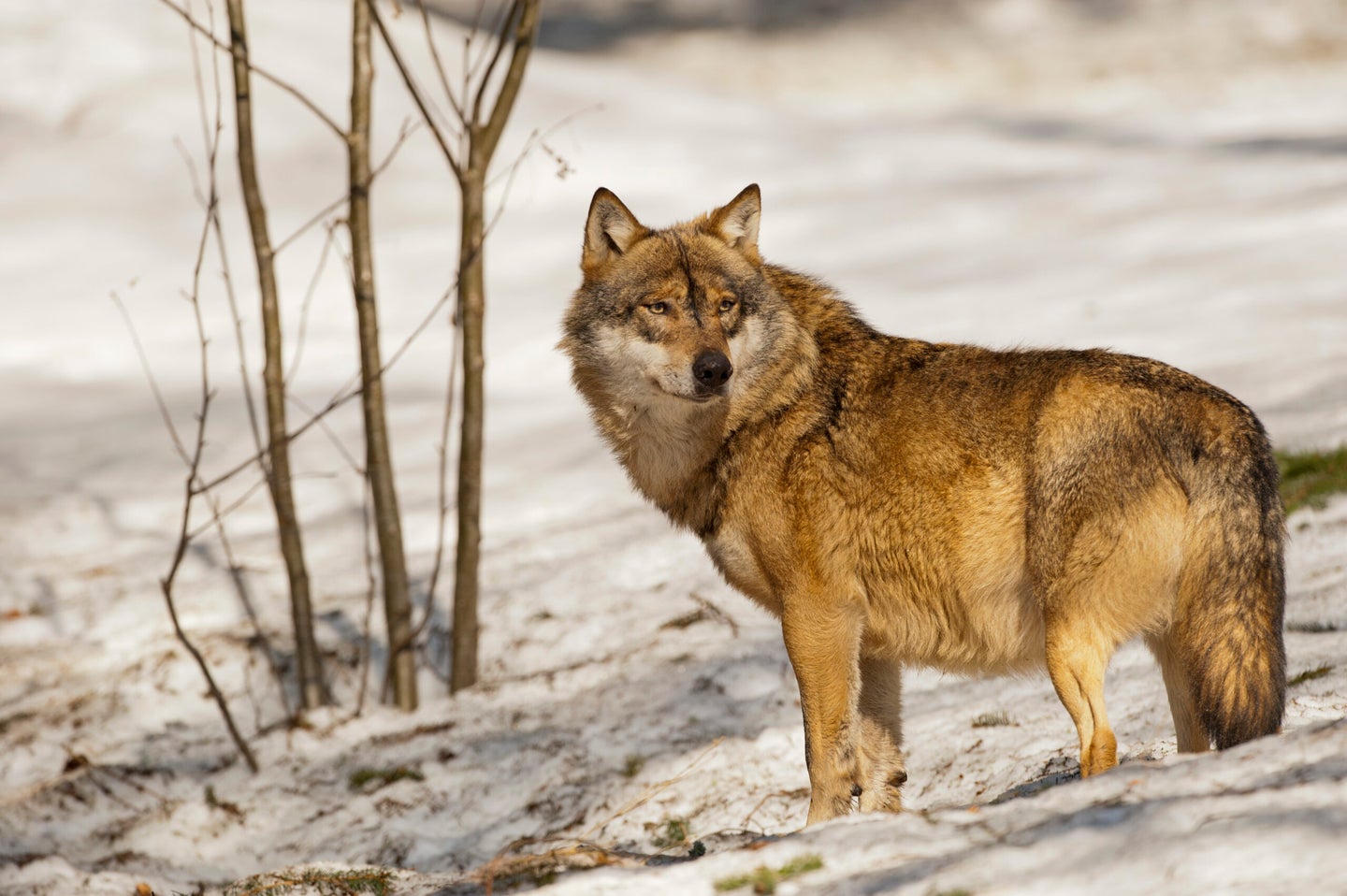 In Wisconsin, poaching that targets gray wolves may be exacerbated by wintry weather and hunting seasons for other animals, a new analysis suggests.

Researchers examined three decades of wolf tracking data and found that poaching in the state increased during snowy periods when wolf tracks are easier to detect. When these conditions coincided with hunting seasons for deer and other large mammals, the rate of poaching increased more than six times. The findings emphasize the need for stronger protections for wolves, the study authors wrote on February 2 in Scientific Reports.

“The odds are that a wolf in Wisconsin is more likely to die of poaching than any other cause,” says Francisco J. Santiago-Ávila, the Big River connectivity science and conservation manager for Project Coyote, a nonprofit based in Larkspur, California, and a coauthor of the paper. Yet poaching is often underestimated when states develop the population estimates used to determine protections and hunting quotas. “It’s critical for state agencies to focus on these periods of time when these [hunting] activities increase, because we’re seeing that poaching increases during those times,” he says.

Gray wolves once ranged across much of North America. However, they were hunted nearly to extinction in the United States during the 19th and early 20th centuries before receiving protection under the Endangered Species Act in the 1970s.

In October 2020, the Trump administration announced that it was removing gray wolves from the list of endangered species in the lower 48 states. This led to a surge in hunting in Wisconsin that Santiago-Ávila and his collaborators estimated dented the population by an alarming 27 to 33 percent. Six Native American tribes in northern Wisconsin and environmental groups filed lawsuits to block a second hunt that was planned to start in November. In October, a judge ordered a halt on the hunt while the state’s Department of Natural Resources comes up with a new wolf management plan, which is expected to be finalized by June.

Previous studies have indicated that poaching is the main cause of death for most wolf populations in the US, Santiago-Ávila says, and that illegal killing increases after protections are loosened. People poach wolves for a variety of reasons, including concern for livestock and general animosity towards the animal and other predators. Some deer and bear hunters also view wolves as competition, or a threat to their hounds.

For the new research, the team investigated poaching during the years when gray wolves were still listed as endangered species. They used data from the Wisconsin Department of Natural Resources, which tracked 495 radio-collared wolves between 1979 and 2012.

To identify which times of year were most dangerous for wolves, the researchers analyzed how the rate of poaching changed in response to weather and human activities. These included the hunting seasons for other animals such as deer and bears, and periods when hunting hounds were trained. The team examined the number of reported poaching deaths, in which a carcass is recovered, as well as cases where wolves vanished when their transmitters stopped working—which is nearly always a result of poachers destroying the collar, says Adrian Treves, an ecologist at the University of Wisconsin-Madison and another coauthor of the new findings.

He and his colleagues found that the poaching slowed during the period from mid-April to the beginning of July, when the snow had melted and hunting and hounding weren’t allowed. “Adult wolves get a breather during that time,” Santiago-Ávila says. “They’re not as easy to detect and there’s no people around.”

Wolf disappearances also increased by more than 50 percent during the snowy period after hunting ended, and by smaller amounts from July through early January. The researchers suspect that poachers are more willing to take the time to tamper with the collars of the wolves they’ve killed when there are fewer people about to notice and report them, Treves says.

The new findings indicate that, even when wolves are supposed to be protected, snow cover and hunting allow poaching to flourish. There are several possible explanations for why poaching seems to shoot up when these two factors coincide.

However, “the chances of being caught increase when there are hundreds or even thousands of hunters in the field,” Treves says. This might cause poachers to change their behavior during hunting seasons, such as leaving the collars behind after killing a wolf in fear of getting caught if they stick around after the act. “There’s a lot of poaching that goes on that is detected because the collars aren’t damaged.”

Delisting wolves as an endangered species and instating wolf hunts in Wisconsin could indicate to the public that wolves aren’t valued and population numbers are not at risk, further emboldening poachers, Santiago-Ávila says.

Aside from restricting hunting, the state could provide additional protection by implementing patrols throughout the forests to deter poachers, Treves says. He and his colleagues have previously observed that poaching diminished when Wisconsin sent people out to monitor wolf populations in the late 1990s.

There’s already strong existing evidence that poaching and other human activities are a major cause of death for large predators, Andrés Ordiz, a conservation biologist at the University of León in Spain who wasn’t involved in the research, wrote in an email. “That is a well-known fact, but [this] study is important because it quantifies poaching in a specific study area and taking into account different factors, such as seasonality, and including a large dataset,” said Ordiz, who studies interactions between brown bears and wolves in Scandinavia. “It seems to me that the results should be taken into account by conservation and management agencies in that area, and the study is interesting elsewhere as well.”

The new study highlights the importance of considering the impact of poaching when estimating wolf populations, Lisette Waits, a conservation biologist at the University of Idaho who has studied gray wolves in Idaho and red wolves in North Carolina, wrote in an email.

“These results are very interesting and valuable for documenting the increased mortality and poaching risks for protected wolves associated with legal hunting seasons,” Waits said. “This study provides insight about the importance of developing policies and procedures such as increased law enforcement during active hunting seasons to minimize risk to endangered carnivores like wolves.”