It’s the trashiest time of the year—but it doesn’t have to be. 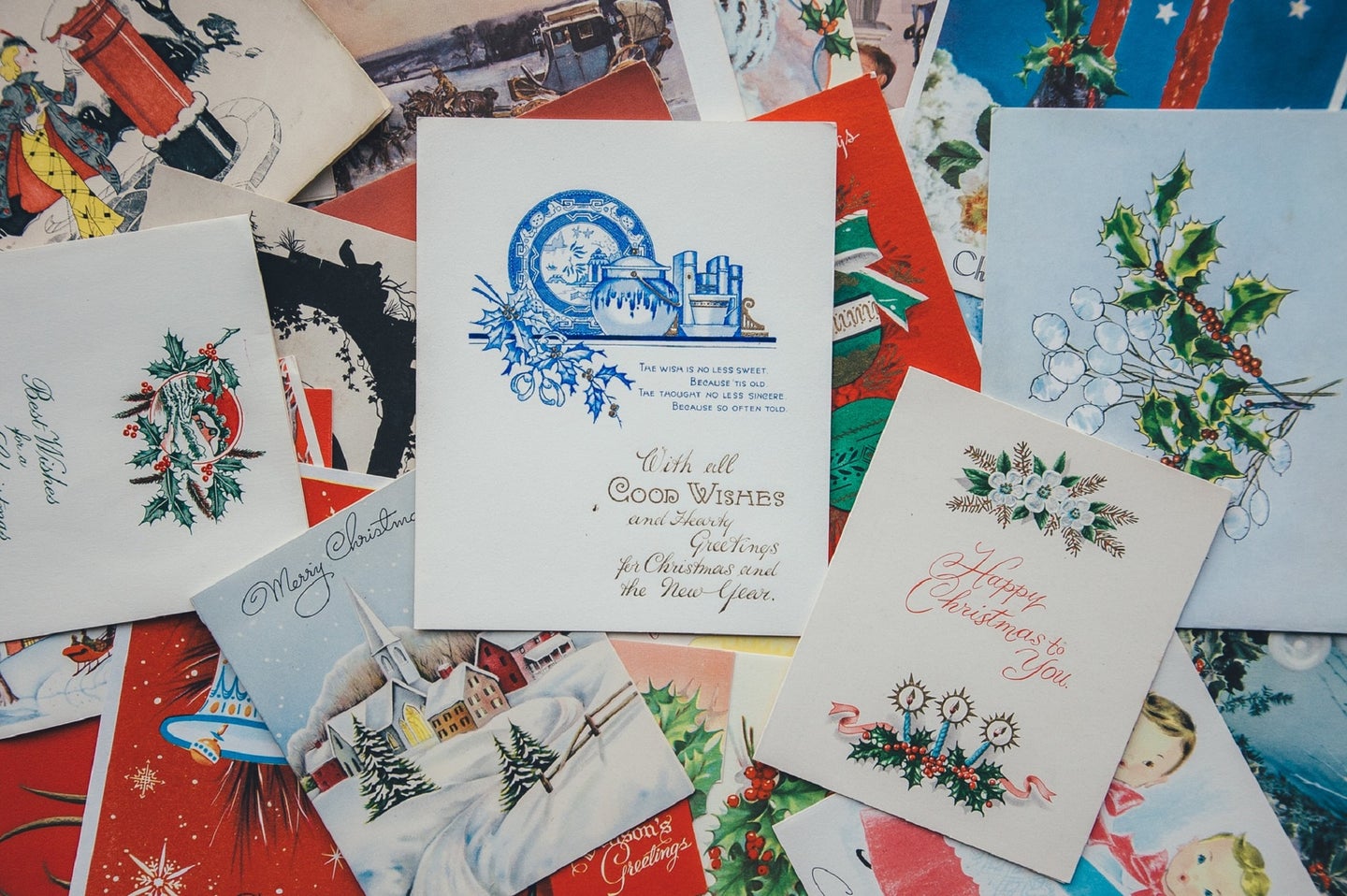 Trim down on waste by sending paper holiday cards that don't have glitter or other non-recyclable fixings. Annie Spratt/Unsplash
SHARE

This post has been updated. It was originally published on December 24, 2020.

Taylor Swift’s “reputation” wasn’t her best album, but the pop star was onto something, scientifically speaking. On the last track, “New Year’s Day,” Swift sings about the aftermath of a holiday party. While the garbage in the track is really a metaphor for the refuse that old loves leave behind (I think), her description of the dark side of holiday cheer—the trails of glitter, mounds of candle wax, and discarded bottles—is all too real. Between Thanksgiving and New Year’s, Americans pile up an incredible 25 percent more trash than they do during any other part of the year.

That holiday waste comes from a variety of seemingly small sources. Ribbon, which is mostly superfluous the other 364 days a year, is in high demand around Christmas time. In fact, one estimate suggests that each year 38,000 miles of ribbon is sold in the weeks surrounding December 25, which is enough to put wrap a bow around planet Earth. Similarly, sales for fake Christmas trees spike in December, as does the amount of green plastic fibers sent to your local dump in January. When you consider the other problems posed by squandered Christmas dinner leftovers or plastic-heavy Hanukkah gifts, the trash pile suddenly seems big enough to threaten your holiday cheer.

[Related: Can this Colorado man put a dent in our trash problem?]

But with a few small changes to your beloved traditions, it’s still possible to reduce your festive footprint.

Use recycled or recyclable wrapping paper

Celia Ristow is the cofounder of Zero Waste Chicago, which provides advice and workshops to locals who want to compost their food waste or repair their old clothes in order to produce as little waste as possible. She told PopSci that holidays are a trying time for those concerned with trash. “With Hanukkah, the trash is spread out over eight days, so it doesn’t look as crazy,” she says. “But with Christmas, when it was all over, someone would grab a trash bag add stuff all that paper in.”

Though she couldn’t do much about holiday waste as a kid, these days she takes substantive steps to keep her wrapping paper in check. “A really hardcore zero waste person might say we don’t need wrapping paper at all, that we can get rid of it altogether. But I am someone who really loves tradition,” Ristow says. “So all year, I’ll save pretty papers that come my way: maybe a catalog, a page of the comics, or brown paper that comes with an online order.” In December, she transforms those odds and ends into wrapping paper. At the end of the day, she picks off the tape and recycles the rest. While she still spends part of the holidays surrounded by mounds of paper waste, Ristow says, it’s good to know it would have been recycled anyway, instead of stuff she bought just for the occasion.

Holiday cards are no different. Every Christmas, Americans send some 1.3 billion cards, according to Hallmark. If these are made of recyclable materials, it presents little problem for responsible disposal. But many cards have plastic appliqués, glitter, or other materials that can’t be salvaged. That’s why zero wasters recommend making your own cards from recycled paper or only buying cards made from recyclable or compostable materials. This is a good policy, but for those of us who already bought elaborate cards, there’s no need to despair. If you can, just separate the paper from the other elements, putting the paper in the recycling bin, and the rest in the trash.

Every year since 1931, a Christmas tree has been placed in Rockefeller Center in New York City. Arguably the most famous Norway spruce in the world, the tree is erected just after Thanksgiving in a tree lighting ceremony broadcast on live TV and taken down in the first week of the new year. Given this year’s tree, a 75-foot looker from Oneonta, New York, is nearing the end of its reign over the skating rink, it’s time to ask, where will it go next? Turns out, the 12-ton titan will be donated to Habitat for Humanity—its timber transformed into a new home.

Unfortunately, the average American’s tree doesn’t do this much good. While anyone can buy a real tree from a Christmas tree farm (like the one Taylor Swift grew up on), the majority of Americans still turn to artificial trees. When a family decides to toss their fake tree, it’s usually sent to a landfill, plastic chemicals in tow. The tinsel it’s draped in gets discarded, too. There has been some heated debate around the carbon footprint of a fake tree, but one analysis suggests that unless you own the same fake tree for 20 years, a real tree (dressed in more sustainable decorations) is the better way to go. While Ristow isn’t getting herself a tree this year, she says Chicago and many other cities offer services that will turn your tree into mulch that can be used in parks and other green spaces around town. If you have the space, you can even replant the tree on your own property and cross your fingers it grows up to be as mighty as the Rockefeller spruce.

Minimize your holiday leftovers by composting or just cooking less

According to the U.N.’s Food and Agriculture Organization, a third of the food produced around the world for human eating gets lost or wasted. A third! In Europe and North America, the average person wastes well over 200 pounds of food in a year. Holiday feasts provide the very best leftovers—why let any of them hit the bin? Here’s a complete guide to reducing food waste this holiday season.

Once you’ve tackled this year’s holiday waste, it might be time to start planning ways to make next year’s festivities even merrier. “Each year, I give myself some time to think through the gifts I can give that really truly be used,” Ristow says. While wrapping paper and Christmas trees pose a challenge, often the gifts we give go to waste, too. For her part, Ristow avoids giving plastic gifts, instead opting for consumables like nice cooking salts or homemade tea mixes. She and her friends swap books, ingredients, and other necessities instead of going for things that are particularly flashy. Ultimately, though, her gift goals are just like anyone else’s—she wants her gifts to go to good use.

While the holidays are clearly rife with opportunities for waste, Ristow says good intentions and good planning are what really matter. When the recycling bin is neatly organized and the trash can is mostly empty, it’s hard not to feel a sense of accomplishment. But if something goes wrong, she doesn’t “beat herself up.” Neither, for that matter, should you.