Beginning in May, a plane will fly across the United States on sunlight alone. In 2015, it will circumnavigate the world. 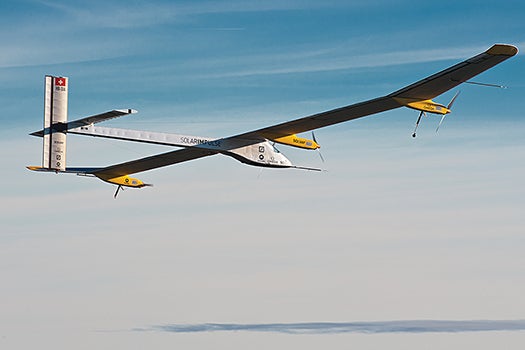 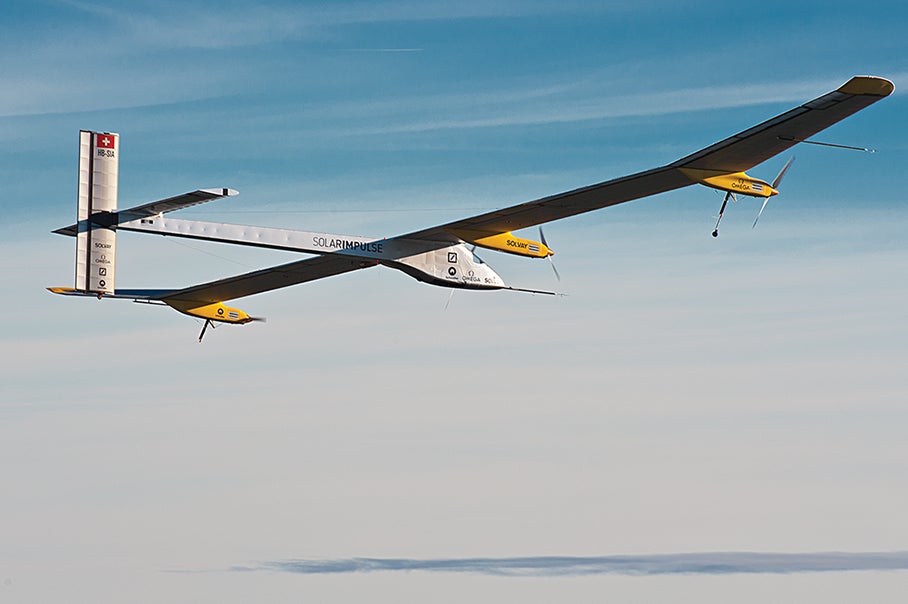 The HB-SIA solar plane flies over Switzerland in 2011.

On the morning of March 21, 1999, Bertrand Piccard and Brian Jones landed their balloon in the Egyptian desert, completing the first such nonstop flight around the world. Amid the celebrations, Piccard made a sobering discovery: The propane tanks needed to keep his balloon aloft were almost empty. “If the winds had been a little weaker over the Atlantic, I would have ditched,” he says. Piccard vowed then to devise a way to circumnavigate the globe using no fuel at all.

Beginning in May, Piccard and a partner will take turns flying a single-seat, solar-powered airplane from San Francisco to New York—a prelude to an around-the-world flight planned for 2015. Named HB-SIA (for Solar Impulse Alpha), Piccard’s plane defies conventional aviation wisdom. When he first told others about his dream, “almost everybody thought I was completely crazy,” he says. Although pioneers like Paul MacCready had been building manned solar-powered aircraft since the 1970s, none were capable of flying after the sun had set, let alone across the Atlantic and Pacific for days at a time.

The obstacle is weight. To fly through the night, a plane must draw upon power from batteries charged during the day. But batteries hold far less energy per pound than a tank of jet fuel, so a plane must carry more weight in batteries to travel an equivalent distance. A heavier plane needs more energy to fly, which in turn requires even more battery power. Add a cockpit and pilot and the craft could be too heavy to even take off. That’s why solar-powered aircraft research has typically focused on unmanned vehicles, such as NASA’s flying-wing Helios. 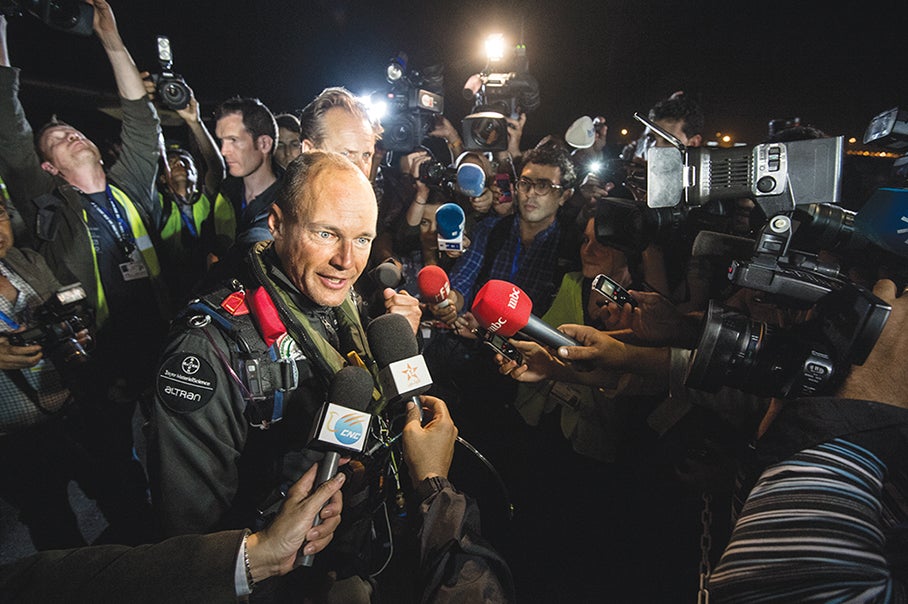 Pilot Bertrand Piccard in 2012, after flying a solar plane across the Med­i­ter­ranean.

Piccard, a Swiss psychiatrist and aviator, comes from a family of adventurers who don’t back down from challenges: In 1960, his father, Jacques, made the first voyage to the ocean’s deepest point; in 1931, his grandfather, Auguste, was the first balloonist to reach the stratosphere. Piccard continued to promote his solar-powered plane concept, and the Swiss Federal Institute of Technology in Lausanne (EPFL) agreed to conduct a formal feasibility study in 2003. It concluded that an ultralight plane with a long wingspan to reduce drag and support solar cells could conceivably work. André Borschberg, the pilot and engineer who led the EPFL study, joined Piccard to officially found Solar Impulse, and they began recruiting corporate and individual donors to help finance the $130-million, 10-year project.

The two men immediately ran into problems finding an aviation contractor to build the plane. None thought it was possible, so they assembled their own motley team of engineers. “I think we have more people from outside the field of aviation than inside,” says Borschberg. Solar Impulse’s head of airplane development, Robert Fraefel, has a background in Formula One racing. Others come from industries such as photovoltaic manufacturing and die casting. “In some ways, it was a big asset not to be too experienced,” Borschberg says. “When you are experienced, you go back to the solution you know.”

The two men immediately ran into problems finding an aviation contractor to build the plane—none thought it was possible.The team decided to construct the frame’s ribs and wing spar entirely from carbon fiber (manufactured by a company that builds yachts) joined by high-performance plastic screws and bolts. The materials are light yet strong enough to give HB-SIA a wingspan of 69 yards—almost exactly that of an Airbus A340-500 passenger jet. Yet the plane weighs just over 3,500 pounds, less than 1 percent of the weight of an Airbus and about 2,000 pounds less than a typical SUV.

To power the plane, engineers laminated nearly 12,000 silicon solar cells over the main wing and horizontal stabilizer. The cells generate an average of 50 kilowatts over a 24-hour period, sending electricity directly to the motors when the plane is in flight and directing any excess to four lithium-polymer batteries. A battery management system ensures the batteries don’t get too cold, reducing their efficiency, or dangerously overheat. 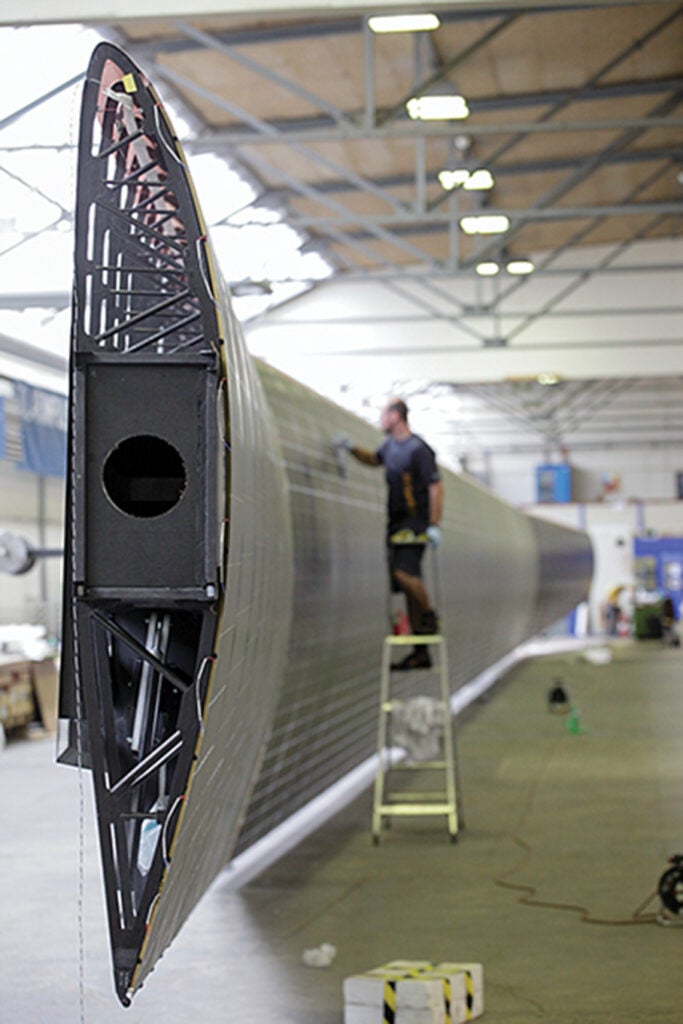 The solar plane’s wing is made of carbon-fiber ribs and spars.

After four years of design and two years of construction, the plane made its first “flea hop”—flying 1,148 feet at an airfield in Dübendorf, Switzerland—at the end of 2009. The real test occurred in July 2010, when Borschberg piloted the plane through the night for the first time above Payerne, Switzerland. “We didn’t know how exactly the airplane would perform,” he says. “Would we use more energy than what we planned? Would we encounter downdrafts?” With no autopilot, he flew in a seated position for 26 hours straight, using yoga techniques to stretch in the cramped cabin. When he landed, he had set three records, including the highest altitude for a piloted solar aircraft, at 30,300 feet, and the longest solar flight, at 26 hours, 10 minutes, and 19 seconds.

The HB-SIA prototype proved the team’s aircraft concept was valid­—but it can’t fly around the world. At the slow speeds of solar aviation—the HB-SIA cruises at about 43 miles per hour—Piccard estimates it will take three days of nonstop flight to cross the Atlantic and five or six to cross the Pacific. This requires a plane with redundant systems and a more ergonomic cockpit, enabling a pilot to sleep; greater efficiency to create more energy reserves; and leak-proof electronics for flying in humid conditions. And so the Solar Impulse team is now midway through building the HB-SIB. “The first airplane has the technology of 2007. The second airplane has the technology of tomorrow,” says Piccard. 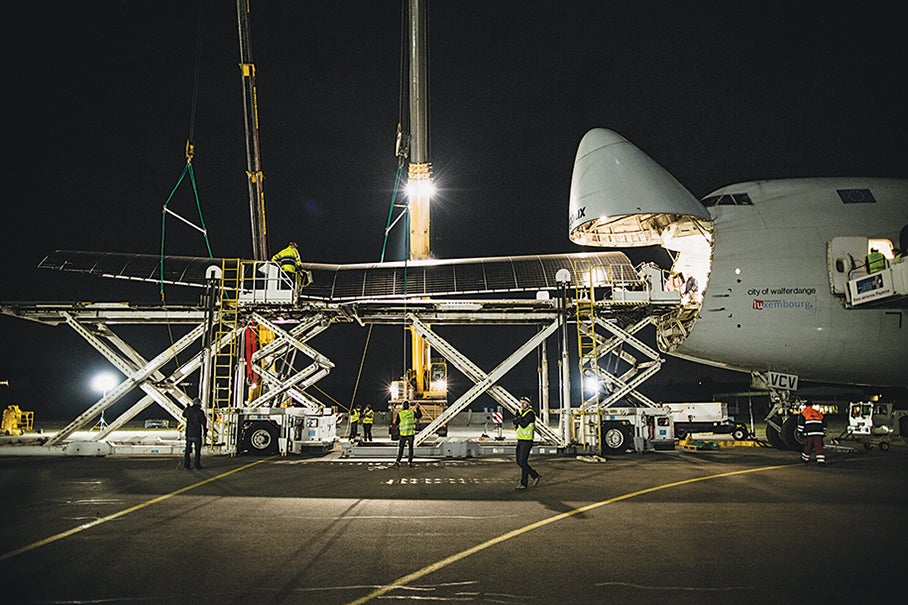 A crew loads the HB-SIA solar plane’s 208-foot-long wing into the nose of a 747. Engineers will rebuild it once it lands in San Francisco for a coast-to-coast flight that begins this month.

The HB-SIB, 11 percent bigger, will have an autopilot, more efficient electric motors, and a skeleton made of even lighter carbon-fiber materials. The batteries will have greater energy density thanks to new electrolytes and electrodes developed by Solvay and Bayer MaterialScience—technology that has already migrated to electric vehicles and consumer electronics. The two companies also developed rigid high-performance polyurethane foams for the plane’s wing tips and cockpit insulation that Bayer is now using in refrigerators and the construction industry.

Piccard is pleased that his project has spurred technologies that may advance other industries, but he also hopes Solar Impulse will galvanize the pursuit of renewable energy. “Very often when we speak of protection of the environment, it’s boring,” Piccard says. “It’s about less mobility, less comfort, less growth.” Instead, he hopes to prove that exploiting the sun’s potential will bring more freedom. 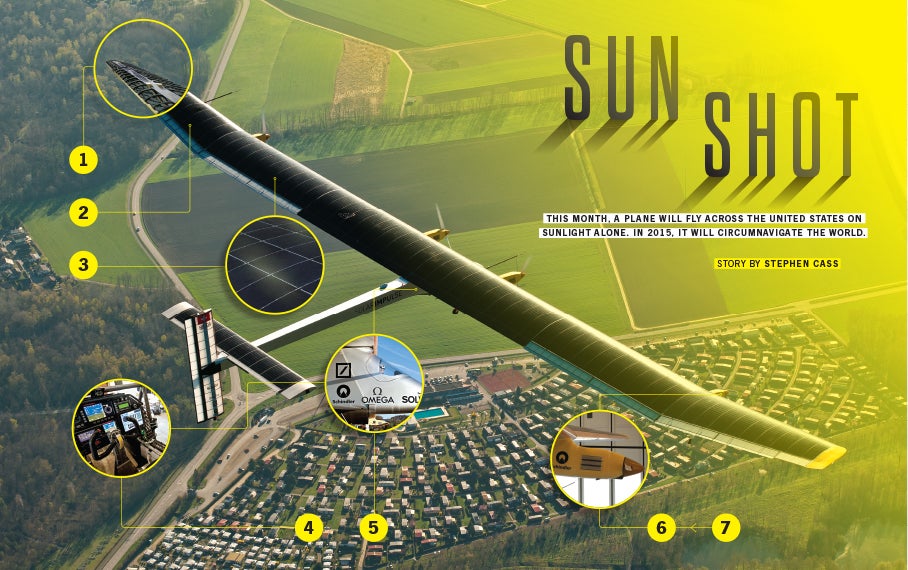 Engineers built the plane’s ultralight skeleton by layering sheets of carbon fiber into struts and spars. Light and rigid foam forms the wing tips and insulates the gondolas and cockpit.

Made from monocrystalline silicon just 150 microns thick, the solar cells cover 239 square yards of the plane. They convert sunlight to electricity at an efficiency of 22 percent.

Because of its wingspan and low speed—about 43 miles per hour—the plane can bank only up to five degrees, much less than a conventional aircraft. The Omega Instrument precisely measures bank angles and vibrates the control wheel if the pilot banks the craft too hard.

Only one pilot fits in the cockpit, and he must remain seated. He controls the plane using a joystick, rudder bar, and four levers.

Each of four gondolas, or pods, fixed under the wing spar contain a battery pack, 10-horsepower electric motor, and gear box that drive a propeller at 400 rpm. By distributing battery weight, the gondolas also reduce structural loads.

Totaling more than 880 pounds, the lithium-polymer battery packs account for a quarter of the plane’s weight. They are highly efficient, storing about 109 watt-hours per pound. 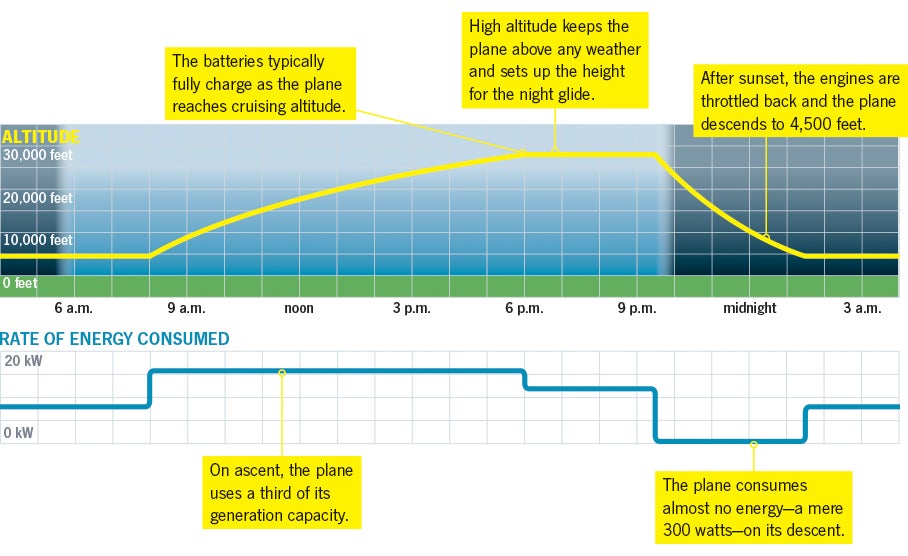 During the day, the solar plane climbs to between 27,000 and 28,000 feet. When the sun goes down, the propellers throttle back to save energy, and the plane slowly descends to about 4,500 feet. It remains at that altitude until the sun comes up and the batteries begin to recharge. Team meteorologists use simulations to determine the best time during the day to climb, taking into account projected winds and cloud cover.

Stephen Cass is a Boston-based technology journalist who frequently covers aerospace and computing.