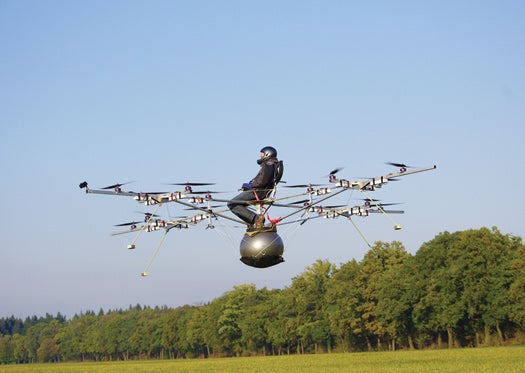 Last October, near Karlsruhe, Germany, Thomas Senkel completed the first manned flight of an electric multicopter, flying it 10 feet off the ground for 90 seconds. Senkel, a physicist and paraglider pilot who helped found the company E-volo to build the craft, invented it after seeing a YouTube video of a German hobbyist’s remote-controlled hexacopter in action.

Multicopters are more stable and easier to control than helicopters. They’re also potentially safer: The craft can land even after four of its 16 rotors, each of which has its own battery-powered motor, have failed. Multicopters could also be fitted with a parachute (which would be caught in the overhead rotor on a helicopter). E-volo says it will build a two-seat multicopter by the spring and begin selling the craft for recreational purposes next year.