The Future Of Flight: Helicopters Will Fly Like Airplanes 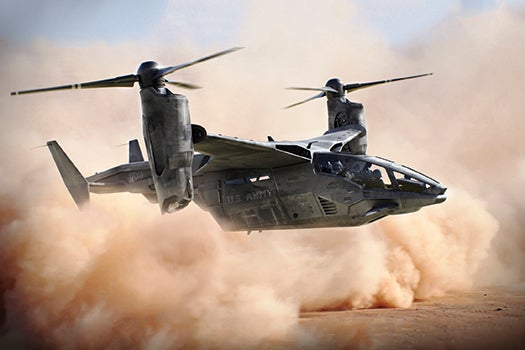 Engineers are designing the first major addition to the U.S. VTOL fleet in more than two decades. The plans are mostly secret, but the craft will likely draw from tilt-rotor, VTOL fixed-wing, and compound helicopter technologies. Nick Kaloterakis
SHARE

In the wake of the unsuccessful Iran hostage-rescue attempt in 1980, when three of eight helicopters failed and crippled the mission, military planners came to a realization: The U.S. fleet was in desperate need of an aircraft that could combine the speed and range of a jet with the vertical lift of a helicopter. In response, they designed the tilt-rotor V-22 Osprey. The V-22 can carry two dozen troops 1,000 nautical miles at speeds around 250 miles an hour. It is one of the most versatile craft in the U.S. Vertical Takeoff and Landing (VTOL) fleet, which includes helicopters and jump jets. It is also the youngest: The V-22 represents the last major addition to the VTOL arsenal in more than 20 years.

As modern warfare evolves to include more lightning-fast, covert strikes similar to the raid on Osama Bin Laden’s compound, VTOL is once again a priority for U.S. military planners. Two programs launched this year could improve the speed, range, and hover efficiency of VTOL aircraft: In March, the Army launched a program that officially began accepting designs for technology that could be used in next-generation rotorcraft. Sikorsky and Boeing filed a joint proposal based on Sikorsky’s X2 rotor and propeller system; Bell Helicopter, the co-developer of the V-22, submitted an updated tilt-rotor; and European aerospace giant EADS put forth a design likely based on Eurocopter’s experimental X3. And in February, DARPA announced a $130 million VTOL X-Plane program that asks aerospace engineers to propose entirely new approaches to VTOL—a fixed wing, a rotary wing, or maybe something in between.

With top speeds of more than 250 mph, improved VTOL aircraft could increase military reach, shorten travel time for combat troops, and deliver personnel and cargo virtually anywhere, regardless of terrain. While the precise designs will remain secret for a while—both the Army and DARPA programs plan to fly demonstrations by 2017—they will likely draw from three existing technologies, as illustrated on the next page. After 24 years without significant innovation, VTOL is flying high once more.