Forget Kenny Loggins and let’s take a minute to put the real Danger Zone in perspective. Flying jets off and... 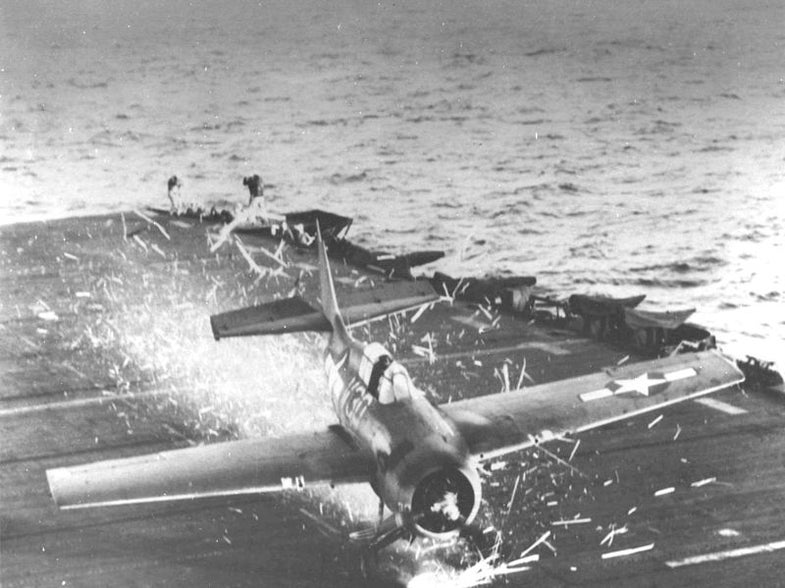 Forget Kenny Loggins and let’s take a minute to put the real Danger Zone in perspective.

Flying jets off and on ships has historically been a high peril endeavor. Especially on.

More than 12,000 aircraft were lost (both figures were dug up from the Navy Safety Center in an essay on the Navy’s transition to jet aviation included in the U.S. Naval Institute’s One Hundred Years of U.S. Navy Air Power (DISCLAIMER: My day job is working for the Naval Institute).

That number includes the aircraft and airmen lost in combat, but combat losses are tiny compared to the number lost in just attempting to take off and land on a carrier. Here’s several reasons why (before anyone complains, this list is far from exhaustive).

During flight operations an aircraft carrier has to keep about 30 kts (34 mph) of wind across the deck to help provide a boost to the aircraft taking off. (That’s one of the reason the largest carriers are nuclear powered, to move the ships to generate the wind).

A giant steam catapult under the deck launches planes up to about 170 mph to provide the rest of the go for the aircraft.

So that means landing pilots have to take in to account 100,000 ton ship moving at a speed that will get you a ticket on some residential street.

In addition to going forward, the carrier moves in several other ways. Six to be exact. A ship can move front to back (surge), side to side (sway) and up and down (heave). The ship can rotate along each axis — pitch, roll and yaw respectively.

With that in mind, now imagine attempting to land on the top of a five story building in an earthquake (Or pick another analogy. There’s several to choose from).

The excellent PBS documentary Carrier has a pretty harrowing 20-minute sequence in which USS Nimitz is pitching and rolling and yawing and the F-18 pilots are attempting to land on the flight deck in the dark (one Marine captain lands is F-18C after the fifth or sixth attempt and shows the rest of squadron how bad his hand is shaking).

As large as a carrier is (the patriotic like to say a Nimitz-class carrier is four acres of sovereign U.S. real estate anywhere in the world) the area to land is very small.

A plane landing on a carrier moves from about a 150 mph to zero in seconds. The plane stops by catching a hook on a steel wire connected to giant hydraulic motors underneath the flight deck. Hooking the arresting wire is tough, made tougher when the carrier is in motion (see previous sections on the carrier and how it can move).

The target wires (four on older U.S. carriers three on newer ships) exist in an area a little larger than a football field (317 feet) but you really only want to catch the third wire (second on newer ships).

Miss the wires and then you have to take off down the runway at max power to try and give the landing another go. A pilot comes up short, they risk hitting the back of the carrier. For some of the larger aircraft — like the Navy’s E2 Hawkeye — the width margin for error can only be a foot.

Dangers On the Deck

Written in giant yellow letters on the side of every island (the aircraft control tower looking structure on the right side of the carrier) are the words: Beware of Jet Blasts, Props and Rotors.

Pick a direction and you can encounter any number of dangers.

Case in point, Petty Officer J.D. Bridges was a sailor onboard an aircraft carrier in 1991. While training a replacement he was inspecting the hook-up of an A6 Intruder to one of the carrier’s catapult. While moving to the front of the aircraft he got sucked into the Intruder’s jet intake. Bridges was lucky and got wedged in the intake before he was sucked toward the rapidly spinning blades of the engine and the pilots quickly turned off the engine.

He escaped with relatively minor injuries — and maybe the title of luckiest man alive. Rotor and prop wash and jet blasts can easily throw a person over the side. In case of that eventuality, or a downed plane, there’s a search and rescue helicopter constantly on standby.

Fire is also another worry.

The deck is a busy place, full of dangerous things — like bombs, bullets and fuel. In 1967 a Zuni rocket on a F-4 Phantom misfired and started a massive fire onboard USS Forestall. The fire on the deck burned for hours and cost the lives of 134 crewmembers. Metals like magnesium and phosphorus used in munitions can combust causing Delta-class fires. The metals burn at thousands of degrees and are very difficult to put out.

Relative to the Ocean, a Carrier is Pretty Small

Before GPS, it was much harder to find the carrier in the wide ocean. Pilots relied on a combination of inertial navigation, radio communications and good old-fashioned maps. Capt. Jim Lovell — best known as the commander of the ill-fated Apollo 13 space mission — tells a story about returning from a 1954 mission in his McDonnell F2H Banshee night fighter. Due to an electrical failure, Lovell’s instruments went dark in the cockpit. In the middle of the ocean at night with the cockpit lights out he noticed a glimmer of photo luminescent algae that had been stirred up by carrier USS Shangri-La. He followed the trail home and landed safely.

As technologies improve the landing experience is getting better. In 2013 the Navy was able to land an unmanned aircraft completely autonomously using a highly precise GPS system that was tested on the service’s Super Hornets. The Navy is also testing an improved system to land the aircraft in conjunction with the Air Force. Regardless of improvements, landing on a carrier is about as harrowing a day job as man has thought up.