Video: Electric Version of Tiniest Manned Plane Ever Takes to the Skies

An ultralight kit plane designed in the 1970s has become the first four-engined electric plane to take to the skies.... 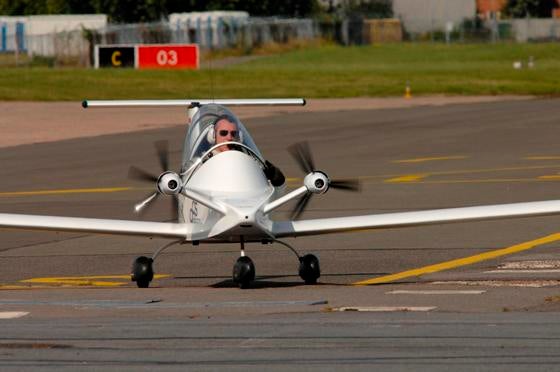 An ultralight kit plane designed in the 1970s has become the first four-engined electric plane to take to the skies. Weighing in around 387 pounds — including the pilot — the all-electric Cri-Cri flew for seven minutes at Le Bourget airport near Paris last week.

Four brushless electric motors, each powered by a lithium polymer battery, replaced the aircraft’s typical two piston engines. They provide 22 kilowatts of power to the four counter-rotating propellers, enough for takeoff, landing and some aerobatics.

With current battery technology, the Cri-Cri, which is French for “cricket,” will be able to cruise for 30 minutes at 60 knots. It can also perform 15 minutes of aerobatic maneuvers at speeds up to 135 knots, and climb quickly to an altitude of 11,000 feet, the level at which oxygen deprivation might become a problem.

Aerobatics can only begin after five hours of flight and 15 landings, so there’s still a long way to go. But pilot Didier Esteyne had fun so far: “This aircraft flies very smoothly, much more quietly than a plane with conventional propulsion,” he said in a news release.

The European Aeronautic Defense and Space Co., owner of Airbus, unveiled its electric Cri-Cri in June at a green aviation show at Le Bourget.

It is built from composite materials to make it lighter, compensating for the weight of the batteries. The Cri-Cri was originally designed in the 1970s by French aeronautical engineer Michel Colomban.

The electric Cri-Cri is a test bed for battery systems that could be used in future drones, helicopters and other aircraft, according to EADS. Check out this video of its maiden flight.