They Said It Couldn’t Be Done!

The quest for human-powered flight 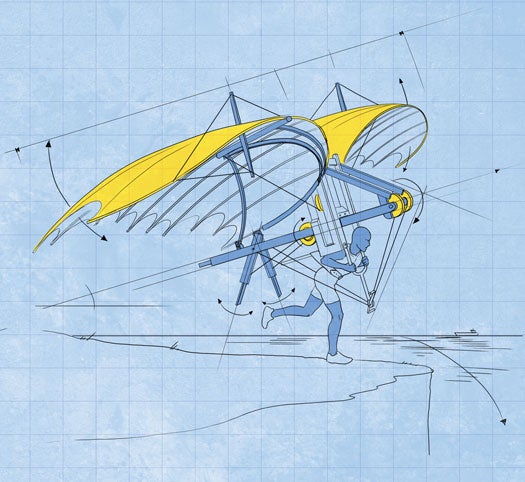 Da Vinci sketched the oldest known plans for a human-powered aircraft in 1485. Yet it wasn’t until 1977 that the first one truly flew. Flight requires lift, when the net air pressure pushing upward counteracts the craft’s weight. For years, many assumed that flight required more lift and more power than the human body alone could provide (although the admonitions did little to stop myriad failed attempts). But inventors persisted.

Aircraft fly using three basic configurations: fixed wing, flapping wing, and rotors. In the last 50 years, inventors have conquered fixed-wing and flapping flight. Now they are on the verge of overcoming the greatest challenge yet: vertical takeoff.

To fly a human-powered helicopter, a pilot would likely have to produce 500 watts of power. Even the fittest pilot could not sustain that output, says Antonio Filippone, an aeronautical engineer at the University of Manchester in England who has published two papers analyzing theoretical human-powered helicopters. “You can lift off,” he says, “But for more than a few seconds, it is not possible.” We’ve heard that sort of thing before.

The Challenge: Fixed-wing flight requires an efficient airfoil, such as a wing that’s curved on top and flat on the bottom. As the airfoil moves forward, air streams faster over its top than underneath it, creating a difference in pressure. When the pressure below the craft overcomes the pressure above it, there is a net upward force. Most planes use engines to get enough forward motion, but people can’t propel a vehicle nearly as fast.

The Solution: In general, the longer the wings, the more lift. In the early ’60s, Southampton University undergraduates built a 130-pound craft with an 80-foot-wingspan and a bicycle-style transmission connected to a propeller. It flew a third of a mile but had significant steering problems. In 1977, engineer Paul MacCready designed the Gossamer Condor, a 70-pound aluminum and plastic craft with a canard—an airfoil on a boom in front of the fuselage. It was more maneuverable than its predecessors and flew in a figure eight around markers a half-mile apart, winning the Royal Aeronautical Society’s prize for the first controlled and sustained human-powered flight. There’s still room for improvement. For example, engineers have refurbished the ’90s Airglow (seen here) with bent wingtips and curvier wings—improvements that stabilize it during turns.

The Challenge: Small animals such as hummingbirds beat their wings fast enough to stay aloft entirely from flapping, pushing more air down than they do up and creating a net upward pressure. But at large scales, it’s difficult to beat quickly enough to remain in the air. Bigger flappers, therefore, require a boost from forward thrust. Think of an engine pushing forward a flapping-wing plane, or ornithopter.

The Solution: Larger birds’ wings flap, but they also twist forward and back as if jiggling a doorknob, which generates extra forward thrust. So as a graduate student at the University of Toronto, aeronautical engineer Todd Reichert and fellow students designed their craft, named Snowbird, with wings that both flap up and down and twist 10 degrees. They used computer simulations to fine-tune their design. And they gave Snowbird a wide, 105-foot wingspan and employed carbon fiber and Kevlar to keep it light. A person generates power in the 94-pound craft using a leg press similar to those found in gyms.

On August 2, 2010, on a field in Ontario, a car towed the craft forward until it glided into the air. Then the car stopped towing. As Reichert worked the leg press, the Snowbird flapped its wings and flew on its own at a height of 11 feet for 19.3 seconds, traveling 475 feet.

The Challenge: A helicopter flies when its spinning rotors force air down, which decreases air pressure above the craft and increases it below. Unlike planes and ornithopters, helicopters cannot rely on forward motion, making flight much more challenging. Helicopters also generate turbulence that can cause serious stability problems. Several teams are trying to prove that they can conquer vertical flight by winning the American Helicopter Society’s Sikorsky prize, a standing $250,000 award for a human-powered helicopter that hovers for one minute and hits a minimum altitude of three meters (9.8 feet), while staying within a 10-meter (33-foot) square.

The Contenders: The University of Maryland team’s Gamera II helicopter is a quadcopter, a craft with four 42.6-foot-wide rotors connected to a bicycle-like transmission. Several smaller rotors near the ground can lift off more easily than a single large one. They also balance one another for better stability. Each tweak to their design has yielded better results—in June, a pilot sat and pedaled with his hands and feet to raise the Gamera II about a foot off the ground for 49.9 seconds, and then in August, a pilot topped out at eight feet.

Aeronautical engineer Neal Saiki, who designed the first human-powered helicopter to lift off in 1989, is back with a new craft: the Upturn. A pilot pedals to spin its single, 85-foot-wide rotor with four blades, two of which have propellers at their ends, which help with stability. Each blade also has an adjustable flap and a sensor to detect vibration and balance, and Saiki’s software tweaks the flaps’ angles in real time to compensate for wobbles. In June, a pilot lifted the Upturn two feet for about 10 seconds.

The competition is still heating up. Snowbird co-designer Todd Reichert officially registered for the helicopter prize this July with a new group, but it hasn’t yet released a full design of its quadcopter. Maryland continues to improve its craft. Saiki aims to use a stronger pilot. And team gravity will be fighting all of them every step of the way. 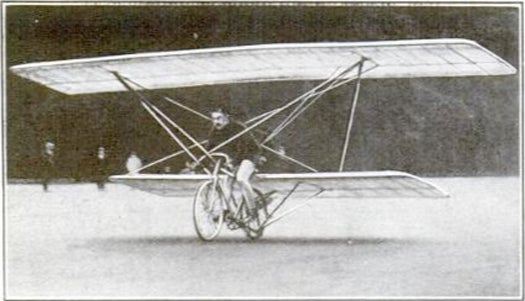 PopSci‘s first mention of human powered flight came as the result of tenacity. The Peugeot prize was offered to anyone who could make it 10 yards in a human-powered aircraft. “After many attempts, several of which were almost”–_almost_–“successful,” we wrote, Frenchman Gabriel Poulain made it, going a full 13 and earning 10,000 francs for his effort. Even more impressive: Poulain moved his winged bicycle at a full 30 mph before taking off, which we estimated took about three horsepower. 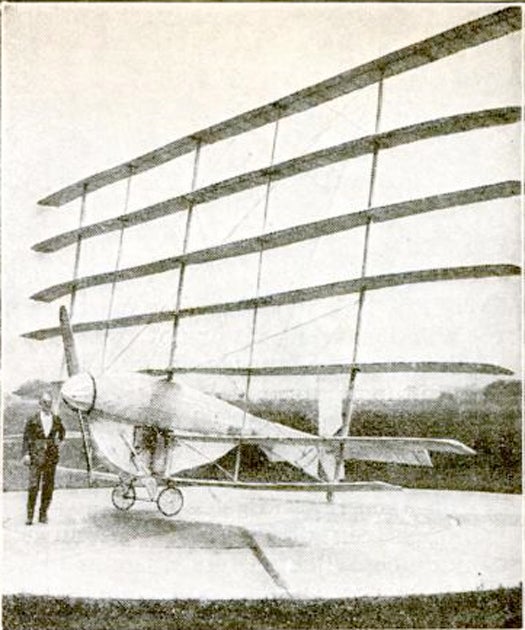 W.F. Gerhardt of Dayton, Ohio went all out on a septuple-winged cycleplane, traveling 20 feet and rising two feet from the ground in what we call the world’s first aerial bicycle–which looks pretty much the same as what we already called the first human-powered craft. (Historians, by the way, probably won’t crown the first human-powered flight for a few decades.) We weren’t altogether kind to the craft, describing it as “admittedly crude in construction, being hastily built.” But since it was almost literally papier-mâché–the framework was covered in paper–maybe that was fair.

Another Frenchman–apparently this sort of thing was en vogue with them in the first half of the century–named Dubois developed this “ornithopter” flapping-wing robot-bird contraption. Pretty, but there’s no indication in the article that it ever flew.

We stopped talking about sky-going bicycles for a few of decades–and engineers, who were building war planes and nuclear weapons, probably stopped building them–but man-powered flight got a competitive boost in the early 1960s, when a London Industrialist announced he would award $14,000 “to the first airplane to take off and fly, under muscle-power alone, in a figure-8 course around two markers a half-mile apart, crossing both starting and finishing lines with ground clearance of at least ten feet.” A group of engineers in England built the Puffin with the aim of claiming that prize, but the craft’s 93-foot wingspan and ultra-low cruising altitude made 180-degree turns all but impossible. Still, in the spring of 1962, Puffin’s chief designer and pilot crushed previous records when he went airborne for nearly 3,000 feet–over half a mile–before landing and collapsing in total exhaustion. We covered the Long Ballad of the Puffin in a 1971 cover story all about human-powered flight. 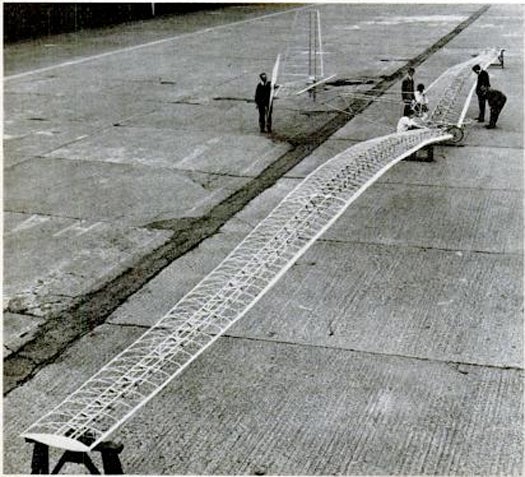 By now it seemed like wingspan had a serious effect on human-powered craft’s performance (they were right, turns out), and the January 1971 issue of PopSci also might have showcased the end result of that idea: this behemoth. Christened the Weybridge, it had a 120-foot span (a Boeing 747 has a 104-foot, by comparison) yet weighed only 130 pounds. 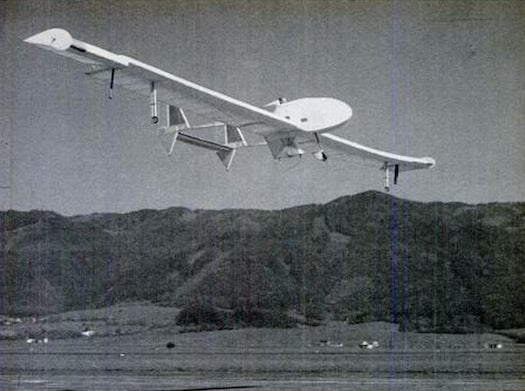 We ran an update in 1972 on the status of human-powered flight, noting the push to turn it into a mainstream sporting event a la Redbull’s Flugtag. You can see the zeitgeist shifting: we’re still referring to the flights as “hops” like we’re discussing high-end beers, but now we’re talking about distances of 100 to 200 yards. Not bad. 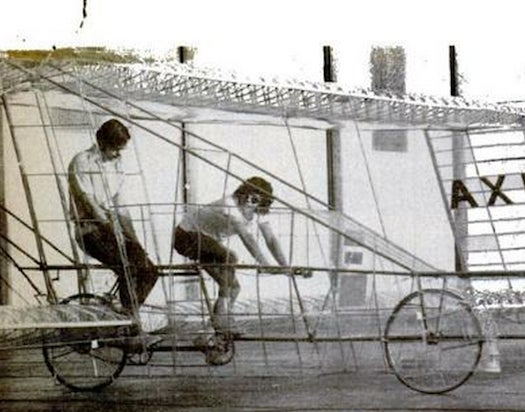 “How do you win the Kremer prize,” we teased, “a staggering $120,000?” Not easily. To take the crown and the cash you’d need to pilot a human-powered craft in a figure eight, across two markers a half mile across. But that 120k made the prize the biggest in aviation history, and more than a few participants were gearing up to test their engineering prowess, including MIT’s BURD (pictured here) and an ultralight 92-pound monoplane. 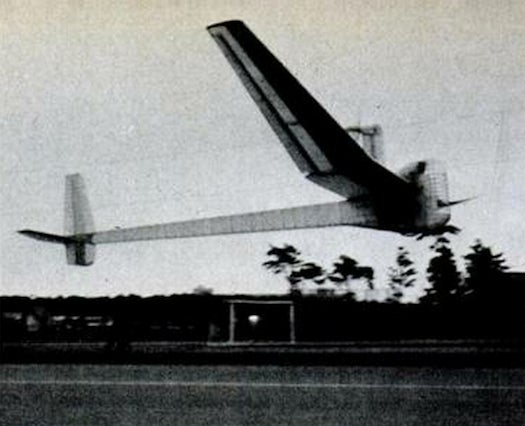 21-year-old Takashi Kato made an impressive (relatively, anyway) human-powered flight in 1977, covering more than 2,000 meters in 27.8 seconds at 10 feet above the ground. Not only great for a college student, but great in general–we’d never seen anything like it. It broke previous records for human-powered flight and was a big contender for the Kremer prize (now with a paltry $86,000 purse), which still hadn’t been completed. 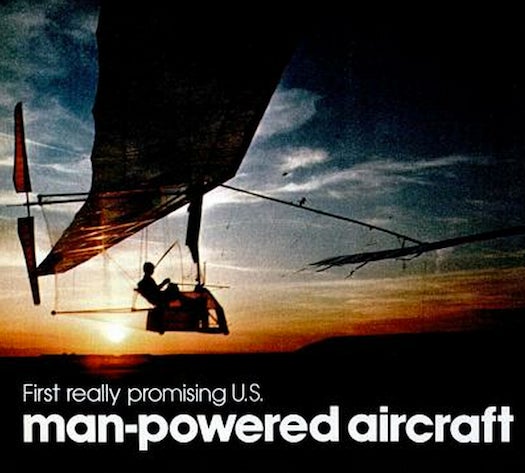 Our love affair with The Stork was brief. Five months after featuring it we were on to the next big thing: the Gossamer Condor. The 77-pound machine with a 96-foot wingspan received the excited title of “first really promising U.S. man-powered aircraft.” We even threw it right in the poor Stork’s face, saying the Condor had “outdone its sole rival.” But (spoiler alert) we ended up being right. The Gossamer Condor was the first to take the Kremer prize. 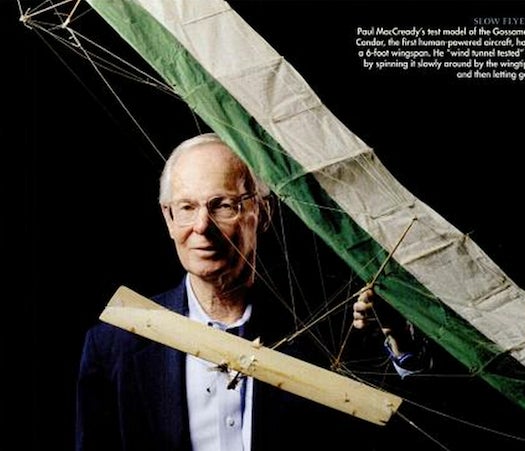 By 2003 it was time to assess the still-young history of human-powered flight, and there was no better way than a poignant profile of Paul MacCready, creator of the Gossamer Condor (now, with hindsight, officially deemed the first human-powered craft). By that time MacCready’s company, AeroVironment, was designing “the most innovative unmanned aerial vehicles,” but the Kremer prize took the focus of the article–MacCready’s designs had won it twice, helping him pay off a substantial debt he accrued in the ’70s from a business investment and turning him from hobbyist to pioneer.
Aviation
feature
flights
human-powered flight
october 2012