Bell’s new helicopter may look strange, but it could reduce accidents and noise

The four small electric fans in the back are a dramatic change from the way a traditional tail rotor works. 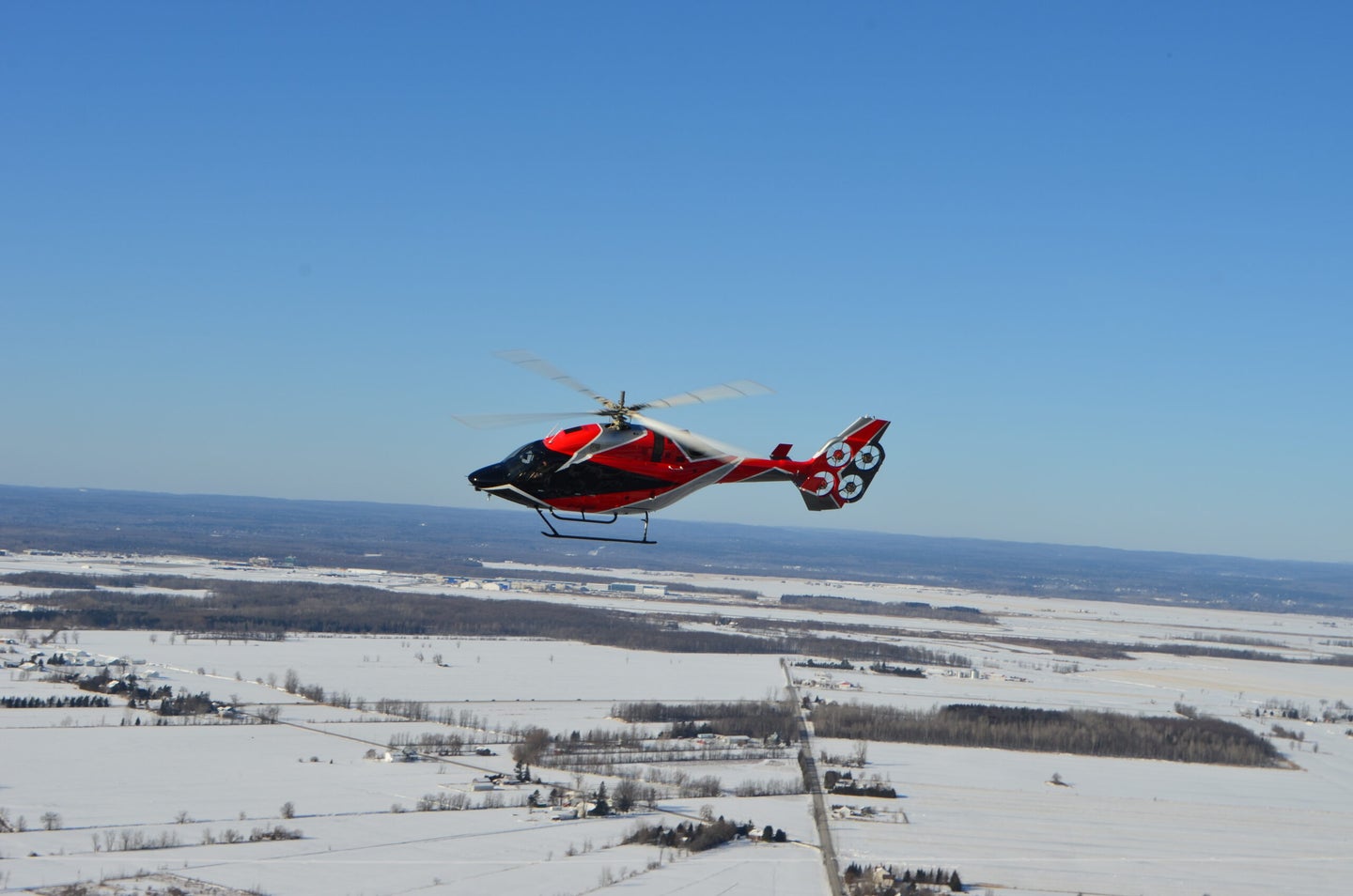 Watch a helicopter fly, and the big spinning top rotor hogs the spotlight. After all, that’s the main mechanism that allows a whirlybird to defy gravity and soar through the air as the pilot commands.

But there’s a key supporting actor on nearly all helicopters: the smaller tail rotor. It plays a crucial role as an anti-torque device—it prevents the helicopter from spinning around in circles in response to the movement of the main rotor, and also allows the pilot to adjust the direction the nose is pointing when the chopper is hovering.

But helicopter-maker Bell has been flying a new experimental craft with a totally different tail rotor, a system that could be safer in some cases, and is also quieter than a traditional tail rotor. It consists of four spinning fans enclosed in ducts, and what’s more, they’re electrically powered. That’s radically different from how a regular tail rotor works. In fact, Bell claims this is the first helicopter with this type of tail to ever fly. It’s a hybrid, of sorts, between a regular chopper and what the future of one aviation sector could look like.

In a typical tail rotor, those spinning tail blades are connected mechanically to the aircraft’s engine. Physical components such as drive shafts, gear boxes, and couplings do the work to turn it. That rotor always spins at the same number of revolutions per minute. When the pilot wants to orient the nose one way or another by pressing on foot pedals, the blades of the tail rotor change their angle, but they never change their speed. And when the main top rotor is spinning, that tail rotor is always spinning, too.

With the new Bell aircraft, the four fans in the back aren’t connected mechanically to the chopper’s engines and main rotor. Generators connected to the top rotor’s gearbox produce electrical power, which zaps through wires in the helicopter’s tail boom to power the motors that spin the fans.

This new setup allows Bell to do some interesting things with that tail. The most dramatic is that they can simply turn those fans off in some cases, even when the main rotor is spinning— something that’s impossible to do with a conventional craft. That means that when the helicopter is on the ground with its main rotor twirling, there’s no dangerous tail rotor spinning near people. The four fans can be motionless, as friction between the ground and the chopper means it doesn’t need an anti-torque system to prevent it from spinning around.

“There’s no risk of anybody getting injured from a rotating blade,” says Eric Sinusas, the program director for the new tech, which Bell calls Electrically Distributed Anti-Torque, or EDAT. They refer to the new helicopter as the EDAT demonstrator.

Conventional spinning tail rotors are a real hazard: If a person and tail rotor make contact, it’s horrifyingly bad. For example, in 1994, in Alaska, a logging equipment manager perished after he “walked directly into the tail rotor,” a CDC report notes. A lieutenant in the Navy died in 2018 in a similar manner, with a Marine helicopter. One analysis of injuries and deaths from helicopter blade strikes in the Army published in 1993 found that 50 percent of the incidents happened as a result of the top rotor, implying that the other half came from the tail.

The electric tail fans on this EDAT machine are enclosed in ducts, and in helicopter parlance, those features are called fenestrons. European aerospace company Airbus has a long history of putting them in its choppers’ tails, dating back to 1968. In fact, the word fenestron has its roots in a Provencal French word meaning “small window,” as this video explains. The little window that encloses the tail rotor adds an element of safety, hopefully making it harder for someone to just walk into one, or for a spinning rotor to smack into terrain in an accident.

There are more tricks in the tail of this Bell creation, with its four electric fans in four tiny windows. A regular rotor varies how much thrust it’s producing—whether it’s enclosed in a fenestron or not—by changing the angle of those spinning blades. But the blades on the EDAT don’t move that way, making them mechanically simpler. “Thrust is controlled by simply speeding up or slowing down—or even reversing direction—of the motors,” Sinusas says. That’s something a regular chopper’s tail rotor can’t do.

The fact that this chopper can change the speed of its tail fans, or even shut them off sometimes, has implications for how loud it is. The slower you run them, the quieter they are. “The speed at which the tips and blades are traversing through the air is the main driver for noise,” Sinusas explains. And somewhat counterintuitively, the tail rotor can even be louder than the main rotor on smaller helicopters, according to Sinusas.

On the EDAT, sometimes those tail fans will need to be spinning fast, producing tons of thrust, but they don’t always need to be buzzing at their max RPMs. On those occasions, the machine will be quieter. Surprisingly, the fans can be totally motionless when the helicopter is flying forward at a specific speed: aerodynamic forces produced by the chopper’s vertical tail fin provide the anti-torque it needs, keeping the craft from spinning around. “It is significantly quieter than a convention tail rotor,” Sinusas says.

A quieter helicopter with a tail less likely to chop into people has obvious benefits, but systems like this could also represent waypoints towards a future where people fly around cities in air taxis that are partially or fully electric. And in that future, the craft will ideally be quiet and safe (and maybe even have some level of autonomy). Bell is working on a separate electric taxi concept, called the Nexus 4EX, but other companies have been too, among them Boeing and Lilium.

“There’s a lot of hype on fully electric aircraft,” Sinusas says. “It’s clear that EDAT naturally is going to be a stepping stone.”

This stepping stone first lifted off the ground in May of last year, and since then has been flying, he says, “very successfully.”