From The Archives: Stealth Flight Comes Into View

Looking back at the first invisible bombers 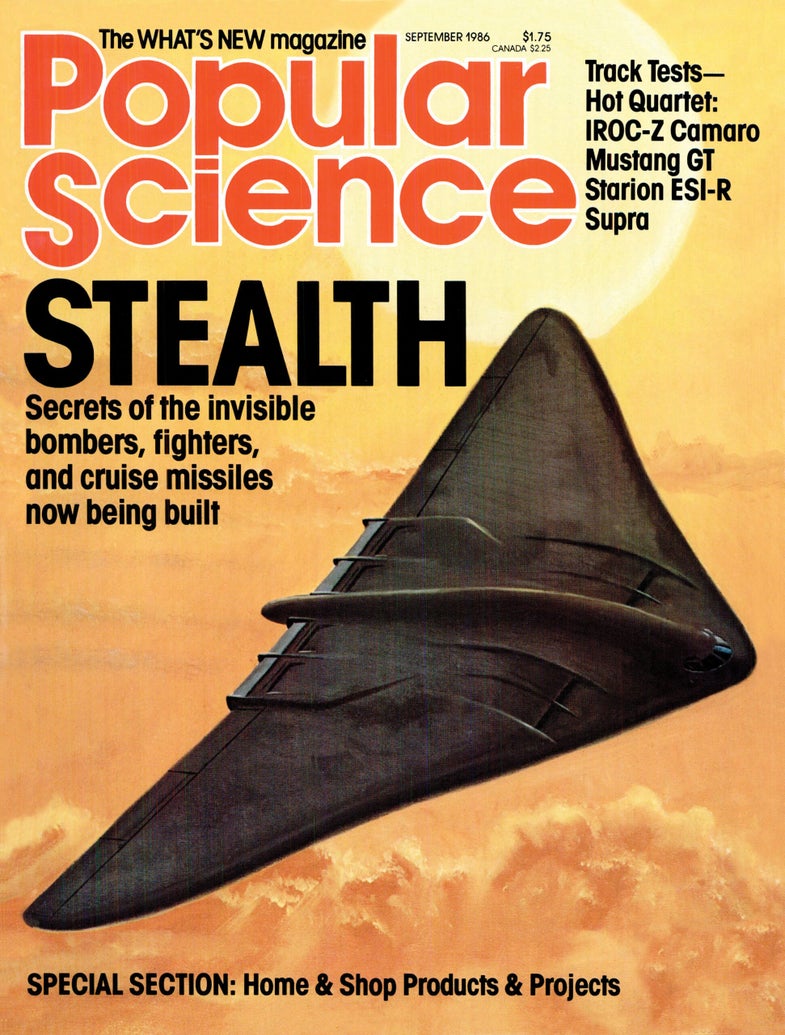 When Popular Science featured the Advanced Technology Bomber (ATB) on the September 1986 cover, we could only guess at what the burgeoning United States stealth air force would look like. Stealth technology was in its adolescence, and the highly classified first prototype of the ATB was still under construction.

“To those outside the black curtain of Pentagon secrecy, making out the stealth picture is like assembling a jigsaw puzzle with only 10 percent of the pieces,” the story reads.

In the 1980s, the jigsaw pieces we had to work with were older, less-clandestine bombers and known forms of cloaking technology. In 1943, the Germans were the first to attempt—and fail—to create a virtually invisible, soundless, and trace-less plane, the Horten Ho 229. Allied troops seized it at the end of World War II, before it ever flew a mission. The dream of a stealth plane lived on and was invigorated by the Cold War. Stealth aircraft would give the U.S. military an advantage over its biggest threats at the time: the Soviet Union and China.

Engineers could hide planes from the naked eye and ear with relative ease, but radar invisibility was an imperfect art. The right combination of fuselage angles and materials could misdirect or absorb all radar pings. The ATB we imagined in 1986 was in a “flying wing” form, similar to the Horton Ho 229. Flying-wing planes, shaped like deltas, were ideal for stealth because of their thin radar cross sections. In addition to minimizing the surface area for radar to target, it was important to add curves. Just as a bouncy ball ricochets unpredictably off an angled surface, a stealthy aircraft needs to return radar signals in the wrong direction. Popular Science also speculated the ATB would be constructed from layers of radar-absorbing materials such as ferrite tiles and carbon-fiber epoxies to hide its metal inner workings.

Seven years after that 1986 cover story, the ATB program unveiled the Northrop B-2 Spirit, also known simply as the Stealth Bomber. On the outside, it looks similar to the velvet-black flying wing we had envisioned, and in a lot of ways it reflects our predictions, even down to the carbon-composite construction and special paints. However, by the time the B-2 was revealed to the public, it had already fallen behind in the rapidly changing world of stealth technology. The materials side of the industry, in particular, is in a constant state of flux, experimenting with innovations like carbon nanotube paint and cenospheres to decrease the radar presence of stealth aircraft. Even these radar-cloaking techniques may be rendered obsolete one day. In 2012, scientists from the University of Rochester in New York demonstrated a way to use the quantum properties of photons to create a reportedly unjammable aircraft detection system.

Drone warfare has risen to prominence as the nature of the enemy has changed. Read our January 2015 cover story, “Inside The New Stealth Arsenal“, to find out how technology continues to evolve in order to cloak supersized- and super-stealthy drones. Plus, learn how to pilot your own drone.

This article was originally published in the January 2015 issue of Popular Science, under the title “Stealth Flight Comes Into View.” It has been expanded for the web.