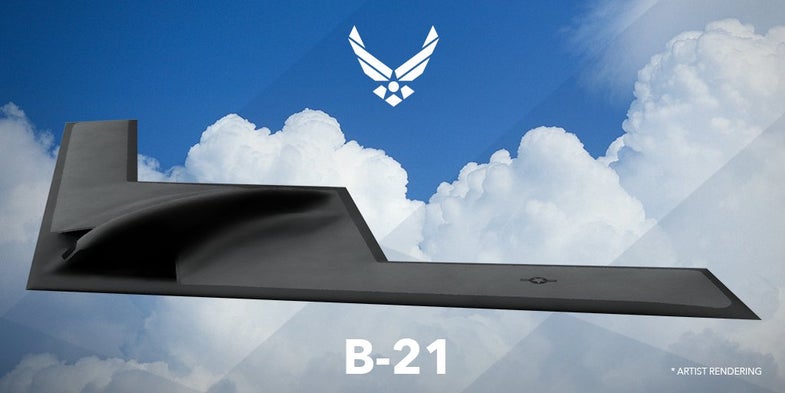 Airplanes gestate in the Pentagon for a long time. The United States Air Force first conceived of its next generation bomber in 2004. Known as the Long Range Strike Bomber for much of its development, it finally got a number (if not a name) as the B-21 last October. Last week, Congress published its official report on the bomber. Here’s the best parts of it.

Stealth technology is complicated, and hardly any members of Congress come in with technical backgrounds. So the report explains how stealth works, and why it matters, pretty clearly, like this:

The definition also notes that this would be America’s fifth stealth warplane, and it’s design would draw on lessons from the F-117, F-22, and F-35 fighters, as well as the B-2 bomber. This is as clear and functional a definition as one could hope for, which is good because it may be all a representative sees before voting to fund the plane. At the very least, it should head-off any questions about why the plane can’t be both supersonic like the B-1 while being stealthy like the B-2.

In recent times, airplanes can take 20 or so years to go from design to combat-ready. The design of the B-21, so far only seen in concept art, resembles the Air Force’s last new bomber, the B-2 Spirit. The Spirit felt futuristic when it debuted in the early 1990s, and much of its design is still cutting-edge in 2016. With the B-21, there’s not much of the stealthy flying wing that needs reinventing, and existing systems can be adapted to the plane, rather than built from scratch. That means the Air Force expects the plane to be ready in 10 years. That’s a long time for most technology, but fast by modern warplane design standards.

It’s Coming, But At An Unknown Cost

The B-21 isn’t just a stealthy bomber, it’s one whose funding itself is coated in secrecy. The project is currently estimating 100 new bombers at $550 million each, but there aren’t great public numbers on the cost because much of the development and its funding is classified. The F-35 program, the Pentagon’s major new fighter, was $163 billion over budget last summer, and it’s very easy for programs like this to creep up in cost. Yet we might not even know how much over budget it is until more information about the plane itself is public.

There’s also a debate in the design of the plane itself: It’s more expensive for B-21s to carry nukes, but they’re also replacing a lot of nuclear-capable bombers, and the Air Force is eager to keep nuclear weapons as an option for the plane.

There’s a lot more about the bomber to come, and as a major Air Force program, Congress will likely debate it for decades.