Depiction vs. Reality: The Air Force Hardware of Transformers: Revenge of the Fallen

If you’re seeing Transformers: Revenge of the Fallen tonight, prepare yourself for a parade of hardcore military hardware unlike any...

If you’re seeing Transformers: Revenge of the Fallen tonight, prepare yourself for a parade of hardcore military hardware unlike any you’ve ever seen. As was the case with the first Transformers film, the U.S. Air Force Entertainment Liaison Office played a significant role in assisting with and supervising the placement of military gear.

But what happens when the F-22 Raptor–a weapons system in jeopardy of being canceled entirely–plays a central role in the film, while unmanned drones are flying nearly constant missions over Iraq, Afghanistan and Pakistan? We talked to the USAF Entertainment Liaison Office to find out.

Transformers: Revenge of the Fallen’s list of featured Air Force hardware includes the F-16 fighter jet, E-3 AWACS command and control aircraft, the A-10 tank-killer, B-1 bombers, and the T-38 supersonic jet trainer. And of course there’s the $200 million-dollar F-22 Raptor, an air superiority fighter with stealth capability.

The franchise is also, undoubtedly, the first time a modern military aircraft has played a featured speaking role. An F-22, filmed flying over Transformers sets at Holloman Air Force Base and the Army’s White Sands Missile Range in New Mexico, plays the alternate form of Starscream, a Decepticon Transformer and one of the movie’s robot baddies. The irony of which is almost too perfect to believe–the Obama administration has expressed strong interest in sharply downsizing or canceling the F-22 program altogether, although the House Armed Services committee just last week approved (by a 31 to 30 vote) plans to build 12 more F-22s–eight more than recommended by Defense Secretary Robert Gates in his 2010 budget. Opponents of the expensive F-22 program feel the money would be better served fulfilling the increased demand, for more Predators, Reapers and other aerial drones. 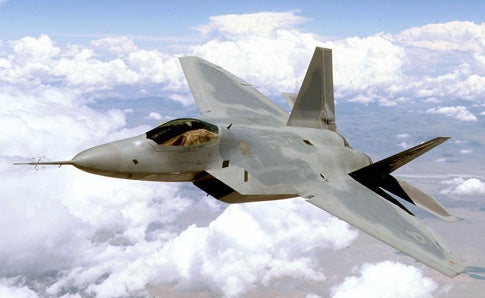 Drones did, in fact, have their first big screen debut in the 2008 movie Eagle Eye which stars Transformers lead Shia LeBeouf as yet another geek fighting a dangerous artificial intelligence construct run amok. MQ-9 Reapers from Creech Air Force Base in Nevada were on hand for that movie, McGarry noted.

The Reapers acted as the long arm of the renegade AI chasing down LeBeouf’s character. Yet the Air Force approved this depiction of its unmanned aerial system (UAS)–because besides, Eagle Eye also included Rosario Dawson playing an Air Force agent from the Office of Special Investigations.

“Since the renegade AI’s ability to commandeer varied technology was integral to the story, it was deemed an acceptable portrayal of the UAS in that specific story line,” McGarry explained.

This does not mean that moviegoers will necessarily see many drones in near-future films. Filmmakers still crave access to the pilots and planes which have given the Air Force its gallant image, whether it’s flying against Transformers or killer robots in another recent summer movie, Terminator: Salvation.

And in the end, it simply comes down to age-old Hollywood aesthetics.

“When you see a wide-angle shot of F-22s or hear the real sound of them flying by or rolling in on a target, there’s no substitute,” McGarry said. He helped coordinate Air Force resources with the wish lists of Transformers filmmakers, such as timing F-16 training flights with the movie’s shooting schedule. For arrangements outside the usual military training, filmmakers paid the hourly operating cost of the Air Force equipment.

Beyond the hardware, filmmakers also value the face-time with real Air Force pilots and personnel in order to get the human stories and interactions right. McGarry had been on the set of an earlier movie for three days when director Michael Bay turned to him and asked what an Air Force character representing top brass might say in a certain scene. Capturing the realism of a UAV remote-piloting facility in the middle of the U.S. desert is, not surprisingly, lower on most summer blockbuster directors’ wishlists.

Essentially, if directors want to use the Air Force’s toys for a movie, they have to play by the Entertainment Liaison Office’s rules. And since the Michael Bays of the world clearly favor the more traditional, personal Air Force in their films, this has been a win-win situation both for the directors and an Air Force interested in maintaining some aspects of this perception. Even as F-16 Fighting Falcons flash across the screen in Transformers, back in the real world, squadrons of Air Force National Guard F-16 pilots are being actively retrained to fly Reaper drones instead.

Echoes of this transition from manned to unmanned are also found in the 2008 movie Iron Man where the fictional Colonel James “Rhodey” Rhodes opines on the future of air combat by suggesting that “no unmanned aerial vehicle will ever trump a pilot’s instinct.” That movie features F-22 Raptors (again!) dueling with the flight-capable Iron Man.

McGarry, however, is in fact quite open to cooperating with a film prominently featuring UAVs (see: Eagle Eye)–he just hasn’t seen many scripts asking for it. He said that he has not seen any similar “Rhodey”-like sentiments in his script read-through of the upcoming Iron Man sequel. He recently helped coordinate Iron Man 2 scenes shot at Edwards Air Force Base in California, described as a “veritable grocery store” of the latest Air Force hardware undergoing final testing before deployment.

As for how Iron Man 2 will choose to depict that new Air Force, “you’ll have to wait and see,” McGarry said.