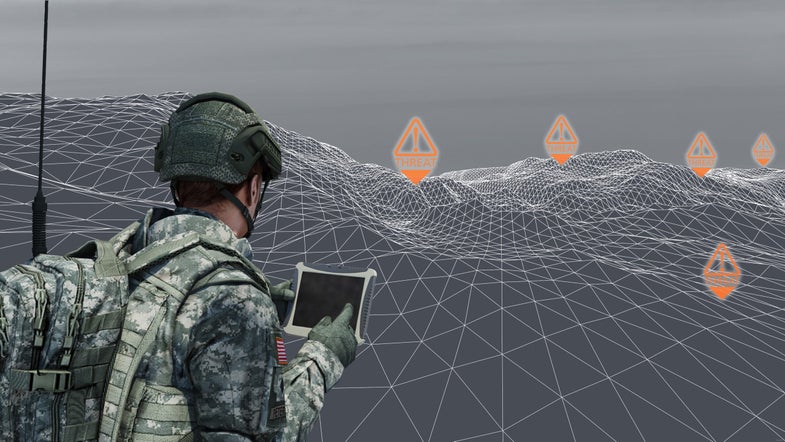 With a hand-held device, a soldier can see where enemy signals are coming from, stretched out on a low-resolution virtual plane. BAE
SHARE

Radar used to be a slow science. Electronic warfare is a blanket term that encompasses the radar signals used to detect an attack, the radios used to communicate that the attack is coming, and the specific radio interference sent to confuse enemy radars as they’re attacking. And in the Cold War, every part of this used to be analog.

“In Vietnam we learned what an SA-2 radar signal started looking like,” Joshua Niedzwiecki, director of the Sensor Processing and Exploitation group at BAE Systems, tells Popular Science. The SA-2 is a surface to air missile that destroyed a lot of U.S. Air Force planes, especially B-52 bombers, over Vietnam. “The paradigm then was we saw a new signal in an environment and got a lot of experts and put them in a room in a laboratory and had them start to dissect what those characteristics were, in order to build a prescription for a solution, what’s that antidote. That process took months.”

Niedzwiecki works for BAE Systems, American counterpart to the British defense giant, and we are speaking today because of a new technology that came from BAE’s research and transformed into something called “Cognitive Electronic Warfare.” I’ll get to the specifics of that in just a minute, but in order to understand the breakthrough, it’s helpful to understand the past.

“The current paradigm is extremely time-consuming, extremely cumbersome, and in the past, this was acceptable because the radio frequency technology was very static. Everything was analog hardware. If I built a radar system, all the things that make that signal look like it looks, were driven by analog components,” Niedzwiecki continued. “So they weren’t prone to change for years. Nowadays, you see radar that on every single radar pulse can change what operating frequency they’re working at, what their pulse width is, what their bandwidth is, because of digital processing technology and software-defined radios. By the time you’ve gone back to the lab to study what you saw, the threat is different, by the time you come back from your mission, the threat is different.”

The threat in electronic warfare is manifold. A hostile radar can guide missile after missile at incoming aircraft. A jammer that interferes with GPS can keep bombs from falling where they’re supposed to, or get troops lost on the ground. A strong signal at the right frequency can interfere with soldier’s radios, leaving them suddenly cut off from commanders and friends. On its own this is frustrating; but combined with the other, lethal parts of war (“kinetics”, in Pentagon jargon), what happens in the electromagnetic spectrum can shape battles.

This morning, BAE revealed a “lightweight, handheld tactical sensor” for cognitive electronic warfare. Developed for DARPA, the sensor is designed for soldiers and marines to carry into battle, where it will identify and classify new signals. In the previous, Cold War-era approach, American troops went into battle knowing only signals already identified, and after detecting a new signal, it would take months to have a response. Many systems, even ones that already had signals recorded in peacetime, can, according to Niedzwiecki, “have a “war reserve” mode, a waveform signature that we may not have seen before,” so there’s now guarantee that adapting to an old signal will protect against the signals that replace it.

Cognitive electronic warfare takes the burden of deciphering and countering new signals out of human minds in a lab, and entrusts it instead to AI and machine learning. If the cognitive system sees a signal similar to one it has seen before, it can respond accordingly. If the interference makes the radio signal weak, then the cognitive system might just put more power into the same radio signal. If the jamming makes some parts of the spectrum unworkable, then the cognitive system could look for a part of the spectrum that’s still open for communication, and redirect signals there. If the approach works, as captured by bit-error rate, the system learns and remembers. If it doesn’t, the cognitive system can try a different approach, changing up its response until something gets through.

Not every cognitive electronic warfare system can do all of this; the more adaptive and responsive ones will require the kind of power provided by an airplane, or a ship. As for the soldier on the ground with the handheld device? “If I’m a tactical soldier, maybe I’m trying to detect and locate certain enemy signals or understand where and how the enemy is communicating in that tactical battlespace,” says Niedzwiecki.

“This technology allows me to make better sense of what signals are in that electromagnetic spectrum and how they’re being used to better inform my tactical maneuvers.”