Inside America’s Next Spyplane

A secret, hypersonic replacement for the legendary SR-71 promises to transform military aviation Born in the spy-vs.-spy cauldron of the Cold War, the iconic SR-71 “Blackbird” remains the fastest air-breathing military aircraft the world has known. It flew so high and so fast that enemy defenses were powerless to intercept it. Eventually, satellite technology and advanced radar eroded its advantage. In 1998, the U.S. Air Force retired it. Now, with regional threats growing and portable surface-to-air missiles evolving, engineers have once again set out to build the fastest military jet on the planet.

This time, it will take the form of a 4,000-mile-per-hour reconnaissance drone with strike capability. Known as the SR-72, the aircraft will evade assault, take spy photos, and attack targets at speeds of up to Mach 6. That’s twice as fast as its predecessor.

Aeronautical engineers at Lockheed Martin and Aerojet Rocket­dyne have been designing the SR-72 at their Skunk Works black site in California for the past several years. It will require a hybrid propulsion system: a conventional, off-the-shelf turbo jet that can take the plane from runway to Mach 3, and a hypersonic ramjet/scramjet that will push it the rest of the way. Its body will have to withstand the extreme heat of hypersonic flight, when air friction alone could melt steel. Its bombs will have to hit targets from possibly 80,000 feet. Lockheed says the craft could be deployed by 2030. Once it is, the plane’s ability to cover one mile per second means it could reach any location on any continent in an hour—not that you’ll see it coming.

“We are now on the verge of a hypersonic revolution.”

Ramjets forgo the big rotary compressors needed on turbojets and instead rely on their own forward motion to compress air. First, air is scooped into an inlet and compressed as it funnels into a diffuser. The diffuser also slows the air to subsonic speeds for easier combustion. From there, air and fuel are fed into a combustion chamber and ignited. Finally, an exhaust nozzle accelerates the resulting burst of hot, expanding air, producing massive thrust.

Turbojet engines can take a plane from runway launch to about Mach 3; speeds faster than that require an air-breathing ramjet, which compresses high-speed air for combustion, but which typically begins operating at about Mach 4. To bridge the gap, engineers are developing a hybrid engine that can operate in three modes. The aircraft will accelerate to about Mach 3 under turbojet power, switch to ramjet power to take it to about Mach 5, and then switch again to scramjet mode, which uses supersonic air for combustion.

It could reach any location on any continent in an hour—not that you’ll see it coming.

Aerodynamic friction at speeds exceeding Mach 5 will heat an aircraft’s exterior to 2,000 degrees. At that point, conventional steel airframes will melt. So engineers are looking at composites—the same kinds of high-performance carbon, ceramic, and metal mixes used for the noses of intercontinental ballistic missiles and space shuttles. Every joint and seam must be sealed: Any air leak at hypersonic speed, and the in-rushing heat would cause the aircraft to collapse. (That’s what doomed the space shuttle Columbia).

Lockheed describes the SR-72 as an intelligence, surveillance, reconnaissance, and strike platform, but its exact payload is secret. Most likely, it hasn’t yet been invented. Taking spy photos or dropping bombs at Mach 6 will require extraordinary engineering. It will require hundreds of miles to make a turn. It will need powerful guidance computers to line up targets, 80,000 feet below. Also, you can’t just open a bomb bay at 4,000 miles per hour. The SR-72 will need new sensors and weapons to operate at such high speeds.­­

3D PRINT YOUR OWN 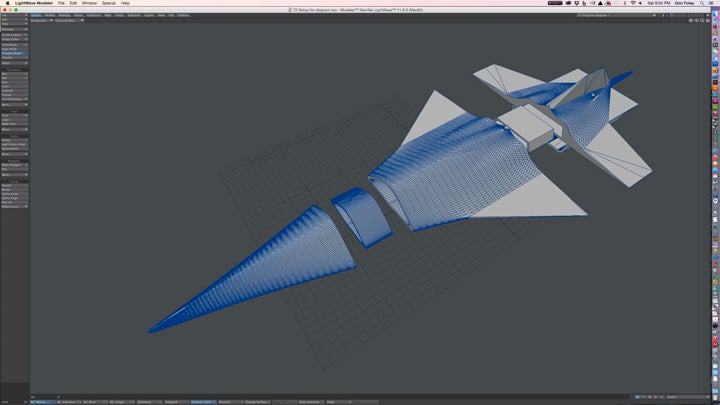 Computer Model Of The SR-72

Popular Science illustrator Don Foley has turned his drawings into 3D-printable models. Check them out here.

This article was originally published in the June 2015 issue of Popular Science, under the title “America’s Next Spyplane.”