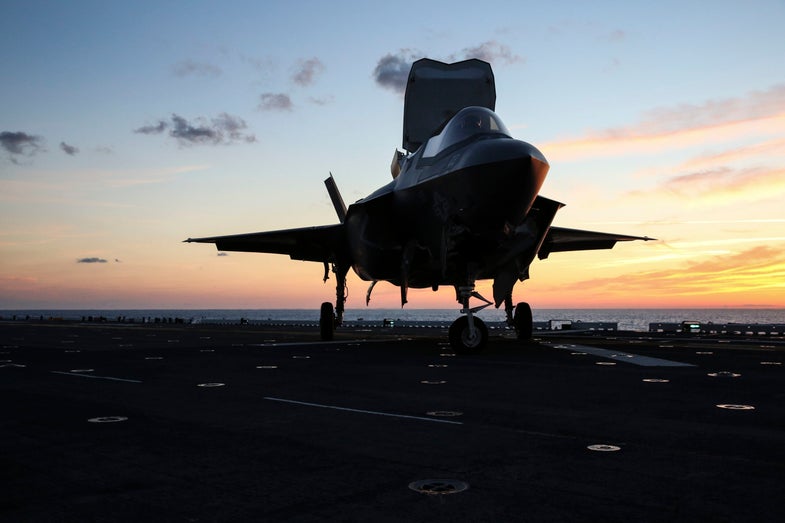 Today the United States Marine Corps declared the F-35B “operational.” Costing between $1.04 billion and $1.34 billion, depending on who’s doing the estimating, a 10-plane squadron is the first unit of F-35s the military feels comfortable saying its ready. It’s a major milestone for one of the longest-running and most expensive programs in the Pentagon’s history. Oh, and it means America now has a new fighter that can do bunny hops like this:

The F-35B is one of three variants of the fighter. Designed to replace the Marine’s aging fleet of Harrier Jump Jets, it can take off from short distances and even land vertically. That’s technically impressive, though it didn’t come without cost. In 1994, the unit price of the plane was estimated at just $35 million. In 2014 dollars, that’s $56 million, which is just over half the price $104 million unit price the F-35 maker Lockheed states today. It’s much less than the $134 million figure Lieutenant General Chris Bogdan, the head of the F-35 joint program office, provided in March. Government Accountability Office figures reflect a similar trend, with the plane’s unit price climbing from $69 million in 2001 to a peak of $137 million in 2013, before declining slightly.

Indeed, when the Joint Strike Fighter contract award was announced in 2001, the value of the contract was estimated to be in excess of $200 billion. In April, the GAO estimated it at $400 billion for acquisition alone, with a lifetime cost of $1 trillion for the program. The Pentagon estimated the cost of the cheapest F-35 version at $40 million, and the Marine version at under $50 million. That same press conference estimated an initial fleet of 465 fighters, with the first operational in 2008.

Seven years later, with a program that has quintupled in cost, the Pentagon currently plans a total fleet of 2,443 F-35s, though that number may decrease.

In a statement emailed to reporters by F-35 maker Lockheed Martin, they quote Lieutenant General Jon Davis, the Deputy Commandant for Aviation of the Marine Corps, as saying: “The squadron’s aircraft performed well in all five IOC operational scenarios: Close Air Support, Air Interdiction, Armed Reconnaissance, Offensive Counter Air and Defensive Counter Air. This included live ordnance deliveries.” Translated out of the jargon of defense bureaucrats, it means that in tests the F-35B put explosives on targets, and did the multiple jobs expected of the plane.

The Marine version of the F-35 is the first declared operational, with the Air Force variant expected next year and the Navy version later this decade. Because it’s operational, it is technically possible that the F-35 could be sent to the middle east to fight against ISIS, but that’s unlikely for a while at least. After all, the F-35 is first and foremost a highly advanced stealth fighter. Despite what it’s proponents might say, it wasn’t built to fight ISIS.