Refueling fighter jets mid-flight is complex, but new tech from Airbus could simplify the process

Everything you ever wanted to know about how planes take on more fuel as they fly. 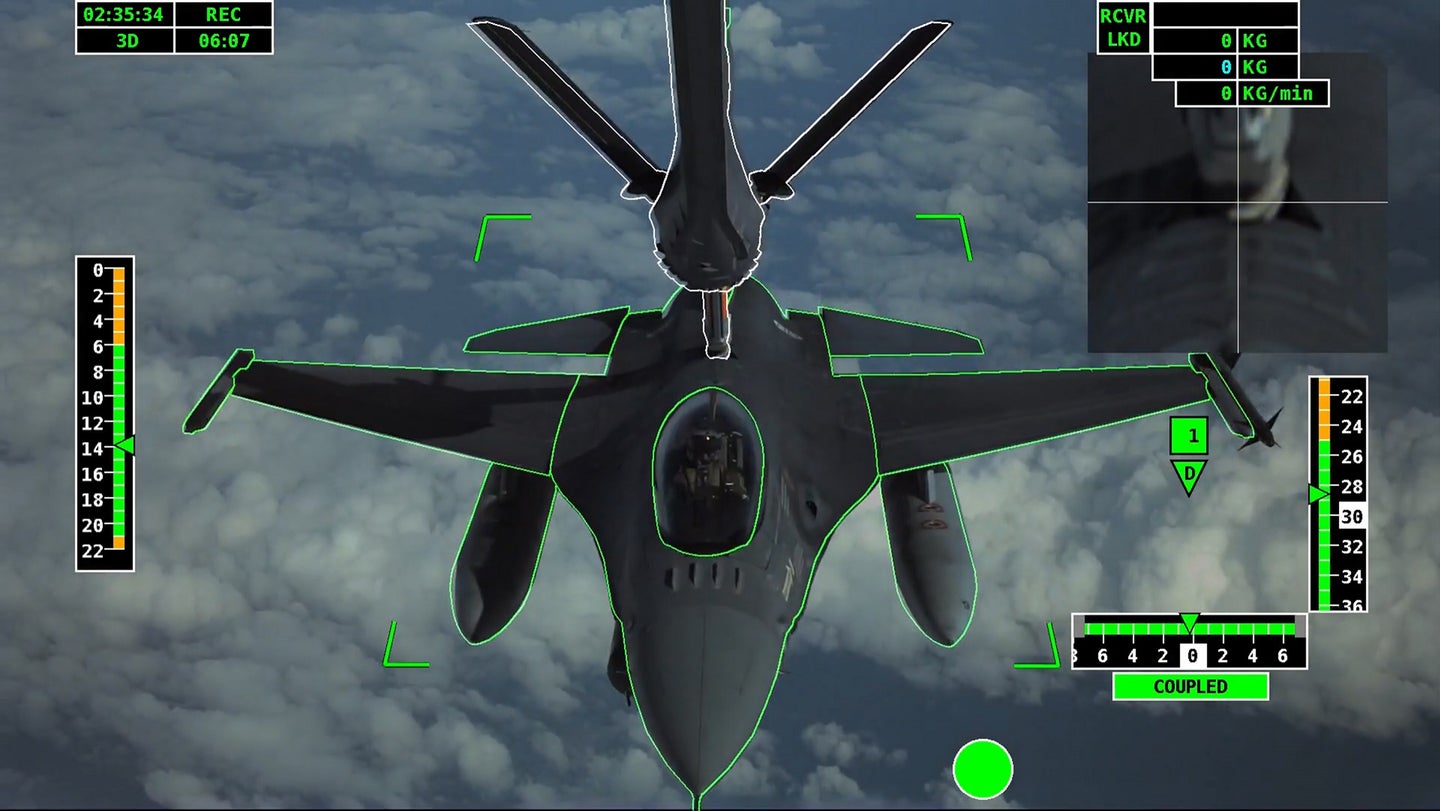 Imagine filling your car with gasoline as you’re cruising down the highway. Oh, and the fuel is flowing from a tanker truck speeding in front of you. That’s something like what combat pilots have to contend with when refueling while airborne.

The maneuver is known as air-to-air refueling (AAR), in-flight refueling, or even just tanking. It plays a vital role in extending the range of fighter planes, and it saves air forces precious time by enabling their planes to cover vast distances without needing to land in possibly unfriendly countries. In the 1990 Gulf War, for example, F-15 fighter jets flew 14-hours non-stop from Virginia to Kuwait—with seven AARs en-route!

And just recently, Airbus announced that it had completed, for the first time, a step towards “automatic” air refueling—more on that breakthrough down below.

The exercise has a colorful history. The first airborne refueling occurred in 1921 between two biplanes. With a five-gallon fuel canister and at an altitude of some 1,000 feet, Wesley May worked his way down the right wing of a plane flown by Frank Hawks; he then climbed onto the left wing of another plane and eventually poured the fuel into its gas tank. Although an impressive stunt, it did obviously not represent a practical way to refuel while airborne. So, on June 27, 1923, the US Army Air Service used two Airco DH-4B biplanes to try out a less extreme approach. The refueling aircraft released a fueling hose that did the deed.

That hose idea has stayed with us. It’s known today as the “probe-and-drogue” system, and it was originally developed by Sir Alan Cobham in the United Kingdom in 1950. The hose now has a basket (the drogue, which is shaped something like a bowl) on the end, and the combat aircraft has a probe, which is retractable except on the French-made Rafale and Mirage fighters. That probe locks into the drogue so that fuel can transfer. Up to 420 gallons of fuel per minute can flow to two aircraft simultaneously, as the hoses are at the ends of the tanker’s wings. With this system, the onus is on the pilot of the plane accepting the fuel; they have to manipulate the craft so that the probe enters the drogue.

Boeing invented another system—the flying boom—in the 1940s. Instead of a flexible hose, it involves a telescoping tube. For example, on the Airbus A330 MRTT (that stands for Multi Role Tanker Transport), this boom, attached to the underside of the tail, is 38 ft long when retracted and 60 ft long when fully extended. The boom has two small wings on it, and these help the operator control it and place it into the fuel tank—a port on top of the receiver aircraft. The method can transfer up to 1,200 gallons of fuel per minute. With this system the workload lies more with the boom operator.

The first aircraft equipped with a boom was the Boeing B-29 Superfortress, re-designated the KB-29P. This led to the development of the first production jet tanker, the KC-135. On US aircraft a “K” (for “kerosene”) indicates a tanker aircraft, while a “C” (cargo) is a transport plane. The last KC-135 entered the U.S. Air Force in 1965 and today nearly 500 are still in service. They are to be partially replaced by the Boeing KC-46 Pegasus—except that this program has ratcheted up five Category 1 problems, meaning the aircraft cannot perform one or more of its core missions. The latest of those problems, announced by the U.S. Air Force at the end of March, is that the fueling system leaks.

Both the KC-46 and Airbus’s MRTT carry their fuel in multiple tanks in the cargo hold and wings. They can both offload fuel by boom, or by hose-and-drogue. The KC-46 carries a total 212,000 pounds of fuel and the MRTT holds 250,000. (Obviously they need fuel themselves so cannot offload that entire amount.) Airbus says that a MRTT loitering for four hours at 1,150 miles from take-off can offload 110,000 pounds of fuel. This means that, theoretically, it could refuel about 15 single-engine aircraft such as an F-16, which holds about 7,000 pounds.

When refueling fast jets (helicopters and propeller aircraft can also be refueled in the air) both tanker and receiver would be flying at between 288-345 mph and at an altitude between 20,000 to 30,000 feet. Weather also plays a role, and pilots might choose a different altitude to avoid turbulence or poor visibility.

Refueling is planned hours before take off and pilots know where the tanker will be loitering. “The rendezvous time for fighters and tanker are well-known in advance and if nothing major occurs they will be performed at that time and place independently of the exact amount [of fuel] left in the tanks,” Ivan Garcia Ferreiros, A330 MRTT Product Marketing manager, says by email.

The rendezvous is fixed not by flying time or distance but by minimum fuel—known as “bingo” fuel—needed to reach the nearest airport. The AAR always takes place before reaching bingo fuel, allowing time to approach the tanker and perform the contact maneuvers. In an emergency, a pilot can request an unscheduled refueling.

Although pilots and boom operators undergo rigorous refueling training, it nevertheless remains stressful. To that end, both Airbus and Boeing have worked on automatizing the boom operation. Peter Thomas, senior lecturer in Aerospace Engineering at the University of Hertfordshire in England, and a specialist on air-to-air refueling of unmanned aerial vehicles, says that “if you want to automate the system you must outperform what a human can do, which is using his eyes to gage where the boom must go and couple up with the receiver.”

This is what Airbus has achieved, announcing in mid-April that earlier this year it had successfully completed the world’s first fully automatic air-to-air refueling operation with 120 dry fueling contacts with a Portuguese Air Force F-16 fighter jet which needed no modifications at all to use the system. (A dry contact means they don’t actually transfer fuel.)

The tech allows the boom operator to simply activate the system and then supervise while the computer takes control of the boom, maintaining the right angle and distance to fly it to within centimeters of the receiver aircraft. The boom’s telescope is then extended into the receiver, the fuel transferred, then automatically disconnected and the boom brought away.

It’s easy to wonder what would happen if there was a problem during an in-flight refueling, whether it’s automated or not. But surprisingly, things don’t often go wrong, and there have been remarkably few serious accidents.

The Palomares incident in Spain involving a B-52 and a KC-135 is probably the most dramatic. In 1966, a US Air Force B-52 carrying four unarmed hydrogen bombs crashed into its tanker 31,000 feet. Both aircraft were lost and seven people were killed in the accident. One bomb was recovered from a depth of 2,900 feet in the Mediterranean; the other three landed near Palomares, Spain, two of them detonating and scattering plutonium around the area.

In a more recent 2018 tragedy, a Marine F/A-18 Hornet collided with its tanker near Japan. Six people perished.