What it’s like to eject out of a military jet

A complex explosive sequence propels pilots out of doomed planes. 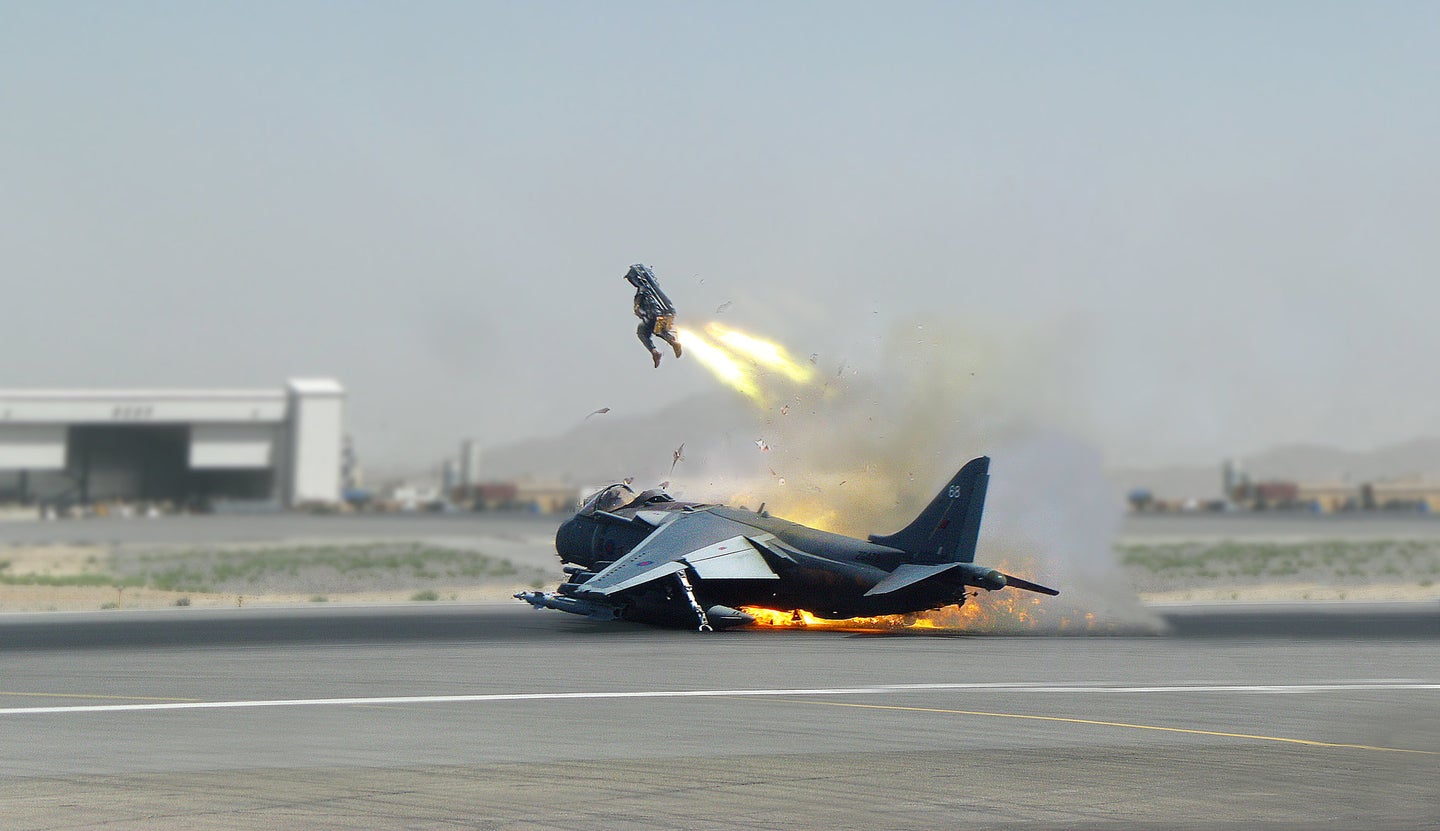 A pilot ejects from a Harrier jet in Afghanistan in 2009. Courtesy Martin-Baker
SHARE

When things go terribly wrong in a military aircraft, the pilot’s last resort is the equipment they’re sitting on: the seat. And it cannot fail, ever.

The 200-lb ejection seat, with its 3,500 or so parts, is a remarkable piece of technology that not only gets pilots out of a crashing plane but also ensures they survive the experience more or less unscathed. If the pilot ejects above 16,400 feet where oxygen is scarce, sensors on the chair will let it free-fall to get its occupant down to breathable air as fast as possible, and only then will the parachute open.

British company Martin-Baker, and its French partner Safran Martin-Baker France, control 56 percent of the world’s ejection seat market. Their seats equip the aircraft of 93 air forces worldwide, including the US’s F-35 Joint Strike Fighter, the French-made Rafale, and the Eurofighter. Other major ejection seat manufacturers are American company Collins Aerospace (whose newest seat is the ACES 5) and Russian outfits NPP Zvezda and AO. All told, ejection seats have saved an estimated 12 to 13,000 lives since the mid-1940s.

Martin-Baker’s latest major in-service seat is the Mk16. Here’s how it works.

When the pilot pulls the yellow and black loop handle on the seat at knee level, that sets off an astonishing chain reaction that begins with three very quick sequential explosions. Seats designed 30 years earlier had just one ballistic explosion, the force of which crushed the pilot with 20 Gs or more (that’s 20 times your bodyweight pushing down on you). Today, the ejectee will “only” suffer from 18 Gs—still an enormous amount of force that would cause anyone to pass out if it were sustained. (Pilots flying fighter jets must cope with high G forces as they maneuver, even when not ejecting.)

Pulling the handle fires the ejection gun for .2 seconds, starting the ejection at 50-55 feet per second. Simultaneously the aircraft’s glass canopy either shatters, is blown off, or the seat breaks through it, depending on the aircraft model. The rocket motor then fires for .2 seconds with a 5,000 pound thrust, and then a top-mounted side rocket fires for .05 seconds at a thrust of 584 pounds. This side rocket (located to the left of the front seat, and the right of the back one for aircraft with two crew members) ensures the two ejectees hurtle different directions with the person in the back seat always ejecting first, to avoid being burned by the front seat rocket.

Straps tighten around the pilots’ arms and legs and an emergency oxygen supply is released. Then a drogue parachute at the back of the 214-pound seat opens. At the same time two small panels about 16 inches long and 8 inches wide open up on either side of the seat to keep it straight. And all of this happens in 1.35 seconds!

Then the small box at the top of the seat, which contains the main parachute (harnessed to the pilot) lifts away from the seat, the drogue parachute drops off and, as the main parachute opens, the pilot and the seat shell part company—apart from a section under the butt that contains the survival kit and a raft, which automatically inflates in water. These hang underneath the ejectee, deploying just 5.5 seconds after they’ve pulled the ejection handle.

In addition, the Mk16 seats designed specifically for the F-35 Joint Strike Fighter program have a 3-part airbag system, known as the Neck Protection Device (NPD). Steve Roberts, head of business development at Martin-Baker, says that the new Helmet Mounted Displays worn by the F-35 pilots are larger and heavier than previous ones, and their center of gravity is forward of their head axis—factors which increase the risk of neck injuries during ejection.

To counter this, two side air bags inflate just after the ejection handle has been pulled to stop the head from moving sideways. Then the third air bag, mounted directly behind the helmet, inflates. “The combination of the three air-beams act as a ‘pitcher’s mitt’ that supports the helmeted head to reduce the inertial loads applied to the neck,” Roberts says. Once the main parachute is deployed, those bags automatically deflate. In addition, this seat has an automatic arm restraint, rather than the passive one that features on previous ejection seats, to stop pilot arms from flailing during the ejection.

The Mk16 seat for the F-35 also has a “lightweight crew switch” which the company added when tests showed that lightweight pilots wearing the new, heavier helmets ran a slight risk of breaking their necks during ejection. “One of the first things the pilot will see when they climb aboard is a toggle switch which indicates ‘normal’ or ‘light.’’ If they’re in the ‘light’ category they choose that and it adds a few fractions of a second to the ejection but means they get a slightly more gentle ride out of the aircraft,” a spokesman for Martin-Baker says.

Ejecting at up to 65,000 feet from an aircraft flying at 700 mph is a violent process. Despite the technology’s progression over the decades, you’re basically sitting on a small chair that has been rocket-propelled out of a malfunctioning aircraft, a parachute opens, you and the seat part company, and you land—hard. Legs may get broken, vertebrae may be compressed.

“It was inconvenient,” one ejectee says, dryly. He was in the backseat of a plane when it collided with a bird in June 1999. “The overhead canopy was smashed and there was blood and gore everywhere,” he recounts. “I didn’t realize it was the bird—I thought it was the pilot and when I looked in front he wasn’t there, so I ejected. I broke five vertebrae and so lost a few centimeters,” he says wryly. In fact the pilot was there, just bent over checking for damage, and later able to land the plane.

Another pilot, Paul Defoucaud, was 23 when he had to eject. “I wasn’t at all stressed, I remember being hyper-lucid,” he recounts.

But a trainee pilot who had to eject after his plane hit a large bird, says: “You are totally out of control when you eject and you drop super fast. I was sure I’d broken something.”

Another encounter with a bird caused Commander Matthew (French armed forces request that no surnames are given for those still in active service) to eject from his Mirage 2000-5. “The only thing I lost was my shoe,” he says, “but the decision to abandon the plane is not one that is easily made. I felt I’d failed,” he says.

Pilots hesitate to pull the ejection seat handle because “we know that we are condemning a multi-million dollar piece of equipment, paid for with taxpayers’ money,” Matthew adds.

Ejectees whose lives have been saved by Martin-Baker seats automatically become members of the Ejection Tie Club. At the induction ceremony during June’s Paris Air Show, French Air Force Captains Charles and Mikaël who ejected on September 28, 2017, from their Mirage 2000N just 200 feet off the ground, told Popular Science that they’d “both pulled on the handle at the same time.” Mikaël, who suffered a triple leg fracture, recounts that “when you eject, the right side of the brain just takes over and the adrenaline is pumping hard. My first thought when I landed was that I would see my kids again.”

A very few are double ejectees. Former French Air Force pilot José-Manuel Souvignet is one. He first ejected as a lieutenant in 1995. “My Mirage 2000 was shot down by the Serbs over Bosnia. We ejected at 3,000 meters [9,843 feet] altitude and 350 knots with our aircraft on fire. We both fell and broke a leg in enemy territory. We were held prisoner for 104 days,” he says, not wishing to elaborate further.

The second time was in 2008, when he was a lieutenant-colonel. “I was flying a Mirage 2000N when the fuel supply cut…. I directed it to a neutral zone and we ejected at 200 feet and 190 knots. The force on landing was as if I’d fallen out of the fourth floor of a building.”

But thanks to this technology he, and thousands of others, have lived to tell the tale.

Editor’s note: This story has been updated since it was first published.