The military’s new wingless plane is set to make its first hypersonic test flight Tuesday, after it is released from... 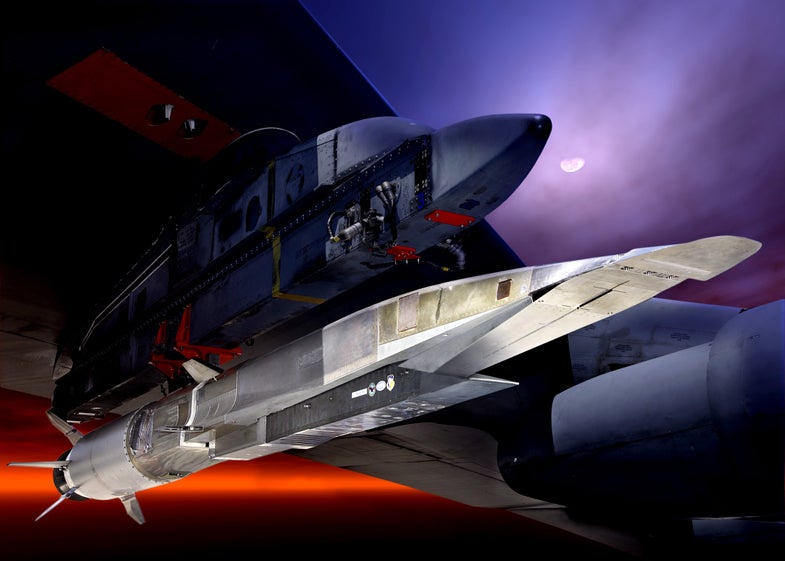 The military’s new wingless plane is set to make its first hypersonic test flight Tuesday, after it is released from a B-52 bomber off the California coast.

The X-51A WaveRider, which sort of resembles a shark, will fly for about five minutes, powered by a scramjet engine. It should reach about Mach 6 and transmit data to ground stations before splashing down in the Pacific Ocean, according to the Air Force Research Laboratory.

The longest previous hypersonic scramjet flight test, performed by a NASA X-43 in 2004, was faster, but lasted only about 10 seconds and used hydrogen fuel. The X-51 uses JP-7 jet fuel, the same juice that powered the SR-71 Blackbird.

The WaveRider is basically wingless — it has some little fins on its side — so it is designed to ride its own shockwave, hence the name. The flight will test the SJ61 scramjet engine, built by Pratt & Whitney Rocketdyne, as well as the craft’s thermal protection systems, airframe and engine integration.

Tuesday’s flight will be the third time a WaveRider has been aloft, but in the past it had remained attached to a B-52. This time, the bomber will drop the craft and a solid rocket booster will accelerate it to about Mach 4.5. Then the scramjet engine, which uses the same fuel as the SR-71 Blackbird, will push the X-51A to Mach 6 as it climbs to about 70,000 feet. Scramjets can burn atmospheric oxygen, so they don’t need to carry huge, heavy fuel tanks.

The X-51A program could pave the way to hypersonic weapons and future access to space, the Air Force says.