How pilots land their planes in powerful crosswinds

Watch a giant A380 land slightly sideways, and learn all about crabbing and side-slipping. 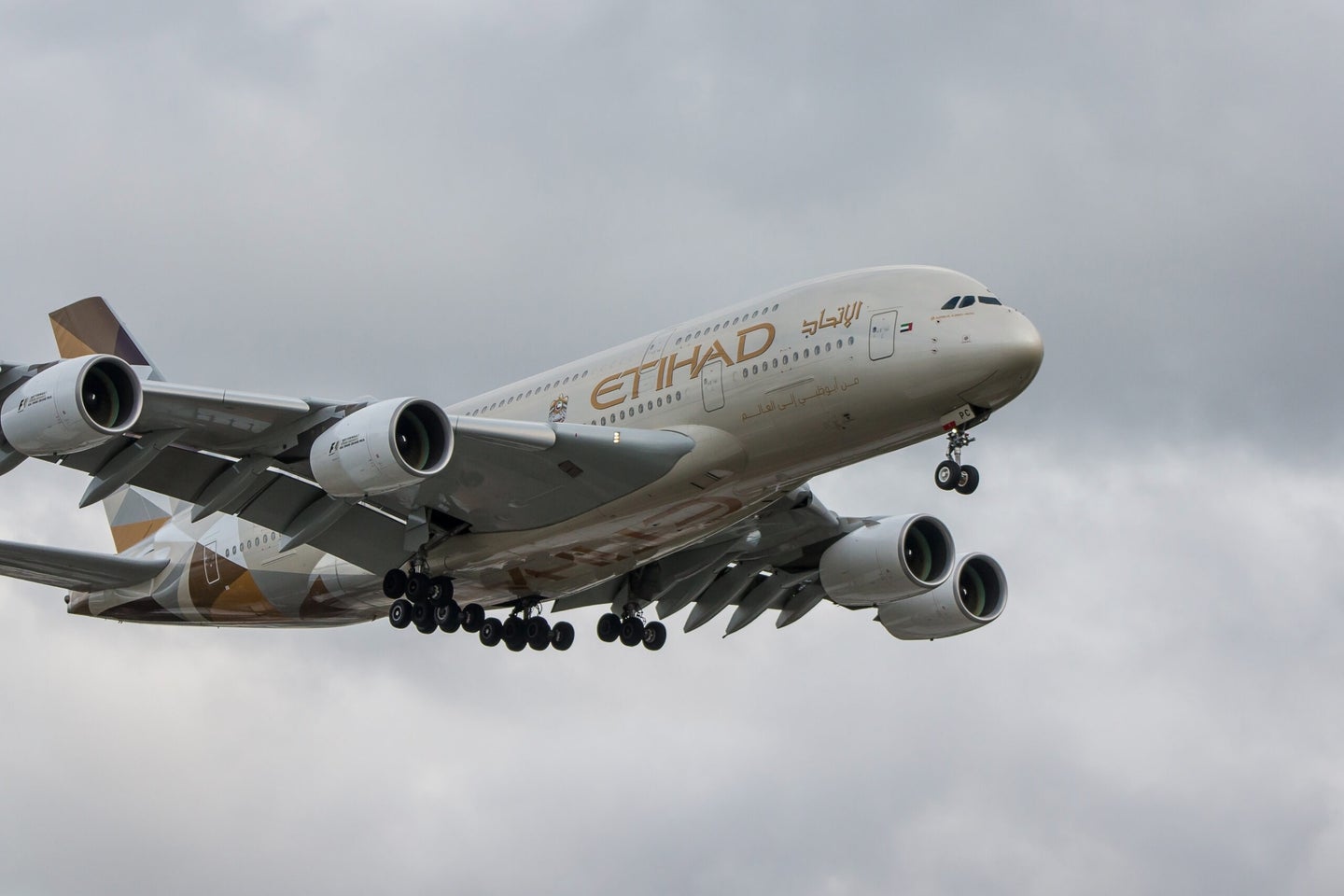 An Etihad A380 landing at Heathrow airport in 2017. Jarek Kilian
SHARE

Watching an aircraft land on a day with strong crosswinds is a hypnotic, breath-holding experience. The big metal bird comes in with its nose pointed askew, the wings may see-saw back and forth, the landing itself might appear rough or bouncy—and occasionally, the pilot just aborts the procedure and takes off again.

A recent nail-biter of a video is a case in point: It shows a giant A380 landing in strong winds on February 15 in London—coming in somewhat sideways, plunking down its back wheels, then lining itself up with the runway as its nose wheel descends. Other footage from earlier in the month shows even more high-wind landings as pilots guided their aircrafts down onto solid ground.

Pilots landing in strong crosswinds have a number of considerations and techniques at hand when taking a plane down during final approach and landing. Speed is a key variable, and the pilot must decide how much faster they want to come in than normal, says John Cox, a retired commercial pilot and now CEO of Safety Operating Systems. Landing at a higher velocity in gusty conditions ensures the craft will still have enough lift if it’s suddenly caught in a trough between gusts, when the wind speed over the wings suddenly drops.

But the main technique that you’ll observe from commercial pilots is called crabbing. A crab—the actual beach critter—faces forward as it moves sideways, and an airliner will do something similar, but less dramatic. Usually a plane approaches the runway and lands with its fuselage parallel to the edges of the runway. While crabbing, its nose will be pointed into the crosswind while the plane as a whole moves in a straight line towards the runway, like a giant metal crab filled with people. It might look strange or precarious, but it’s a maneuver that pilots need to learn.

“Professional pilots get pretty good at it,” Cox says. “It is a skill that humans do better than machines—most of the autopilots have much lower crosswind limits than human pilots do.”

Meanwhile, the human at the controls will also be adjusting the power to the engines in response to the gusts. “If you lose any airspeed, you really want to gain it back,” Cox says. “That’s why you’ll hear the power come up and go back in these gusty conditions.”

In some cases—like with that enormous A380—aviators will crab the plane and then touch its rear wheels down as the aircraft is still askew, and then will bring the nose around straight. This puts lateral stress on the wheels: a “side load.”

“The landing gear is designed to have a significant side load on it, and as the airplane touches down, then the momentum of the airplane—which is pretty close to center line—will bring the airplane very quickly in alignment with the runway,” Cox says.

The other technique a pilot has at their disposal is called a side slip, which has its own advantages but may not produce a great ride for people who understandably prefer their aircraft to be level. The plane will be oriented straight down the runway—not crabbed—and the pilot will lower the upwind wing so the plane is banked into the wind. At landing, the upwind wheels hit the runway before the downwind wheels. There’s no side-load on the wheels, because the direction the tires want to spin is aligned with the direction the aircraft is moving. “That’s great from a flight-dynamics standpoint,” says Richard P. Anderson, a pilot and professor of aerospace engineering at Embry-Riddle Aeronautical University.

Credit where it is due, this livestream has had me in stitches today! 😂 #StormCaira pic.twitter.com/wAGsiYhBDQ

But while a crab keeps the cabin of the aircraft level with the ground—a passenger’s drink wouldn’t slosh side-to-side, Anderson notes—the side slip has the whole craft banked. “If you were a passenger, you would feel like you’re being pushed onto the side wall of the airplane,” he says. “Passengers really hate that.”

In real-world conditions, pilots typically combine the crab with a side-slip. The plane will come in crabbed, and then the pilot will straighten out the heading at the last minute with a quick side slip, dipping the upwind wing and lining up the plane at the same time. Cox, who flew 737s, did that maneuver. “You picked it out of the crab, and put the upwind gear on the ground in one move,” he recalls. “There’s not a lot of room for error.”

But not all aircraft are welcoming to a side-slip. Cox says that pilots at the helm of a big plane like the A380 may avoid banking it like that, close to the ground, to prevent the outermost engine on the upwind side of the plane from potentially hitting the tarmac. It’s worth noting that the A380 landing was reportedly criticized—after all, pilots can abort a landing and try again as opposed to pulling off something dramatic.

In fact, not every approach results in a landing. If pilots don’t like the way they’re lined up, they’ll do a go-around—a benign aviation maneuver in which the aviators decide not to force through a bad set-up and instead, approach it again. I experienced one once in an F-16, but it also happens on commercial flights.

Even with these carefully practiced techniques, the goal in high winds isn’t necessarily to put the airplane down gently, either—a move that pilots call a “greaser.” Pilots aim to get the gear solidly on the runway and keep it there, preventing the aircraft from floating downwind.

“You want a good firm touch down,” Cox says. “You want that gear on the ground.”

Beyond the world of commercial aviation, different aircraft have varied types of landing gear, which can make them more or less forgiving during a landing. A 737, for example, has a tricycle-style gear—two sets of wheels by the wings, and one up front. But not all planes have a configuration like that. Other older planes, like a T-6 or DC-3, are called tail-wheel planes: unlike a commercial plane, their fuselage isn’t level with the ground when it’s sitting on the tarmac, and it has just one wheel in the back. Because of the configuration of the gear on those planes, they are very unforgiving if the pilot doesn’t put it down lined up correctly, Anderson, of Embry-Riddle, says. You don’t want to land a tail-dragger while it’s crabbed. The craft can do a “ground loop” after it touches down, which is bad—the plane turns hard, spinning around, and one of its wings can smack the ground.

Ultimately, even if the commercial craft of today are more robust while landing than their old-fashioned tail-wheel ancestors, parking one down on the ground in high crosswinds is a move in which a pilot may be “hyper alert,” Cox says. “It is a very satisfying feeling,” he adds, “because you’ve been able to use a lot of skill, honed over years of experience, to successfully get the airplane safely on the ground.” The passengers, on the other hand, may feel more relieved than satisfied.