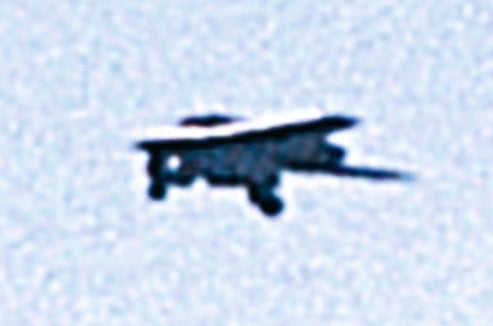 A mysterious, unidentified drone that has been spotted in multiple photos from Afghanistan resembling previous stealth aircraft has finally been officially revealed. The U.S. Air Force confirmed the new craft, designated the RQ-170 Sentinel, to Aviation Week last Friday, after photos circulating online had caused much speculation among defense buffs.

Informally dubbed the “Beast of Kandahar,” the tailless flying wing apparently is an RQ-170 Sentinel designed to provide recon and surveillance for warfighters on the frontlines. Online photos had shown the drone at a General Atomics Aeronautical Systems’s hangar in Kandahar, Afghanistan.

The 30th Reconnaissance Squadron also operates the RQ-170 at Tonopah Test Range — a location perhaps better known as Area 52 — under the aegis of Creech Air Force Base in Nevada.

The unmanned aerial system (UAS) comes courtesy of Lockheed Martin’s Skunk Works, which has worked on the U-2 and Blackbird spy planes as well as a swimming spy plane for the U.S. Navy. Lockheed had previously displayed a different stealth drone design that bore resemblance to the Reaper drones currently flying missions in Afghanistan.

The Ares technology blog points out that the stealth features suggest a drone meant for tactical operations in support of combat troops, rather than sneaky intelligence-gathering.

Meanwhile, the UK has launched its own call for a laser-toting stealth UAS. We’ll let you know when those designs leak out.