The U.S. Military Is Patrolling Djibouti With Robot Golf Carts

A simple machine, in the works for 30 years. 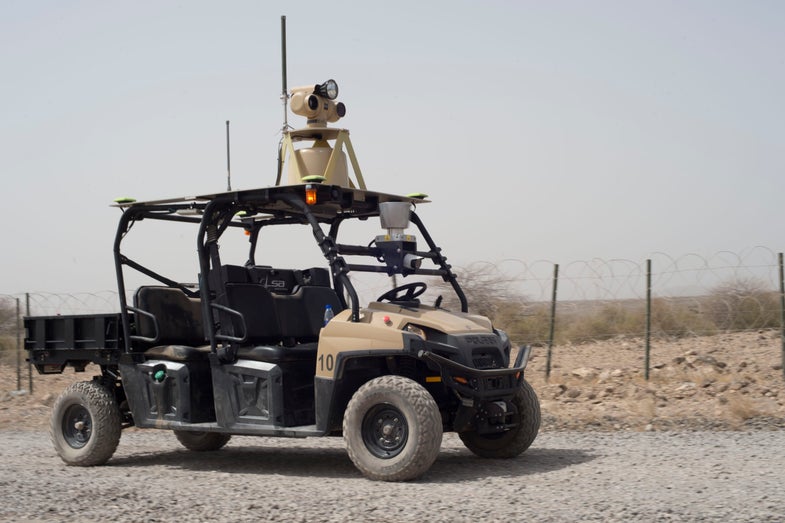 At the best of times, military patrol duty is equally boring and important. Physically being in a place reminds others that the military is there, armed and ready to take action. It’s a good way to watch a lot of space for signs of hostile activity, but it also commits a lot of people to the work of patrolling, and puts them at risk. What if, in many situations, a robot could do the actual driving around and watching part of patrolling, and armed troops could travel quickly into the danger when it arose?

Meet MDARS, or the Mobile Detection Assessment and Response System.

It’s a remotely controlled, unmanned vehicle that resembles nothing so much as a rugged golf cart. And it’s the result of at least 30 years of work. The concept was approved in 1985, and the first prototype drove onto the Army’s Aberdeen Proving Grounds in 2000. It was originally designed to patrol storage sites and warehouses, places that are the trifecta of big, dull, and dangerous in the wrong hands.

There are several different bodies for the vehicle, but they all work roughly the same. They can drive off-road, watch in both normal vision and infrared, and scan the terrain around them with lasers (well, LIDAR), to make sure they’re avoiding obstacles. They can also navigate autonomously, which frees the human driver to instead monitor the video coming in.

And now they’re driving around parts of the Horn of Africa. Operated by Combined Joint Task Force-Horn of Africa, which is based in Djibouti, the task force works to train local militaries. Somalia and Yemen, which border Djibouti by land and just across the sea, respectively, house their share of hostile militant groups, including the al Qaeda affiliated Al Shabaab. Patrolling with robots like MDARS means keeping troops out of danger, and making it so more of them can respond to danger when it happens.

Watch a little video about MDARS below: