A radio signal tells the components to vaporize. 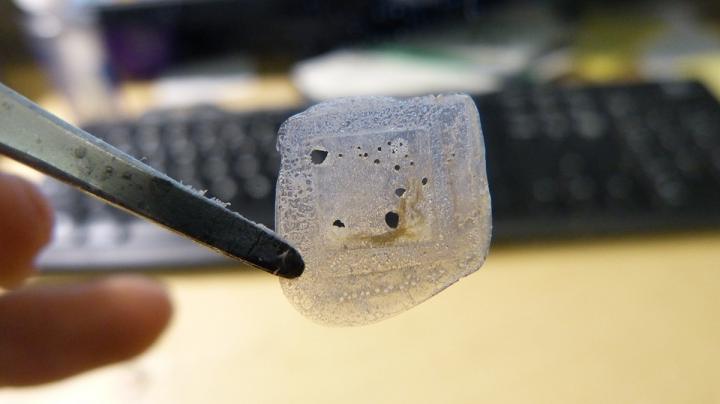 Engineers have come up with a trick to make electronics disintegrate from far away. The technology represents a new kind of transient electronics, which are designed to disappear when they’re no longer needed. In this case, chemicals that can destroy the circuit stay sealed away—until you unlock them with radio waves. This means that if a device containing these electronics were stolen, you could remotely order it to self-destruct, wiping its data.

“It literally goes into the air,” says Amit Lal, a professor of electrical engineering at Cornell University and one of the researchers behind the new design. “Very little remnants of it are left behind.”

Scientists are hoping to use transient electronics to build medical implants that vanish instead of requiring surgical removal. Or they might appear in sensors deposited in forests and oceans to measure things like pollution or carbon dioxide levels. That way people or robots wouldn’t have to go collect them later.

Other researchers are designing transient electronics that use water or heat to initiate self-destruction. But that approach has some drawbacks—you don’t necessarily want your gear to start dissolving as soon as it rains. So Lal and his team have created electronics that won’t disappear until commanded.

The design consists of a microchip embedded in a polycarbonate shell. Inside the shell are tiny cavities filled with metals such as rubidium and cesium. These metals react with oxygen, and are key to destroying the chip. “You can effectively think of it as a self-triggered fuel,” Lal says. “Unlike gasoline, where you need a match to light it up, here you just expose it to air and it will start reacting.”

Most of the time, the metals are barricaded behind membranes made from graphene and silicon nitride. To unleash them, the researchers send a radio signal to the chip. The chip then passes an electric current from its battery though the membrane. This warms the graphene up, making it expand until it cracks the silicon nitride. Then air can rush in and begin reacting with the metals. Heat from this chemical reaction pours into the plastic shell, breaking and finally vaporizing it.

As the shell cracks, it can shatter the microchip as well. “Once you heat this stuff up, there’s enough stress in it to break up the chip into tiny, tiny pieces,” Lal says. He’s also experimenting with chemicals that form hydrofluoric acid when heated to etch away at the chip.

A gadget with these electronics would be safe to handle most of the time. However, “I wouldn’t say you should hold this while it’s self-destructing,” Lal says. The device could theoretically come equipped with sensors to prevent it from vaporizing if a person was nearby, he says.

The team was issued a patent for the new technology in December. Once the electronics disintegrated, you’d be left with a fine powder made of cesium and rubidium oxides, sand from the silicon chip, tiny flakes of carbon from the graphene, and the battery. Lal’s colleagues at Honeywell Aerospace are working on a vaporizable battery as well.

All of this happens in a cube about 0.04 inches wide. “You can think of them as a LEGO block,” Lal says. A device built from these tiny pieces could be programmed to trigger all of them at once, or only destroy a select few.

Lal can envision the technology in environmental sensors that would vanish when they received a signal from a drone flying overhead. Another possibility would be using the energy released as the electronics break down to propel microrobots. Or the tech could make consumer gadgets more recyclable. After the circuit in your phone crumbled, precious metals like gold or platinum would be left behind for recyling. The casing and screws in your phone could potentially be made from vaporizable plastics as well, Lal says.