It’s hard to keep a fire burning across a many-thousand-mile relay race. 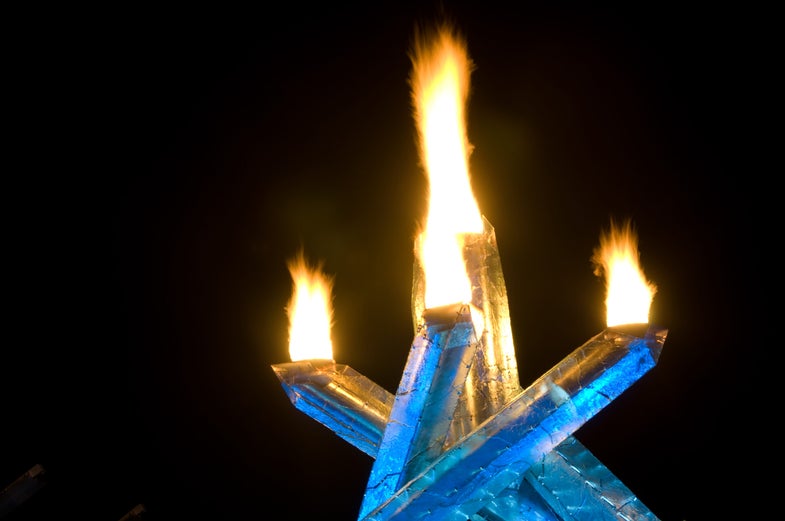 Unfortunately—oddly—it all began with Hitler. For the 1936 Olympic Games in Berlin, Adolf Hitler wanted to draw on the ancient Greeks to bring a certain authoritative, classical air to modern Germany. The head of the Reich sports office had just the plan to do it: hold an elaborate relay to bring a symbolic Olympic flame from Greece to the games.

The original torch was meant to be emblematic of German engineering and excellence, so the contract to produce them went to the Krupp Company. The same group would later provide the artillery necessary for the Nazis to take over much of Europe. The design was simple, with one primary function: to keep the flame burning. That’s still the goal today. Since 1936, the torch has taken on a different form for every Olympic relay and undergone various transformative redesigns to make it more resilient and less likely to burn out. It’s a strangely singular goal for an engineering project, but it allows for almost limitless creativity: The torch design can vary in almost every aspect, it just can’t go out.

Engineers all over the world have, through the years, set about designing a flame that resists extinction, to varying degrees of success. But Olympic organizers know better; each year they arrange complex contingency plans in an effort to ensure that the final torch did, somehow, come from that original fire lit in Greece.

The reason for these elaborate backup plans is a good one: carrying a flame for thousands of miles and across varying landscapes is, unsurprisingly, an incredibly difficult feat. There are so many steps along the way that can wreak havoc—that starts with the initial lighting.

The Olympic flame is lit with a mirror

The original Olympics looked almost nothing like the modern ones, but we like to draw on the ancient origins and so we still hold a ceremony at their birthplace: Olympia, Greece. Like children igniting ants with a magnifying glass, the actresses who play the part of Greek priestesses light the initial Olympic torch with a mirror. Specifically, they use a parabolic mirror, which is a curved and looks a bit like a small satellite dish. The curvature focuses light in one spot, called a focal point, where the beams all meet at a single, intense spot. The one used in the ceremony at the Temple of Hera in Olympia has a focal point just above the mirror’s surface. A “priestess” simply has to hold the torch in that spot and wait for the light to heat the fuel enough for it to ignite.

The ceremonial lighting is always held in Greece, and the flame is then symbolically transferred from person to person in an elaborate relay to whichever city is hosting the games. Greece is a fairly sunny place, so lack of available focalizing light is rarely a problem. But just in case, Olympic organizers hold a dress rehearsal on a bright day leading up to the real ceremony and light a flame, thus creating a backup source should the mirror fail to work during the ceremony.

And thus begins a little-known Olympic tradition: keeping a backup flame. Yes, that flame that’s never supposed to extinguish sometimes probably does—we just never hear about it. To ensure that no one has to lie and say that the flame used to light the torch at the opening ceremony of the games isn’t actually derived from that initial light, they light multiple miners lamps from the original flame and keep those backups lit, just in case.

Which means, of course, there isn’t just one Olympic flame.

Each torch only burns for a short while

As the relay moves along its course, each torch-bearer only carries a lit flame for a short while—about 20 minutes according to one report. That’s because the fuel in a torch of that size simply can’t last very long. The fuel should, in theory, last for longer than that to ensure that if something goes wrong on a leg of the relay, the team has some wiggle room. Still, rain and wind have put out the torch before, and organizers have had to relight the flame from the backup lanterns every time.

Liquid fuel allows the flame to reignite itself

The 1972 Munich games were the first to use liquid fuel, which today is usually some combination of butane, propane, and propylene. Mixing each in varying amounts helps to control the brightness and color of the flame. Each chemical gives off a certain characteristic color of light and burns at slightly different temperatures; a higher temperature results in a brighter color.

Most importantly, having a pressurized tank of fuel allows for a pilot light hidden inside the top of the torch. This little flame can reignite the whole thing if the main flame goes out, which is crucial given that torch-bearers have to sometimes run in the rain and up mountains where the air gets thin. Engineers have to prepare for all these possibilities.

In an interview with Georgia Tech, Sam Shelton, who created the torch for the 1996 Atlanta games, said that he and his team tested the torch’s endurance by carrying it to the top of Pikes Peak in Colorado, a 14,115 foot summit. He even took the torch into the shower with him to test its ability to withstand rain.

The final torch is a little bit special, even if it looks the same on the outside

At the opening ceremony, engineers need to ensure everyone there is able to see the famed flame. Sometimes they design the fuel to smoke a bit, making the light more visible. Other times they just need to make the flame brighter by igniting more gas at once or choosing a fuel that burns at a higher temperature.

This went disastrously wrong in 1956, when the Olympics where held in Melbourne. The engineers had put a combination of magnesium and aluminum inside the torch so the flame would sparkle and burn brightly. Which it did. But it also spewed bits of hot metal and sparks that burned the arm of the poor torch-bearer.

Now, designers mostly use liquid fuels that have a more brilliant or larger flame to increase the visibility.

No matter what, though, the flame you see igniting the cauldron at the opening ceremony did somehow come from a fire lit in Olympia. It just takes an intricate system of backups and contingency plans to do it. And even if all of those plans failed, rest assured that you will never know the difference.

Note: This article previously listed Pikes Peak as 15,000 feet tall, when in fact it is 14,115 feet tall. Thanks to the mountain enthusiasts for keeping us honest.