The Michigan State Police tested the electric Ford Mustang Mach-E, and loved it

Ford gave the keys to a Mach-E to the Michigan State Police to match up its new electric crossover against gas-powered rivals. 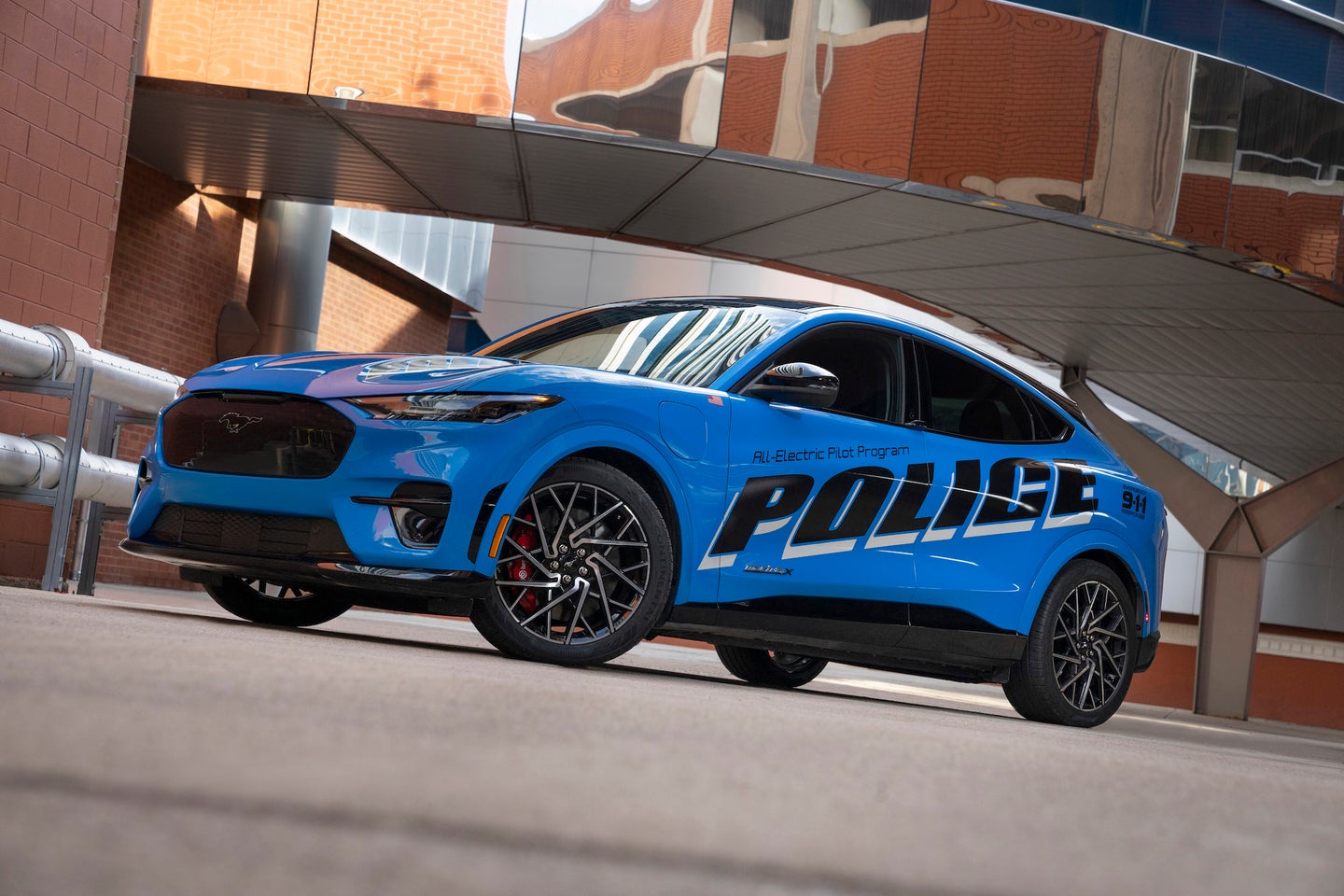 When Ford became the first automaker to offer a factory-issued police package in 1950, it solidified itself as the face of the police cruiser. The Blue Oval’s logo—which was actually a crest back then—is still the first thing that most speeders see through their rear window before receiving a ticket.

A lot has changed in 71 years. The iconic image of a police cruiser morphed from being mainly black and white sedans to include a variety of SUVs, pickups, vans, and more. Vehicles with more room, more lights, and more tech have become the go-to for law enforcement, giving Ford the perfect opportunity to prove that its all-new electric Mustang Mach-E could stand up to the challenges that police face every day.

[RELATED: Ford’s electric Mustang Mach-E is an important leap into the future]

In mid-September, Ford handed over the keys of its Mach-E Police Pilot to the Michigan State Police, one of two law enforcement agencies in the nation that tests annually for potential patrol car candidates. Every vehicle tested has its scores tabulated and published as a public report. Naturally, the king of the police cruiser wanted its all-new electric crossover to get in on the action.

Trials that assess vehicle performance include scenarios that mimic a potential pursuit, which allow testers to measure the car’s acceleration, braking, top speed, and agility around a tracked course. The tester then examines the car’s utility by evaluating its ergonomics and accessibility—instrumentation, vehicle controls, and overall outward visibility are key during this grading process. And finally, they rate the car’s fuel economy to estimate its operating cost.

While the Michigan State Police have yet to report the Mach-E’s exact performance in these areas, Ford says that the Mach-E was able to stand up to the competition, a group composed heavily of tried and true gasoline-powered cars.

“The fact that the Mustang Mach-E successfully stood up to the grueling Michigan State Police evaluation demonstrates that Ford can build electric vehicles that are capable, tough and reliable enough for even the most challenging jobs,” said Ted Cannis, CEO of the automaker’s commercial division, Ford Pro. “We understand the needs of our commercial customers and are committed to unlocking new electrification opportunities for them.”

Ford didn’t just test its Mach-E as a police cruiser for US customers, it also built a concept design for the Bobbies across the pond.

In early September, Ford unveiled its Mustang Mach-E police concept for police in the United Kingdom. Outfitted in so-called “blue light” livery, the Mach-E sports the same high-visibility Battenburg markings and emergency lights as other police vehicles in the UK while offering a modern approach to the aging gas and diesel-powered fleet. Since showing off the model, seven separate UK police forces have requested a full evaluation of the Mach-E as a future police cruiser.

Ford’s pitch to the various police departments is all about the crossover’s efficiency and potential cost savings over a traditional cruiser with an internal combustion engine. While the thought of an electric police car might seem like a foreign concept, law enforcement agencies across the world are starting to buy into the message.

In the States, the popularity of battery-powered patrol cars is growing. The Bargersville Police Department in Indiana began using a Tesla Model 3 as a marked police vehicle in 2019—today, it has five. Likewise, police in Fremont, California (where Tesla’s vehicles are manufactured) recently purchased its first Tesla Model Y to complement its existing Model S.

The biggest driving factor for many agencies is money. Although departments will pay more up-front for the electric vehicles, the overall cost savings over the vehicle’s service life can make the purchase nearly cost-neutral compared to traditional gasoline-powered units.

As Ford begins to offer electrified versions of its vehicles, it’s inevitable that more officers will find themselves behind the wheel of a car powered by batteries. The Mach-E happens to be Ford’s first offering in the EV space, and the Blue Oval wants to prove that electric can be just as good—if not better—than gas.