The designs made history. And they might be used again. 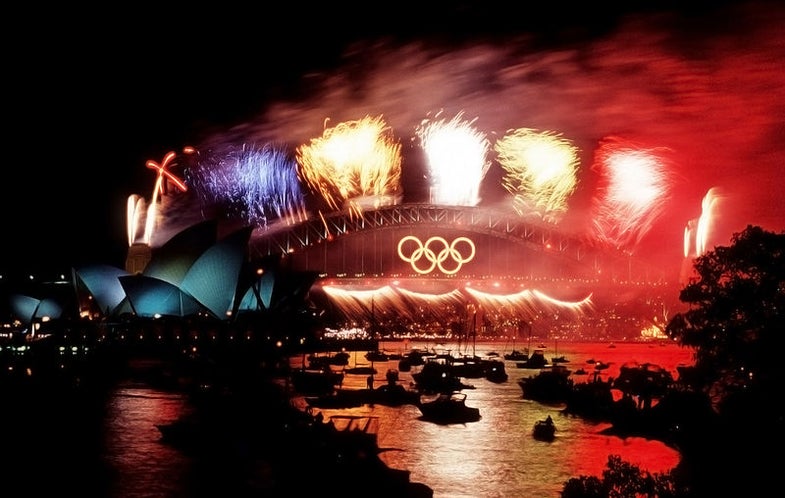 When the Olympics returned in 1896 after a few-millennia-long hiatus, they were all about grandeur—after all, it was a revival of an ancient Greek event. The opening and closing ceremonies were important ways for host countries to broadcast their best qualities to the world, but nothing made an impression like the architecture itself. It housed the athletes, offered the spectators a seat, and remained a testament to the city’s Olympic history long after the games were over.

But only a few of these buildings are true hallmarks of innovation. Instead of simply looking good, these seven(ish) structures used new materials or design principles to win architectural gold.

Like so many Olympic designs, this one looks like it could be the work of alien architects. The Palazzetto dello Sport is built mostly of prefabricated concrete modules. The Lego-style construction process meant the dome of the 3,500-seat arena was erected in just 40 days. Modular buildings were still relatively rare in the Palazzetto’s early days—especially for a building this prominent—but this architectural method is relatively common today. As city populations skyrocket, builders hope pre-fab materials will allow a new apartment complex to go up quickly and cheaply, while still looking sleek.

The Yoyogi gymnasium’s iconic sloping rooftop is also the source of its innovation: The iconic arena is topped with a suspended roof. Like a suspension bridge, the horizontal ridge at the top of the building serves as a spine hanging between stabilizing towers, one on each end. The structural cables ripple down from the spine, holding the building together along the way. At the start of the 1964 Olympics, it was the largest suspension roof in the world and certainly the most famous, as cable-suspended roofs first cropped up in the late 1950s.

The Munich Games are, unfortunately, best remembered for the harrowing hostage situation that effectively eclipsed all competition. But for students of architecture, the Olympiastadion holds a special place in the architectural history of the competition. Instead of creating an open-air or roofed stadium, architects and engineers created a lightweight tent that would partially enclose the stadium. Made of acrylic glass and stabilized by steel cables, this was one of the first time these materials were used to create a canopy of this size. Instead of fully covering the facility, the canopy is arranged mostly to one side. The designers hoped that this would make the stadium look like the snow-capped Alps, the monumental mountain range in southern Germany.

The central hall at the Lillehammer Olympics was cutting-edge and, at the same time, draws from ancient inspiration. Norwegians has a long history of putting their plentiful caves to good use, with everything from data centers to military storage units built right into the Earth. The Olympic organizing committee was inspired, and decided to build an 5,500-seat hall in a cavern. It was a eye-catching choice and a strategic one; it maximized city space aboveground and paid homage to Nordic heritage. The Lillehammer team hammered away at the million-year-old gneiss rock for about eight months before construction could even begin. The resulting structure is the biggest hall of its kind and served as the epicenter of the 1994 Olympic hockey games.

The “Water Cube,” as it’s affectionately known, gets its glassy beehive glow from a substance called ethylene tetrafluoroethylene, or ETFE foil. Synthesized in 1938 and, experts believe, first used in construction in 1982, the pillowy plastic can be organized in layers to create thin, translucent layers. That skin is then attached to a building frame and, at least in the case of the water cube, illuminated to great effect. Since ETFE was used at the Olympics, it’s continued to crop up in other buildings around the world, including the home of the 2018 Super Bowl.

Most of the stadiums mentioned here have been well-used long after the Olympics were over. But not all stadiums are so lucky. Many turn out to be money pits that can go years without finding a new purpose. That’s why the Brazilian Olympic organizing committee had the three R’s—reduce, reuse, and recycle—on their mind.

The Future Arena, shown here, was built as a temporary sporting venue that was easy to disassemble after the games. The materials would provide necessary elements four schools. “The plumbing components and the wiring are all designed so that you don’t rip it out,” Bill Hanway of AECOM, the U.S. firm that designed the master plan of the Barra Olympic Park, told Citylab at the time. “You unbolt it and remove it, and re-apply it to these four schools.”

However, these plans have not—and likely will not—ever be implemented. In 2017, a year after the Olympics, Rio’s mayor said he wouldn’t fulfill those original promises. While it was built with the best intentions, corruption scandals doomed the designs.

In response to this mistake, the International Olympic Committee has given up on recyclable buildings, but is still promoting sustainability. The committee has selected Paris and Los Angeles as hosts for two upcoming summer games, because those cities can accommodate the event with their existing building stock.

The Stade de France, seen here, was built for the 1998 FIFA World Cup. With a seating capacity of over 81,000, it will easily accommodate a portion of the 2024 Olympic games. The same is true for the Los Angeles Rams stadium that’s currently under construction; it will host NFL games well before and after the Olympics blows through town.

While it’s a departure from the glory of Olympics past, where everything was made new, Martijn Giebels, author of the blog Architecture of the Games, says this is a step in the right direction. “I think we currently have arrived at a turning point. There are many… countries in opposition to hosting the Olympics. This is due to the extreme costs of hosting the event, white elephants, [wasteful building projects], and corruption scandals.” By recycling old buildings, Giebels says, we can work toward a cheaper, cleaner future for the games. It could also mean we’ll get a chance to celebrate these old, innovative buildings again.