In a pandemic, if you can’t fly people, you might as well haul stuff. Here’s how that works. 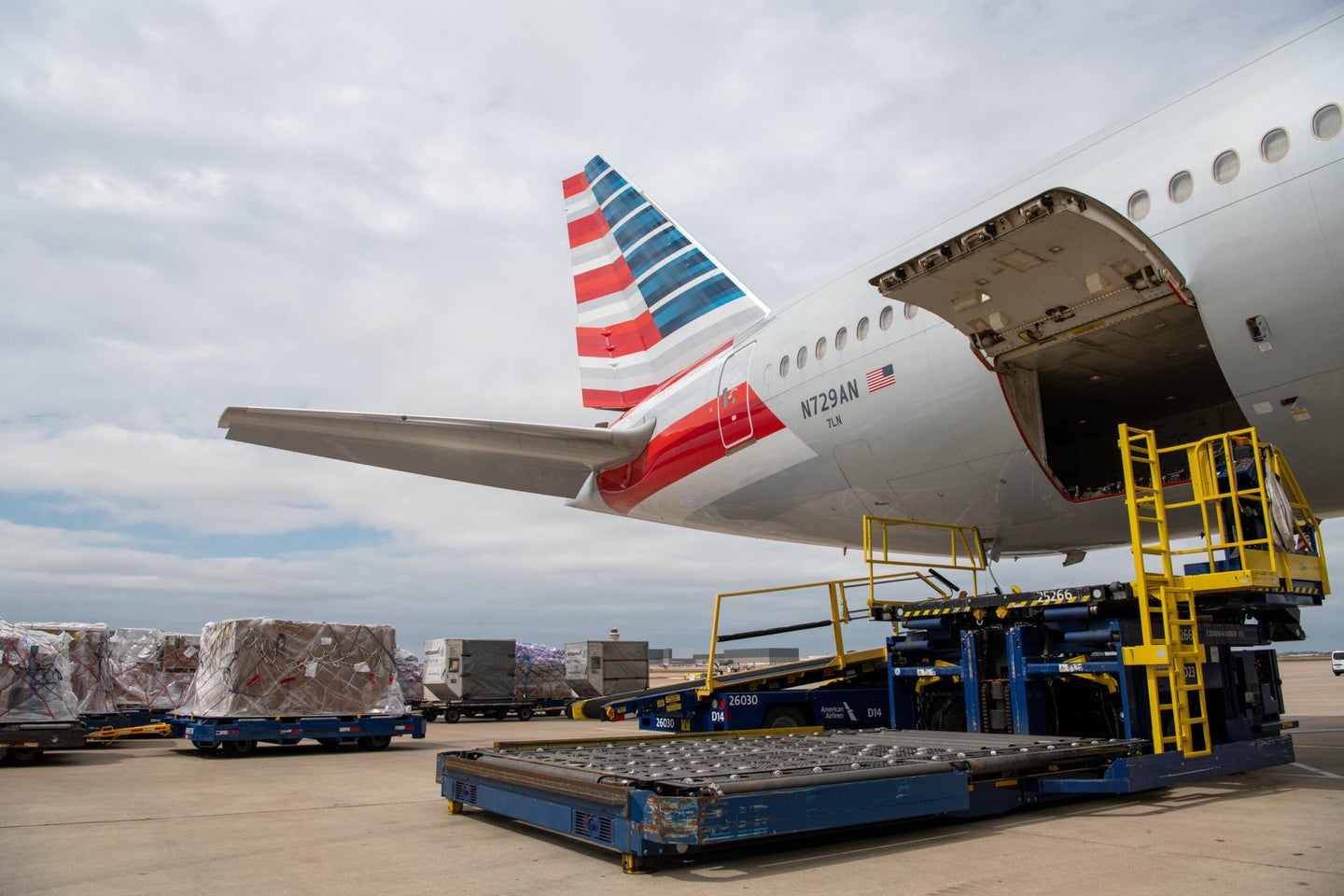 The belly of a big Boeing 777 American Airlines aircraft offers plenty of space for cargo. In fact, the deck to which your bags disappear on a typical flight can hold as much as 100,000 to 120,000 pounds of freight. That’s the equivalent, in pounds, of more than 33 Toyota Corollas.

But on recent American Airlines flights between Dallas and Frankfurt, Germany, there were no paying customers, and thus no bags. These were flights solely for cargo—stuff like mail for the military and machine parts. The first mission took off for Frankfurt on March 20 with some 37,000 pounds of goods on board. When it returned to Dallas-Fort Worth, it was hauling 60,000 pounds.

It’s not rare for American to carry cargo—but usually that freight coexists with passenger bags, in whatever space is available in the belly. It’s highly unusual, however, for the cargo to get an entire plane to itself. That hasn’t happened since 1984, according to the airline, when it operated dedicate freight service. The reason? Air travel is dramatically down, of course, because of COVID-19. And if you can’t fly people, you might as well schlep stuff.

“This is really precedent-setting in that we have not done this in decades, for all cargo-flights,” says David Vance, the vice president for cargo operations at American. “We are a passenger airline, and that is our main mission.”

The cargo deck on the 777-300 they’re flying for these operations offers 14 different spots for freight. Each of them is about 8 by 10 feet in size, holding supplies stacked about 5 feet high and weighing as much as about 5 tons. There’s also a space in the back for bulk goods, like mail sacks.

Of course, when loading a wide-body aircraft for a mission like this, they need to ensure the plane is balanced. “It’s kind of a little orchestra that we do,” Vance says.

Crews can’t simply chuck items such as mail sacks into seats meant for passengers. Instead, the bags and pallets go down below. Even if American had FAA approval to use seats for safely transporting cargo, there are internal technical challenges to figure out, says Kristin Rademacher, a spokesperson for the airline. “How do we let our system know that it’s now mailbags, and there’s a variety of weights?” she asks. “We’re all trying to quickly adapt our regular processes to be able to fly in this new environment.”

So far, American has flown two round-trip missions—each with a crew of three pilots—that are cargo-only, and a third took off yesterday from Dallas carrying more than 38,000 pounds of freight (and 160,750 pounds of fuel). A fourth is scheduled to depart on April 1. The New York Times mentioned these cargo-only flights in an article providing a detailed look at how American is coping during the coronavirus pandemic.

American is slashing its capacity dramatically for the next two months, it announced today. Its domestic flights will be reduced anywhere from 60 to 80 percent for April and May, when compared with last year. International flights will be down as much as 90 percent. And of course, American is not alone. Starting today, Southwest Airlines says that of the nearly 4,000 flights they usually operate each day, they’re cutting about 1,500. Last week, United Airlines announced it would be snipping its April schedule by 60 percent. Alaska Airlines has axed about 70 percent of flights for the next two months. JetBlue is making cuts, too.

Meanwhile, these all-cargo flights are opportunities for American to make money—the rates for shipping cargo are actually up because of reduced capacity in the industry, Rademacher notes, so financially, flying freight is sensible. (One of the best essays on the global freight industry is Barry Lopez’s 1995 Flight, which focused on Boeing 747 aircraft and first appeared in Harper’s.)

These American flights are ways to “try and continue to move goods across the globe,” Vance says, including items like mail. “We really want to continue to provide those services, even when passenger demand is not there.”