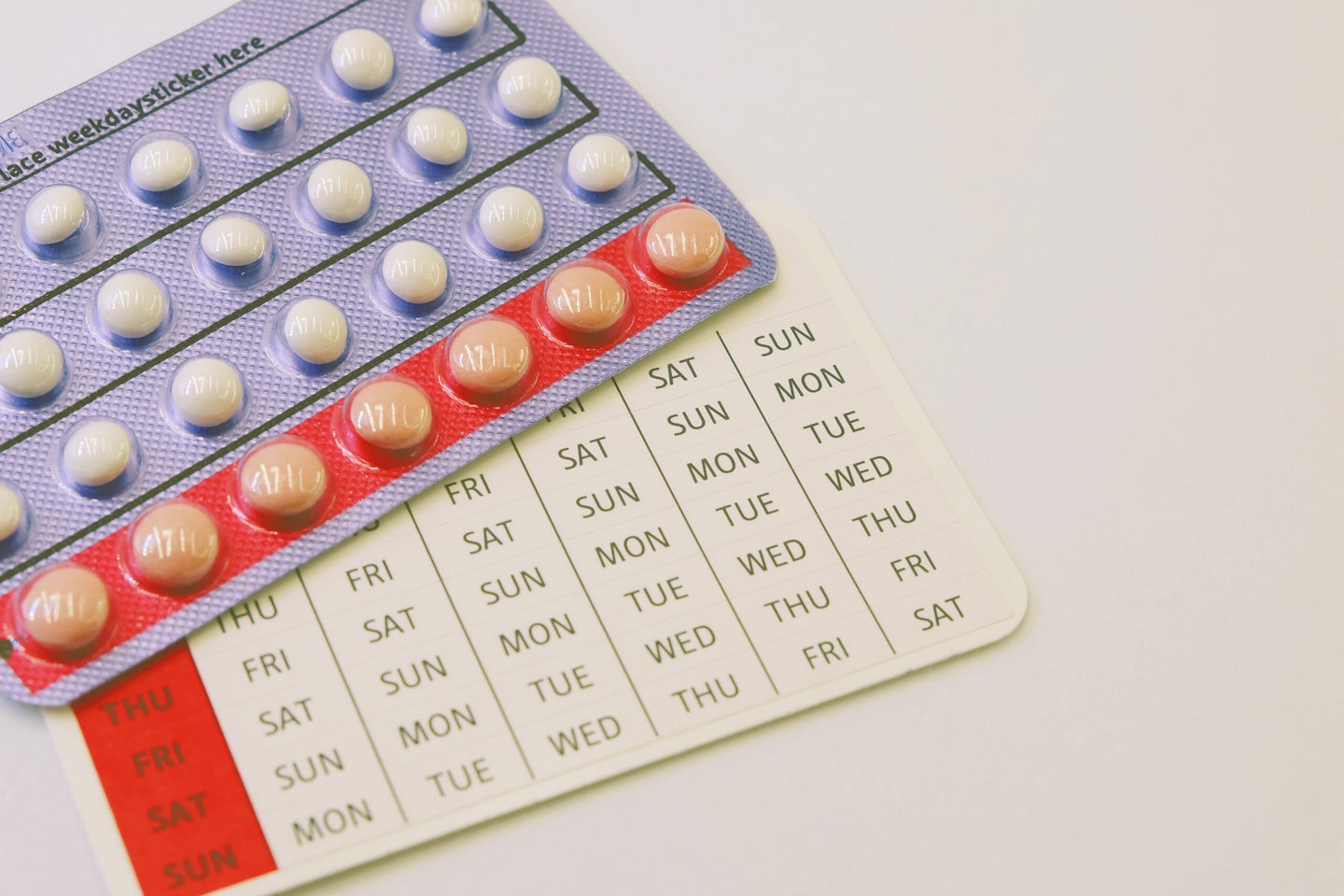 Some brands, such as this one, have placebo pills rather than a pill-free break. Vitahima/Shutterstock.com
SHARE

The way women have been advised to take the combined contraceptive pill for the last 60 years unnecessarily increases the likelihood of taking it incorrectly, leaving them at risk from unplanned pregnancy. And this far from ideal situation is the result of a cosmetic quirk of pill design, based on long redundant historical context.

This is because standard combined oral contraceptive pills—such as Loestrin, Ortho Tri-Cyclen, or Yasmin—are designed to be taken for 21 days, followed by a seven-day break, during which time the woman doesn’t take the pill and experiences vaginal bleeding. Pill-taking women therefore have what seems like a “period” every month.

But this “period” is far from necessary. Shortly before his death in 2015 I attended a lecture given by Carl Djerassi, the “father of the pill”. He remarked that the seven-day break, and resultant withdrawal bleed, was designed into the pill in the late 1950s in an attempt to persuade the Vatican to accept the new form of contraception, as an extension of the natural menstrual cycle. As is well known, this did not succeed: Pope Paul VI forbade artificial contraception. Despite this, the seven-day break has remained as a component of the combined oral contraceptive pill.

This is a problem. The seven-day break is a hazard that may increase the risk of pregnancy while taking the pill. This is because the level of contraceptive hormones in the body is the crucial factor in turning off ovulation, without which pregnancy cannot occur. It takes approximately seven daily doses of contraceptive pill to reach sufficient levels to turn the ovaries off. But the seven-day break allows these levels to fall again. If pill-taking is not resumed by the ninth day after stopping, ovulation will occur.

Missing an occasional pill is unlikely to cause hormone levels to drop to a level which would risk ovulation. But taking a deliberate seven-day break lowers hormone levels to a point after which further missed pills, either before or after the break, may allow ovulation to happen.

The seven-day break is therefore an inbuilt hazard. Many women accidentally prolong their pill free week by forgetting to restart the next packet on time, or by missing pills in the first or last week of the packet. The reduction of hormones in these circumstances can lead to unexpected ovulation, and, if intercourse has taken place, to pregnancy. But by shortening the pill-free interval (from seven to four days) and reducing the number of times a year that the woman is prompted to have a pill-free interval, the risk of accidental ovulation, and therefore unwanted pregnancy is reduced.

As a result, many clinicians now favor extended or continuous pill regimens where three or more packets of pill are taken consecutively and only then does a woman have a pill-free week, or a shortened pill free interval of four days. These less frequent breaks are sufficient to avoid continuous stimulation of the womb’s lining, which can cause unhealthy overgrowth of the tissue (endometrial hyperplasia). They also prevent inconvenient “breakthrough” bleeding which eventually occurs if the lining is not allowed to shed.

Some women already “tri-cycle” 30 microgram (standard dose) or 20 microgram (lower dose) pills in this way, running two or three packets together before taking a break, often to reduce the side effects of hormone withdrawal, such as migraines. But for more extended continuous pill-taking, use of lower-dose pills containing 20 micrograms of oestrogen is recommended to offset the increased yearly dose of oestrogen when fewer breaks are taken. This is because the total dose of oestrogen over time may be associated with the small, but well known, increased risk of breast cancer.

Using established contraceptive pills in this way is “off license“, meaning that the prescriber, not the manufacturer, will bear legal responsibility for harm due to their use. Nonetheless, extended or continuous pill use, off license, is professionally acceptable, and newer pills are being developed and licensed by pharmaceutical companies which are meant to be taken in an extended way, with fewer pill-free intervals.

As well as providing fewer opportunities for ovulation to occur, these extended regimens also mean that a woman has fewer bleeding days. One review found such regimens to be both safe and effective.

In a natural menstrual cycle, the lining of the womb builds up over the first half of the menstrual cycle under the influence of oestrogen, reaching its peak thickness at the time of ovulation. It is then maintained for 14 days by progesterone, after which, if no pregnancy occurs, it is shed through the opening of blood vessels within the womb’s lining, and the woman experiences a period.

In most contraceptive methods which cause a lack of vaginal bleeding, the supply of continuous low-dose progesterone greatly reduces the thickening of the lining, so that there is no need for it to be shed. In continuous long-acting methods like the IUS or contraceptive injection, women experience greatly reduced or no bleeding because the lining is largely dormant. With the combined oral contraceptive pill, lighter bleeding is experienced because the thinner lining sheds as a result of withdrawal of hormones, not because of a need to shed a proliferated lining.

Many women and girls welcome the reduction in bleeding days and the lessening of social disruption, and missed school and work days menstrual periods can cause. With the increased recognition of “period poverty” and the problems some women face in paying for menstrual protection, reduced bleeding days may also be financially beneficial for some.

Ultimately, the decision to bleed or not to bleed should be one made by individual women, in accordance with their lifestyle needs. Cleaving to a 21/7 pattern of pill taking, which was instituted for social not medical reasons, on the grounds of either tradition or unfounded health concerns, should no longer be the default position in regard to contraceptive pills.

Susan Walker is a Senior Lecturer in Sexual Health at Anglia Ruskin University. This article was originally featured on The Conversation.