A new vaccine protects mice from another dangerous coronavirus

A similar strategy might work for SARS-CoV-2, but the road to developing new vaccines is long. 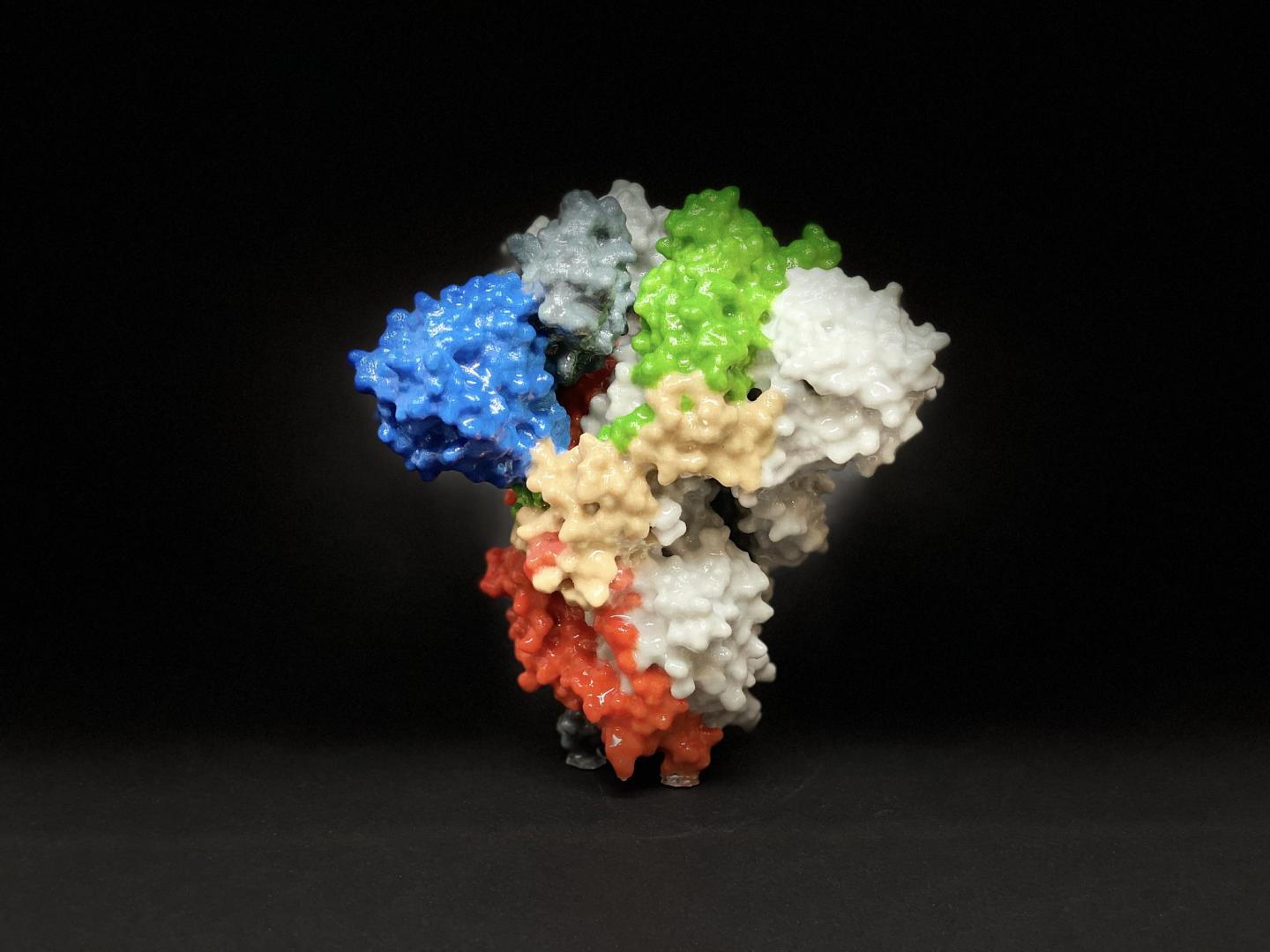 A spike protein on the surface of SARS-CoV-2, the virus that causes COVID-19. These crown-like structures give coronaviruses their namesakes. NIH
SHARE

Scientists have developed a vaccine that protects mice from Middle East Respiratory Syndrome (MERS), an extremely virulent respiratory disease caused by a virus belonging to the same family as the one responsible for COVID-19. In a recent experiment, all the vaccinated mice survived what should have been a lethal dose of the MERS coronavirus, MERS-CoV.

The vaccine still has a long way to go before it could be ready for human use. Still, the results are promising, and the researchers are adapting the vaccine to create a version that would be effective against SARS-CoV-2, the virus that causes COVID-19.

“This is a mouse model for a vaccine, so we can’t claim that it perfectly mimics the human immune system and what would happen in humans,” says Paul McCray, a pediatric pulmonologist at the University of Iowa in Iowa City and coauthor of the new findings, which were published April 7 in the journal mBio. “But we think this is a really encouraging first step.”

Coronaviruses are named for the crown-shaped protein spikes on their surface, which enable them to invade cells. There are seven members of the coronavirus family (that scientists are aware of) that can sicken people, four of which cause common colds. The other three are much more dangerous, and include the viruses that cause SARS, MERS, and COVID-19.

MERS initially spread to people from camels. The virus first emerged in Saudi Arabia in 2012 and has since moved to 27 countries. A large MERS outbreak in South Korea in 2015 motivated the country to invest in preparations for future crises; this is one reason why South Korea was able to respond so swiftly to COVID-19 and slow the rate of new cases.

MERS kills around 35 percent of the people who catch it, making it much deadlier than COVID-19. However, unlike the viruses that cause SARS or MERS, SARS-CoV-2 can replicate very easily in the upper respiratory tract, which includes the nose, sinuses, and larynx, McCray says. COVID-19 can also be transmitted by people who are experiencing few or no symptoms, making it much harder to detect and track.

The upshot of this is that COVID-19 has spread around the world and blossomed into a pandemic. There have been 2,494 confirmed cases of MERS in total and 858 deaths, whereas COVID-19 has infected more than 1.4 million people and killed more than 83,000 since it was first detected in Wuhan, China. While researchers are working on a number of different vaccine candidates for MERS and COVID-19, the FDA has not cleared any of them for any coronavirus in people.

The vaccine that McCray and his colleagues developed consists of a harmless virus—meaning one that can infect people and other animals but doesn’t cause harm—called PIV5 (short for parainfluenza virus 5), which infects many mammals without causing any disease. The team modified the benign virus to carry the MERS spike protein. This protein, known in immunology as an antigen, is what our immune systems use to develop antibodies, which make us immune to further infections. According to McCray, this antigen is key to creating effective immunity.

Like the nasal spray used for some flu vaccines, the vaccine is inhaled rather than delivered as a shot. However, this harmless virus has been linked to kennel cough in dogs, so live versions of the virus have been included in canine vaccines for many years. “Because of that we know that people have been exposed to it without any harmful effects,” McCray says.

He and his team immunized mice that they’d genetically engineered to be susceptible to MERS-CoV. A single dose sprayed into the rodents’ noses was enough to protect the mice from a lethal dose of MERS-CoV. By contrast, 75 percent of the mice that received a different, injected version of the vaccine made from inactivated, or killed, MERS-CoV succumbed to the disease.

When the researchers examined the rodents’ lungs, they found signs that the vaccine had roused the animals’ immune systems; the mice had created antibodies and T cells (white blood cells that help the body recognize a pathogen it has been exposed to before and mount an immune response) specific to MERS-CoV.

If a single dose of the vaccine can protect people from MERS, as it did for the mice, it could more quickly be scaled up for mass production. Another advantage is that the vaccine is given nasally. Because the MERS is a respiratory disease, presenting the benign virus nasally sends it straight to the source: the immune cells inside the respiratory system itself, McCray says.

He and his colleagues have now set their sights on COVID-19. The team has engineered mice that are susceptible to the novel coronavirus and have prepared a vaccine made from PIV5 and the spike protein from SARS-CoV-2 that they are planning to test in animals.

The coronavirus vaccines McCray and his team are working on use a piece of the virus, rather than a weakened live pathogen like the ones found in nasal flu vaccines. However, the findings show that a nasal coronavirus vaccine can work and may even be better than a traditional shot, says Mark Cameron, an immunologist at Case Western Reserve University in Cleveland who was not involved in the research.

“This is an important discovery that would highlight parts of an existing nasally-delivered vaccine platform that could be quickly adapted to deliver a COVID-19 vaccine,” he says. “It’s not the only vaccine or vaccine delivery system that’s being tested right now, but it’s certainly a novel one.”

Research on potential vaccines for COVID-19 is whipping along at unprecedented speeds. Scientists are developing a number of different types of vaccines, several of which have already entered human trials. Anthony Fauci—the director of the National Institute of Allergy and Infectious Diseases—has also encouraged companies to begin large-scale production of vaccine candidates before clinical trials have wrapped up, which would shave off additional time.

However, it will still be awhile before a vaccine for MERS or COVID-19 is ready for public distribution. Fauci has estimated that a COVID-19 vaccine won’t be ready for at least 12 to 18 months, and some experts have said this timeline is probably optimistic.

That’s because creating a new vaccine is a complicated, expensive process. Vaccines rely upon three basic ingredients, Cameron says. One is the antigen, that part of the virus that spurs the immune system into action. Many vaccines also contain a chemical called an adjuvant that prompts a stronger immune response. Finally, a vaccine needs to be delivered into the body using an injection or spray. “Each one of those components has to be selected and combined and tested to be the most effective across as many people as possible,” Cameron says.

After being tested in animals, a new vaccine candidate must also undergo three phases of testing in people to verify that it is safe, investigate the kind of immune response it provokes, determine the dose needed, and show that it actually prevents disease in people. If we rush these clinical trials, we run the risk of creating a vaccine that doesn’t work or is actually dangerous—like the 1976 swine flu vaccine that caused more than 400 people to develop Guillain-Barré syndrome, a rare neurological condition that can cause temporary paralysis.

“The number one reason it takes time is [that] you have to be as certain as possible that it’s safe,” McCray says. And just because a vaccine protects mice doesn’t mean it will work in humans. “Even though you may have a lot of reasons to think that a certain approach will be effective, you can never be certain until you do those studies in people.”

It can take 10 to 15 years or more to shepherd a new vaccine from concept to public distribution, and many candidates fail somewhere along this path. However, scientists did have a bit of a head start on COVID-19 based on what they’d learned about severe coronaviruses from the SARS epidemic in 2003 and from several MERS outbreaks.

“There were several vaccine candidates designed that never made it out of preclinical trials because SARS went away,” Cameron says. “That has allowed vaccine research to hit the ground running and get vaccines out quicker.”

Cameron is currently investigating how people’s immune systems react to COVID-19 while they are sick and how this compares with the immune response caused by SARS. He and his colleagues hope to determine what makes certain people more vulnerable to severe forms of COVID-19, which could play a role in how well a particular vaccine works for them.

“An effective vaccine for one person may be different from an effective vaccine in somebody else,” he says. “There may be a one-two punch in terms of the vaccines that need to be delivered on the market to fully vaccinate the population: traditional vaccines and intranasally delivered vaccines.”