Cockroach milk may open the door to better supplementation for humans...but don't drink it 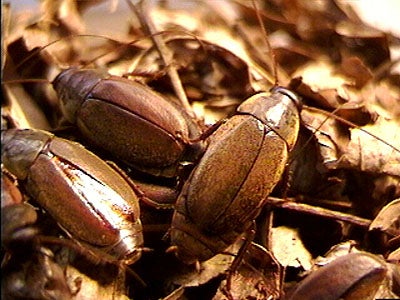 Last week must have been difficult for katsaridaphobes. A new paper revealed the most potent milk in the world belongs not to a mammal, but a cockroach. Known as Lili-Mip, a crystallized form of protein, sugar, and fats appeared to be the perfect nutritional supplement. Understandably, many suggested this could be one day the next superfood to improve our own lives.

This suggestion, while humorous because it is gross, is also is a little extreme. After all, humans and cockroaches differ significantly in nutritional needs. Not to mention, as in the case of human breast milk, Lili-Mip is intended solely for developing cockroach embryos. Based on these two points alone, the idea of drinking cockroach milk is obviously not a good idea.

But, a deeper inspection of the paper itself reveals far more than what has been reported. The study has revealed a number of very interesting concepts in chemistry. Perhaps even more importantly, the analysis of the mixture may provide us with a blueprint to develop superfoods for humans with little or no link back to the roaches.

The paper attempted to understand how the larvae of a particular cockroach species, Diploptera punctate, better known as the Pacific beetle cockroach, acquire nutrients from their mother. Based on decades of research, the process had been figured out. The mother feeds the offspring with liquid milk, which increases the protein concentration in the embryo – up to 60 times higher than without the nutrient. But this rather high amount of nutrition isn’t used up all at once. Instead, the milk is crystallized in the gut of the embryo and used slowly over time.

For the authors, this was the real interest – naturally made crystals from a living creature. They’re rare and as a result, chemical analyses are few and far between. Their goal was to understand how the roaches achieved this feat at the molecular level and whether there may be any chance for replication in the lab.

The analyses were done using naturally made crystals from the embryos. A variety of chemical structure techniques were performed to get a sense of the various structural parameters. By the time the analyses were complete, the structure of Lili-Mip was deduced as well as the mechanism behind its formation.

The Lili-Mip structure was similar to a group of molecules known as lipocalins. These are usually designed to enable transport of molecules within the body. However, in this particular case, the protein seemed to act as an inventory. When the concentration of nutrients was too high, they would be trapped up in the crystals. If there was a need for the nutrients, they would be released for use.

The other nutrients in the crystals were fats necessary for proper growth and sugars attached to the protein. The fat molecules were cholesterol, linoleic acid, and oleic acid. All of these are found in breast milk and are needed to ensure a healthy child. The same apparently applies in the case of the roach. As for the sugars, the most prominent happened to be mannose. This sugar is of particular importance for the human fetus and is also, not surprisingly, present in breast milk.

As a result of these findings, one might feel this milk may be the perfect supplement for humans. But the human gastrointestinal system is not remotely similar to the cockroach midgut. As a result, the use of these crystals might not provide any significant improvement in nutrition. In fact, such a high protein load might have deleterious effects.

But the results do offer promise for the development of nutrients for humans, particularly those suffering from low food security. Milk uses fat as a binding agent and as such is perishable. A change to protein as the major adhesion factor may offer the opportunity to increase shelf life such that nutrients can be delivered without fear of spoilage.

The authors also showed crystallization of the roach milk occurred through a process known as supersaturation. In essence, by increasing the amount of the nutrient, the crystals would form. With further testing using human nutrients, this method may one day allow us to provide an edible – and maybe even palatable – source of nutrition.

This option for supersaturated crystal supplementation is years away but the door is opened to a new path to prevent malnutrition, particularly in lower income regions. With animal and eventual human trials, the cockroach crystal milk may be a new route to ensure food security worldwide. Sadly, the likelihood that this will cure anyone of katsaridaphobia is relatively low. But at least these people can be confident that no one is ever going to ask them to drink cockroach milk.