Click Your Way To Discovery In CERN’s ‘Particle Clicker’ Game

The discovery: It's amazing how much time one can spend clicking. 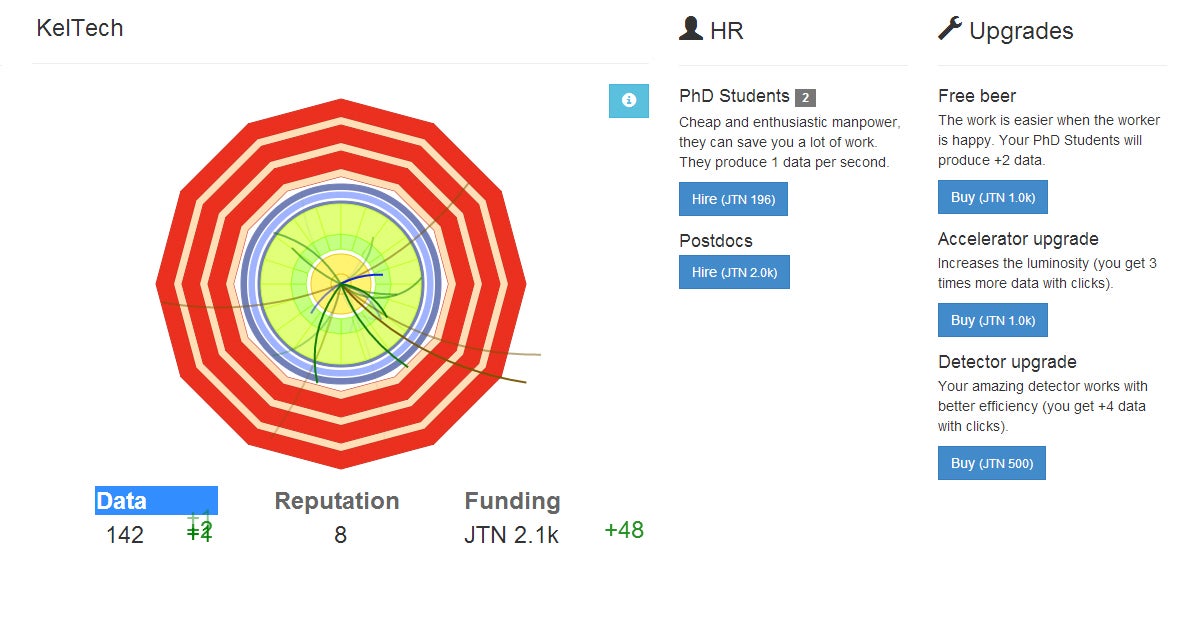 The only thing holding back scientific research at my virtual lab was not enough free beer. Thanks to a new game by a group of scientists at CERN, scientific discovery is reduced down to its most basic element: Doing the same repetitive action over and over and documenting any change. Particle Clicker, created at a CERN 48-hour hackathon, dresses up a popular time sink in researcher’s clothing.

At the game’s onset, you start with an abstracted image of the Large Hadron Collider. Then, each time you click on the particle accelerator, you generate data. With enough data, you can select projects that enhance your reputation. As data and reputation increase, so does funding, and with funding, you can hire workers like Postdocs or PhD students. You can also buy upgrades for those workers, like beer and coffee (true necessities for research).

A few hundred clicks of the mouse later, and you’re laboratory is operating like a well-oiled machine.

If any of this feels familiar, it’s because the game is an adaptation of another, less sciency time suck: Cookie Clicker. In Cookie Clicker, the “work” is done largely by grandmas and machines, not underpaid academics, and the terms are more fantastical. Still, both games revel in abstraction: Cookie Clicker eventually lets players buy a hive mind upgrade for their baking grandmothers, and in Particle Clicker, and endless supply of free beer and strong coffee turns into science. I don’t know yet if original 4Loko is available in the game, but if it is, I expect my researchers to find the answer to life, the universe, and everything shortly after ingesting it.

Despite the humorous approach, Particle Clicker bakes laboratory science into the game. Data is spent on research projects, and these projects range from symmetry principle violations (a problem of matter versus antimatter) to research on the Top Quark, which is the heaviest of all quarks. This is intentional. Igor Babuschkin, the student who proposed the game, said the games’ creators “thought it would be good to have an addictive game that sneaks in some physics content.” However, I learned more about the game’s research projects by Googling them, rather than from the game itself.

Still, for all the activity possible, both clicker games reward a player who puts in place a powerful, automated machine, and then mostly lets it run itself. Players check in to purchase new upgrades, but actively tending to the game as the numbers climb is pretty boring. The end result is a game that is more fun the less it’s played. Occasionally, great scientific progress is made by simply letting things be, like Alexander Fleming’s fortuitous grossness letting him discover a mold that killed bacteria, and Particle Clicker encourages that kind of thinking. In fact, the only thing a diligent player can discover that a passive player can’t is the answer to where their free time went.