What If Oscars Were Made Of Solid Gold?

For one thing, there would be a glut of aspiring cinematographers and sound designers. 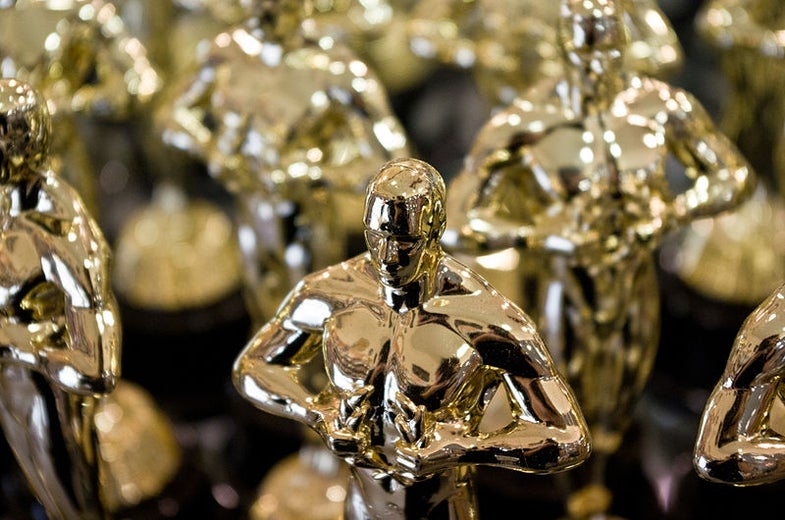 The only thing better than winning an Oscar would be winning one made of solid gold.

On Sunday night we will see our favorite stars and cheer for our favorite movies. We will laugh at the gags and guess how long the recipients have until they are played off stage. More than twenty times we will see some lucky winner bounce up to the microphone and stare into that golden statuette.

The classic Oscar statuette stands a little over a foot tall and weighs eight and a half pounds—about as much as a gallon of milk. Sadly, the weight doesn’t come from a solid chunk of gold; it comes from a tin and copper core. The gold statuette is merely gold-plated. But in the spirit of “Oscar gold,” what if we do some alchemy and transform all the Oscars you will see on Sunday into 100% pure gold?

The price of gold has been fluctuating for years, but it’s still extremely valuable. Just an ounce of the stuff today would cost you around $1,600. Given the weight of an Oscar statuette, one made out of solid gold would be worth $219,000. That twinkle in a winner’s eye would be more than just a realization that he or she is a decent actor; it would be the joy of holding a chunk of metal worth a new Lamborghini.

In fact, just handing out twenty or so solid gold statuettes on Sunday would cost the Academy more than the theater in which they hand them out cost to construct.

Let’s take it even further. A fair estimate says that there have been 10 billion ounces of gold pulled from the ground since we started coveting the shiny stuff. Hammering all the gold ever mined into Oscar statuettes would produce an army of 74 million awards, worth (at today’s prices) 16 trillion dollars. If all these awards stayed in the US, after we used them to celebrate our actors we could melt them down to pay for the Iraq and Afghanistan wars 16 times over. Hooray, fictional capitalism!

But for all the loveliness of gold, it’s hardly the most precious material out there. If we really wanted to celebrate acting, we could make our Oscar statuettes out of antimatter.

The Annihilation of Daniel Day-Lewis

Created by smashing particles together, the production of antimatter—like regular matter but with an opposite charge—is insanely costly. To make basic antimatter, you combine anti-protons with positrons (electrons with a positive charge) to form anti-hydrogen. Sounds straightforward, but you need massive particle accelerators to get the job done. Not only do you need the largest machines on Earth, you also need to overcome serious inefficiencies. For every 1,000 anti-protons created in a particle accelerator, 999 escape.

Physicists in 2010 claimed that at maximum production they could make ten million anti-protons per minute. But even if the conversion from anti-proton to anti-hydrogen were 100% efficient, it would take 100 billion years to make just one gram of the stuff. All things considered, obtaining this elusive material would cost 62.5 trillion dollars per gram.

The monetary value of an antimatter Oscar statuette would be a stack of dollar bills so high that it would take light nine and a half days to reach the end of it.

Imagine what would happen if we obtained enough anti-hydrogen to forge an antimatter Oscar with the same mass as a real one (an anti-hydrogen Oscar would be much larger than a gold and copper one, because of the low density of anti-hydrogen). An eight-and-a half-pound Oscar statuette made of antimatter would cost two hundred and forty one thousand trillion dollars (that’s fifteen zeroes!). There literally isn’t anything on Earth to compare this cost to, so what would this much money look like? Well, according to the tried-and-true stacking-dollar-bills analogy, the monetary value of an antimatter Oscar statuette would be a stack of dollar bills so high that it would take light nine and a half days to reach the end of it.

The more pressing problem for an antimatter Oscar statuette would be handling it. Once the statuette touches any real matter, even air, it will annihilate, or release all the energy contained within the atoms of a corresponding mass. If eight and a half pounds of antimatter statuette touched the outstretched hand of Daniel Day-Lewis, for example, it would release an unfathomable amount of energy. According to E=mc2, the annihilation of Daniel Day-Lewis would yield a fiery explosion of light and energy equivalent to seven times that unleashed by the eruption of Mount St. Helens.

The catastrophe would level Los Angeles, leaving a gaping hole not just in the city, but also in the talent pool of Hollywood. Generations would go by before we had the high-caliber actors and directors capable of making the next Jaws or Casablanca or The Dark Knight. Economies relying on movie production and sales would crumble. Throngs of people would migrate from the devastated Los Angeles to a new location, burdening the local population with impossible energy and food demands.

If I were Daniel Day-Lewis, I’d avoid the antimatter Oscar.

Kyle Hill is a freelance science writer who has been featured in Wired, Scientific American, and Nature Education, where he overthinks everything. You can follow him on Twitter as @Sci_Phile or at his website.