Taking a lesson from chocolatiers 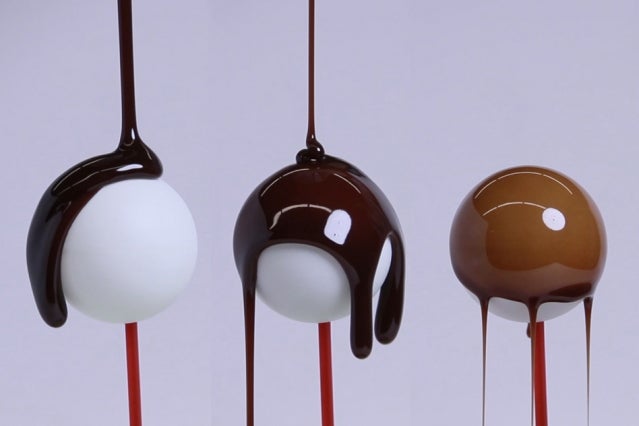 There’s nothing quite like taking a bite of a bonbon, cracking through the thin outer shell to taste the gooey sweet surprise within. Though chocolatiers have been perfecting that outer shell since the 1600s, scientists didn’t quite understand the variables that would alter the thickness of those round shells. Now a team of researchers from MIT has developed a technique to predict the thickness of a round shell, which could be used to help scientists consistently create them with different materials far outside the confectionary. The researchers published a study about their technique today in Nature Communications.

Normally, chocolatiers make the bonbon shells by pouring chocolate into a round mold, then flipping it to get rid of the excess chocolate. What’s left is an undisrupted shell that has a consistent thickness all over. The scientists altered this method slightly in their study—they poured a stretchy polymer compound over round molds of different sizes, letting the excess drip to the bottom. After giving the polymer a few minutes to harden, they would remove it from the mold and measure the thickness of the resulting shell.

Based on the dimensions of the round mold and the speed at which the liquid moved over it, the researchers were able to come up with a mathematical formula that could predict the shell’s thickness. The larger the mold, the longer it takes for the liquid to completely cover it, which results in a thicker shell, as the press release states. The researchers also found that altering the amount of time the polymer hardened also let them control the thickness of the resulting shell. Surprisingly, the height from which the liquid was poured and the volume of the initial liquid didn’t affect the shell’s final thickness.

Understanding the forces that can change a shell’s thickness could help researchers create shells with a predictable thickness and a uniform consistency at an industrial scale. That’s useful for a range of products, including pills (the thickness of the coating can change when the medicine is released in the body) and aerodynamic vehicles such as airplanes or rockets, according to the press release. The researchers next plan to look at the dynamics of shells made with an elliptical mold.