Just One All-Nighter Can Alter Your Genes, Possibly For Years To Come

So go to bed, now 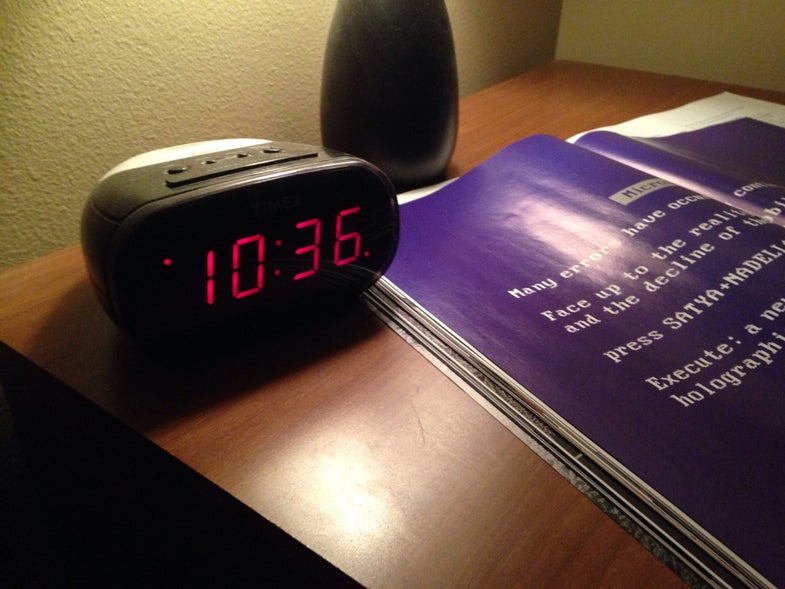 There’s a new reason to go to bed on time: late nights, in addition to a multitude of health effects, may lead to obesity and diabetes.

Countless studies have shown the negative effects of sleep loss and sleep deprivation, but a new one from a Swedish team suggests that even one night of missed snoozing can have long-lasting effects on your genes.

The study, which points to specific “clock” genes–components of the circadian rhythm found throughout the body that act like tiny clocks to synchronize our internal master clock–in muscle and adipose tissues, suggests that a missed night of sleep throws our metabolism for a loop, and can lead to increased risks of obesity and diabetes.

“We had this idea that we could induce these quick genetic changes because at the time there also came a study from one of the collaborators of this study that if you exercise at high enough levels, you can induce these genetic changes in your muscle,” says Jonathan Cedernaes, a neuroscientist at Uppsala University in Sweden and the lead author of the study. “So we wanted to see whether sleep loss, which is a different kind of stressor and a negative one, could also lead to these kinds of changes.”

Clock genes are essential to controlling how our tissues work as they regulate the on-off function of many metabolic processes and perform this job in a timed fashion, says Cedernaes. Some processes are turned on during the day when you are eating while some happen at night when you are fasting and your body is repairing itself. By staying awake through the night, a typical scenario for shift workers, you are inducing what is known as circadian misalignment–where your internal circadian rhythm is thrown off.

The study focused on the regulation of these genetic clocks to see if misalignment also occurred. Cedernaes studied a group of young, similarly active and built men. Before the study, they made sure they had normal activity patterns, meaning they had regular sleep habits and food intake.

During the two-night study, they gave the participants one night to adapt to their new environment before they began their night of sleep deprivation. On the second night, they randomized the participants into two groups; one group stayed up all night and the other, acting as the control, got a normal night of sleep. After each night, researchers took blood samples as well as fat tissue samples from the abdomen. They found extreme changes in the genes of the deprived subject’s metabolism–specifically, they found impaired glucose tolerance. “This is pretty exciting that all of this happened after one night of sleep loss,” says Cedernaes.

That’s bad news for people like shift workers, who may take on the occasional overnight work for extra money, or the hourly employees who do night-time rotations on occasion.

Furthermore, while the study participants fasted all night, Cedernaes thinks it could have compounded the problem if the subjects were continuing to eat as most people do during shifts. Studies in rats showed that rats who were fed off of their normal feeding times suffered worse complications than those that were fed on a normal schedule. “There’s also a large set of literature from animal studies suggesting that if you [eat] at the wrong time, as often happens to shift workers, there will be additional consequences,” says Cedernaes.

He says that light has also been known to shift circadian rhythms as well as the presence of melatonin. While that wasn’t the focus of the study, it’s definitely clear that things like screens and fluorescent lights adversely affect those who are sleep deprived. In fact, that’s the next goal of the research group: to continue to study multiple factors–including the impact of light and diet–and begin to assemble a larger picture of what happens to your body when your circadian rhythm has been altered, even by one night of sleep.

He also says there’s some precedent to believe that while negative effects come rather quickly, the switch back may not happen as fast. “It could certainly be the case that though they’re induced quickly, they’re not reversed [as] quickly.” Cedernaes plans to look at whether shift work or other kinds of sleep loss paradigms have lasting effects that can be noticed by analyzing someone’s genome. In other words, the damage from those all-nighters in college or those cheap red-eye flights may already be done. Or at least that’s the hypothesis Cedernaes and his colleagues have.

“There are hints to that,” he says. “If you look at someone who’s worked shifts even if it’s in the past, there is some chronic exposure risk that’s been linked to sleep loss.”

So close the laptop on time tonight, because you might end up regretting it for years to come.