Will Mind Transfer Ever Happen?

In Self/less, a dying billionaire "sheds" his mind into a younger man 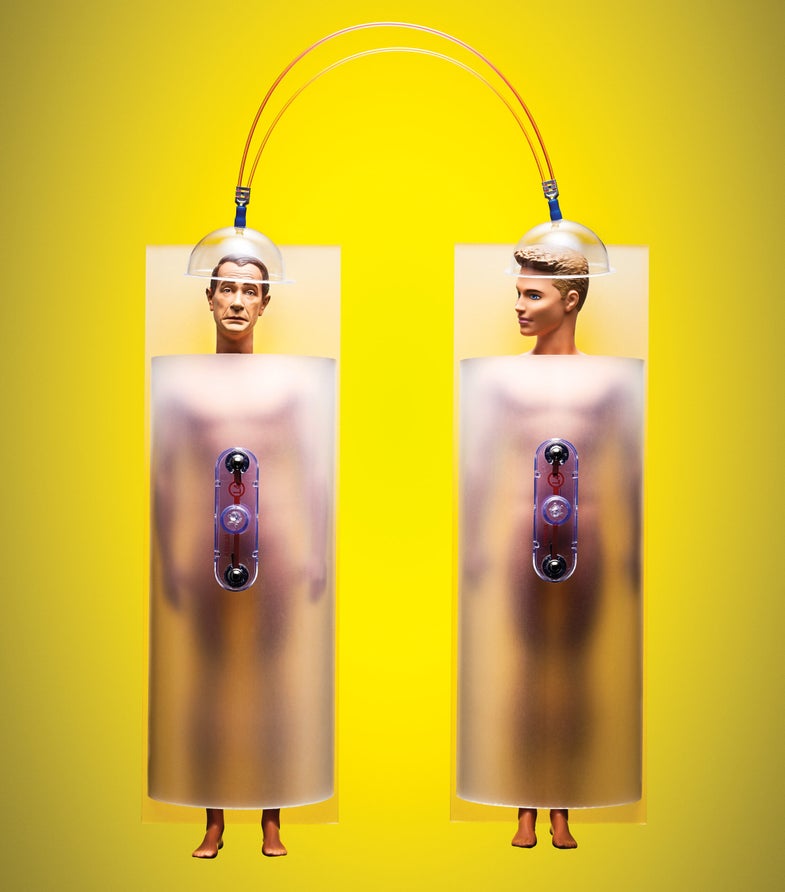 It’s tempting to imagine the brain as a biological computer, with the tissue as hardware and electrical activity as software. If that were the case, mind transference might be technically feasible (albeit ethically fraught), at least pending the development of some extremely advanced electrode arrays. Extricating mind from matter, though, can’t be done. “The self is in the structure,” says Charles Higgins, a University of Arizona neuroscientist and electrical engineer. “It’s in the interconnection of 100 billion neurons, and in the individual shape of neurotransmitters and receptors.” Even if surgeons could successfully transplant a brain, they would have to transfer the spinal cord as well, or risk stripping the subject of a lifetime of muscle memory.

One workaround, says Higgins, could involve cloning. A clone with a structurally identical central nervous system could perhaps be stimulated with electrical signals that mimic the original. However, human cloning is itself still the stuff of science fiction, and neuroscientists have so far mapped the connections between only about 100,000 neurons at once–the equivalent of a worm or fish brain.

What scientists can do today is rewire the brain in situ. For example, Columbia University researchers implanted deep-brain stimulators in people with severe treatment-resistant depression. When they sent electrical impulses to precise areas, the patients’ symptoms instantly diminished. After two years, one person reported that her depression had disappeared completely. As scientists stimulate more patients’ brains, they could unlock other possibilities. “We might accidentally discover, as we’re trying to stop someone’s epileptic seizure, that we can stimulate a pattern in the visual cortex to create a memory,” says Higgins.

So body-hopping immortality is off the table. But with enough time, and a lot of experimentation, humans might find a way to load memories and learn skills like characters in The Matrix.