Digitizing The Oceans In Real Time 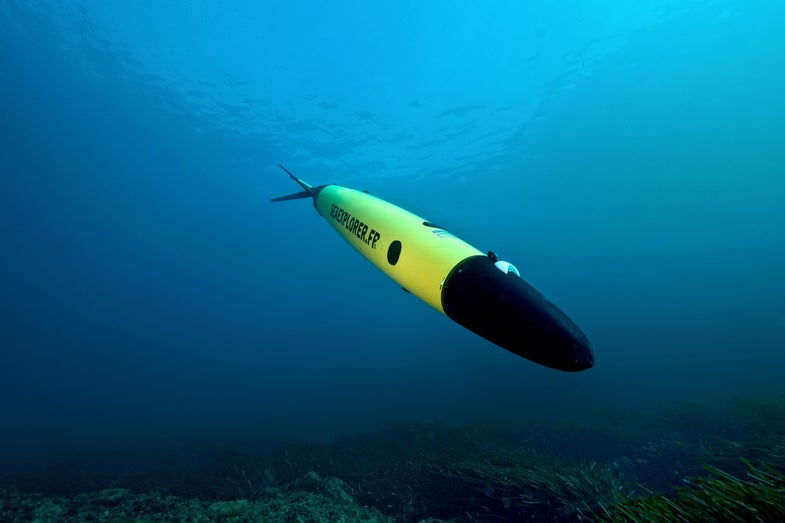 Over the summer, while the rest of us were getting tan (via lasers, of course, as is PopSci’s style), the National Science Foundation’s R/V Sikuliaq took a 39-day Vision 16 cruise. It wasn’t exactly a typical cruise.

Rather than kicking back, the crew was busy surveying the cables that feed a network of observatories collecting open-access marine and climate data, called the Ocean Observatory Initiative–the newest chess piece in the NSF’s campaign to stitch together a massive data collection network.

Harvard biologist Peter Girguis assures PopSci that “Let’s put [an array of sensors] on the seafloor and see what it can do” was part of the thought process guiding the NSF’s move to deploy the multi-million dollar network of autonomous lab equipment and underwater vehicles. Sadly, it was not the sole motivation behind it.

After all, it took $386 million and a nearly a decade of development, but finally up and running, the OOI is “the largest fixed oceanographic observatory in the world,” according to director Greg Ulses.

Translation: by size, scale, and terabytes, this set-it-and-forget-it web of fixed lab equipment dwarfs any other system collecting data on the ocean. Drawing from a network of 830 instruments on 83 platforms across seven different sites, the OOI digitizes the oceans in real-time, into a data stream on everything from pH to temperature, accessible to anyone, from anywhere.

And less than two months into its debut, the Vision 16 cruise put in some upgrades to the system, the equivalent of a periodic cell phone update. The system’s instruments and cables are all modular, designed to be regularly swapped for new hardware. But, minus requiring a cruise ship full of engineers to hack out the old components and drop in the new, as part of a plan to expand the platform’s technology over the next 25 years, it’s practically the same as a cellphone update.

Nonetheless, the OOI is back up in full force, and addressing what Girguis believes is a fundamental challenge of oceanography–one that makes the cruise’s name oddly appropriate: visibility.

While drones and hyperspectral satellites can easily monitor events on land, even an ultralight beam starts scattering 50 meters into the electromagnetically opaque ocean, preventing scientists from getting a clear picture. Similarly, the glut of oceanic data we already have is largely scattered and unorganized, so marine scientists have to overcome both a literal and figurative lack of visibility. “The OOI, and all these other various” oceanic mapping programs, are a pretty big deal for many ocean researchers. They produce far more data than is usually published, and can “stitch it together in such a way that a new generation of scientists can look at it with their fresh, computationally savvy eyes,” said Girguis.

The “all these other various programs” bit is where things get exciting.

For several years, the international community has been working under an joint initiative spearheaded by US and EU, called COOP+. Piloted by the NSF, on the American end, its mandate is to expand the Global Earth Observation System of Systems or GEOSS: a massive web of open-access networks that bring Big Earth Data to scientists, courtesy of arrays of sensory equipment. Alongside other international programs, and the massive DataONE database fed by them all–the OOI is just one (albeit particularly large) data source among the many that the NSF is campaigning to combine.

But the best insight into the scale and precariousness of this behind-the-scenes chess game comes from NEON, or the National Ecological Observatory Network, which will function as a cousin to the OOI when it launches in 2018. Through eighty-one field sites, a National Oceanic and Atmospheric Administration data center, and partnerships with dozens of universities, NEON will collect air, sea, and land data in real time. However, the program’s development hasn’t exactly been smooth. Prior to recent management changes, it suffered delays, more than a few mishaps with a $469 million budget, and subsequently, a fair share of opposition from both budget-minded Republican House committee members, and from within the oceanographic community.

Once online, though, NEON will be simply one of thirty-one data suppliers for DataONE, which itself is just one particularly large repository fed mostly with information from the U.S. and the E.U, all buried within an international web that’s effectively turning the entire Earth into 0’s and 1’s.

So, next time you’re on a cruise, kicking back with a copy of PopSci and getting the latest on the fight to research climate change and study ocean wildlife, remember–on their cruise, a bunch of engineers built a digital Eye of Sauron that’s powering that fight…and tracking your ship’s carbon footprint.