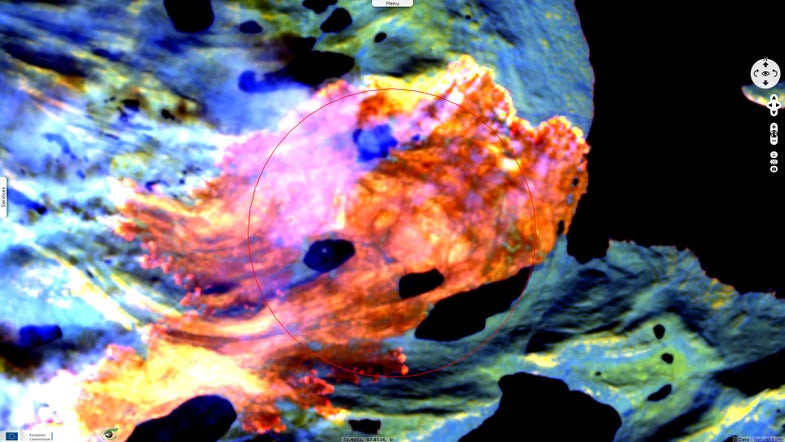 Fire fronts are visible at the edges of the burnt area. VisioTerra
SHARE

Earlier this summer, Greenland caught fire. If it seems strange that a country 80 percent covered by ice could catch fire, that’s because it is strange.

While the grassy, carbon-rich peatland that makes up much of Greenland’s green space has caught fire before—usually as a result of a lightning strike—this fire was different. Those earlier fires were tiny. This recent fire, which lasted two weeks, was then country’s largest, most sustained fire on record. It’s regarded by many as yet another sign (on top of this unfathomably destructive hurricane season) that our climate is warming and changing.

In order for a fire this large to develop, Greenland didn’t just need a catalyst; it also needed tinder. In this case, the fire found its fuel in the form of large areas of degraded peatland dry enough to sustain flames. That peatland was left parched by the melting of permafrost as temperatures rise, leaving plenty of dry kindling to feed the fire.

The impact of the wildfire’s smoke was even more devastating than direct effects. Soot from the fire likely deposited on the region’s ice sheets, darkening them. Dark surface are worse at reflecting heat, so soot could make the remaining ice melt even more quickly than it already is.

Science consulting firm VisioTerra recently analyzed and released images captured by Sentinel 2 (a European Space Agency satellite) between July 28 and August 12. The images are a stunning, depressing reminder of how humans are altering the climate. But Greenland’s blaze was only one of many in an incredibly aggressive, unusual fire season. Even now, fires are raging across northern Africa, Spain, Turkey, and Eastern Europe, as well as the western part of the United States.