When your roommate is also your room. 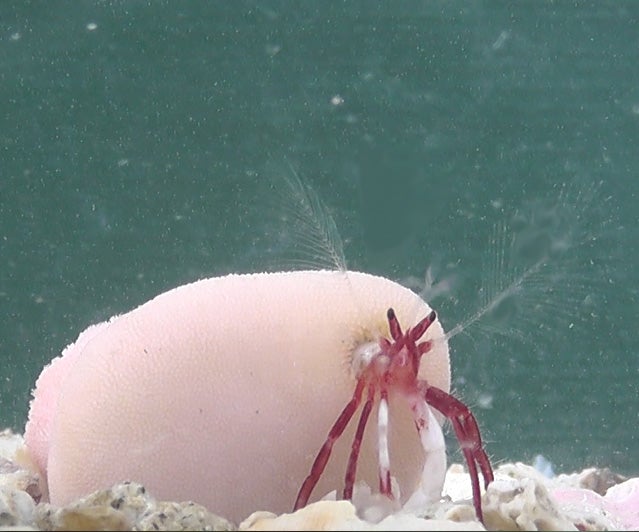 A tiny bit of pinkish cotton candy scurries its way along the sandy substrate. Other squishy-looking blobs rest until disturbed, perhaps by a sudden influx of sand or dirt, and then wriggle their way free—with the help of a worm that lives comfy cozy inside each globule.

During a survey looking for life on the seafloor of the Oshima Strait in southern Japan, ecologist Makoto Kato collected one of these specimens of walking coral, a group of species far more adventurous and mobile than its reef-dwelling relatives.

But back in the lab, he noticed that instead of the symbiotic worm he expected to find poking out of the coral, there was a small pincer. When Kato and his colleague, Momoko Igawa, opened the coral up, they found a slender hermit crab.

Intrigued, they went back to see what else they could uncover. In observing and collecting specimens, they found a new species of hermit crab—and a new set of biological relationships between those crabs and two species of walking coral that live in the area.

Their results were published this week in the journal PLOS One.

The odd couple of crab and coral seem to have gotten together thanks to a fortuitous set of evolutionary circumstances. Walking corals initially make their homes on the outside of small abandoned shells. The interior of the shell is perfect for a sea worm called a sipunculan, which looks a lot like a peanut. A spinuncula acts as the coral’s ‘legs,’ digging it out of trouble and moving it to a food source as needed.

Hermit crabs, like the worms, also prefer the inside of a shell to the exterior, and at least in this specific area of Japan, this new red and white species of hermit crab Diogenes heteropsammicola makes its home in the living corals. In exchange for being the legs of the operation, living with a coral has an added benefit for D. heteropsammicola: instead of having to change houses as the crab grows, the coral can grow with it.

“The original small mollusk shell remains buried in small corals, but eventually disintegrates as the coral grows. It is said that the coral dissolves the shell,” Igawa says.

The corals also provide protection to their symbionts, worm or crab, with stinging nematocysts that harm predators who get too close. The relationship between the crabs and the corals is odd in some ways, because the crabs seem to have cut into a niche that spinunculans carved out over the ages.

Igawa hopes to continue the research, not only looking for species like this living in the present, but also those that lived in the past.